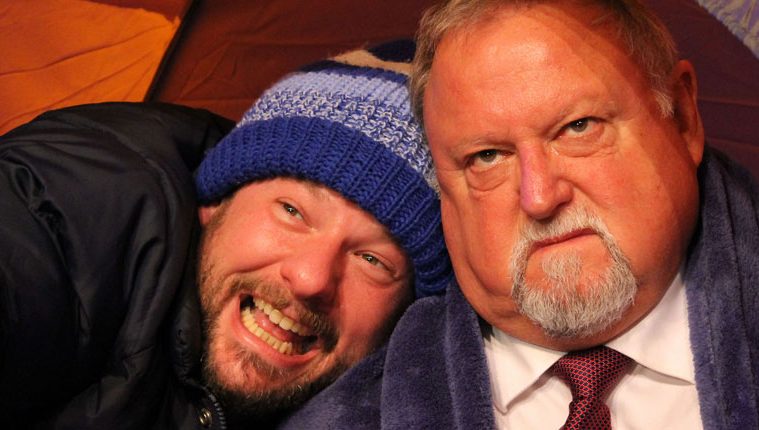 David Wald and Rutherford Cravens in the MST production of Up Close Space.
Photo by Kaitlyn Walker.

When we first meet editor Paul Barrow, the protagonist of Molly Smith Metzler’s Close Up Space, making its regional premiere at Main Street Theater (MST), he’s self-righteously ripping through a series of emails from the headmaster at his rebellious daughter’s boarding school, tearing apart extemporaneous words and phrases, “emaciating the prose,” and “making it obey.” Grammarians will love the curmudgeonly Paul, especially as he makes his unwieldy journey through all that grammar and all those rules to finally close up the spaces he’s created so he can say what’s in his heart.

It’s a journey that brings the audience along on a ride that’s often bumpy, occasionally poignant and sometimes downright hilarious. This is a wordy piece, accented by Metzler’s sparkling speeches and more than helped along by a gifted cast and director.

Close Up Space (and it’s the verb, to close, as in closing the door, not coming closer) premiered to lukewarm reviews when it first opened at the Manhattan Theatre Club, but even with the play’s shopworn themes (the troubled daughter/distant dad relationship, a man of a certain age clinging to traditional rules of conduct and writing), it’s exactly the kind of show Main Street does superbly: small cast, dynamic dialogue, clever musings on what it means to be connected to one another.

It boils down to this: Paul’s daughter Harper is about to tossed out of her boarding school. Meanwhile, he’s trying to wrangle both the ego and the manuscript of his biggest author, Vanessa Finn Adams, and he is caught up in an emotional maelstrom at the office, courtesy of his office manager Steve, who’s had a bad breakup with his dog and roommate, and keeps getting deer-in-headlights stares from his new intern, Bailey. If all that weren’t enough, when Harper inevitably shows up, she’s still angry over the suicide of her mother four years before – and she insists on only speaking Russian.

And you thought Tolstoy and his unhappy families had it rough. The whole thing could either be cloying or clichéd, but at MST  it’s done so deftly, with such impeccable timing, you might find yourself wondering if you missed a line because you were laughing so hard, or feel like someone gave you a gut punch you never saw coming.

Joanna Hubbard and Rutherford Cravens in MST’s production of Up Close Space.
Photo by Kaitlyn Walker.

Rutherford Cravens leads the cast, capturing a million little complexities of Paul’s character, and making this sometimes-jerk-of-an-editor not only sympathetic, but often likeable (that is, if you like under-emotional, compulsive grammarians). His opening monologue is brittle, perfectly blending the character’s disdain for those who trash grammar and his own belief in it as a values system, but throughout the evening, he softens and sharpens, delivering an evolutionary acting style the way you’d peel the layers of an onion. Joanna Hubbard (Harper), last seen in MST’S Memory House, shouts and stamps in Russian, all revolutionary firebrand and teenage angst, eventually shining in the moments where she deconstructs her late mother’s novel, and declares her own independence.

David Wald, who was a delight in MST’s Love Goes to Press, is effervescent, part surfer dude, part Zen master, filling his Steve with perfect comic timing and charming off-beat pathos. Carolyn Johnson could’ve stepped into some unavoidable diva stereotype as Vanessa Finn Adams, but her acting’s solid, even when she’s telling Paul that she “speaks woman,” or that her latest book is “the Kilimanjaro of my game.” She’s a winning personality: better, though, in Vanessa’s quieter moments than channeling someone out of The Devil Wears Prada. Brittny Bush plays Bailey with youthful naiveté.

Andrew Ruthven directs the cast with a thoughtful hand, achieving both laugh-out-loud comedy and introspective emotion. Ryan McGettigan’s set is so appropriately old-style New York Office, I half expected to look out the windows on set and find the view from the real Broadway and 22nd Street. Eric L. Marsh’s lighting occasionally delivers a halcyon glow to the piece, useful as it moves from comedy to drama and back again.

Close Up Space may not have re-invented the wheel with its human comedy — five characters spinning about, looking for ways to come together — but its homage to language and its structure provide a thought-provoking hook for what it means to communicate.

—HOLLY BERETTO
Holly Beretto writes about food, travel and the arts; her feature on local authors is in this month’s issue of Change magazine.