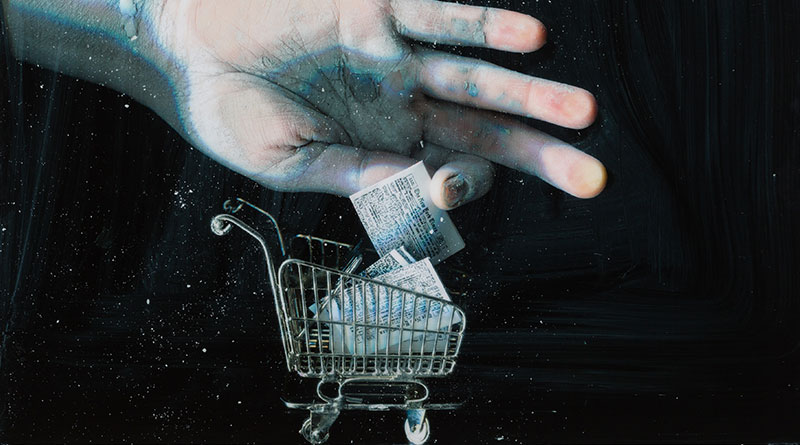 Collages of Consumption: Lucie Stahl at Dallas Museum of Art

The next person you see rummaging through trash in public could be a celebrated artist. Lucie Stahl is trying to make sense of the world through an omnipresent culture of consumption. There’s a sting of truth when people joke about being raised by televisions. Today, screens enter a child’s life before they can even talk. Born in Berlin, Stahl did not start watching television until the age of eight and became immediately fascinated by commercials. Concentrations 60: Lucie Stahl runs through March 12, 2017, at the Dallas Museum of Art.

With imagery that seems to emerge from deep black pools, Stahl’s mixed media works are dark and alluring. Stahl uses found objects to address themes of consumption, excess, and gender identity.  She flattens her collages by capturing them with a flatbed scanner.

Stahl’s work is hauntingly mysterious, but not abstract or pedantic. This exploration of branding, advertising, and propaganda offers a bleak view of humanity. But the delivery is as direct as you would expect from a screen or poster. The shiny veneers also suggest mirrors.

“I assemble loose objects,” Stahl says. “I am always trying to give up control.” Relying heavily on chance, improvisation, and intuition Stahl arranges objects she owns or finds, placing them in the eye of the scanner. The items are typically junk products that are mass-produced, branded, and marketed. Coke cans spew out bodily fluids, flowers, and pomegranate seeds. The meanings of pop culture and propagandistic imagery are conflated and confused. In her collages, polarizing stereotypes no longer exist.

The generic titles do not appear dark or sinister, but strip down and expose the subject. I Am is a wall of boxes for tea and herbal remedies made specifically for women’s health. It references the indoctrination of advertising.  The notion that medicines and remedies are required in order to be yourself, stay healthy, or perhaps just to be a woman.

“I am really interested in this fluid notion of identity that is being articulated by a younger generation of artists,” says Gabriel Ritter, for whom this will be his final work as the DMA’s assistant curator. He left the museum earlier this year to be Curator and Head of Contemporary Art for the Minneapolis Institute of Art.

Stahl’s work embodies this fluidity. Solely the artist’s hands, filthy with matter that suggests a puppet master reaching out of the earth or a toxic abyss, frequently represent the human form and element. This literally captures Stahl’s hands in the work, underlining the physical approach of her creative process. But arms are gender neutral. Stahl’s arms in particular are also ageless enough to easily pass for elderly or adolescent.

Fluids that could be blood, sweat or spit are made concrete with the flatbed scanner. The image is enlarged to the size of a poster that would hang from the wall of a teenager’s bedroom. From there, Stahl pours glossy epoxy resin material on the photograph, encasing it in a gritty surface.

Along with Will Benedict, Stahl ran Pro Choice, an exhibition space in Vienna from 2008 to 2012. She is a vital representation of the aesthetics of that scene. Stahl is also an example of artists using new approaches to visualizing. The role of photography in her work, for example, is that these are not necessarily photographic images. Stahl’s photographs occasionally appear in her collages, but this work is created with an industrial process that involves killing several flatbed scanners a year.

This studio practice is an easily mobile platform. Stahl has used this to her advantage, drawing inspiration from setting up shop in cities like Los Angeles, London, and many places in between. Her studio is wherever she is. Collecting items from surroundings that could be desert landscapes or strip malls, Stahl creates her collages with magazine clippings, food, photographs and trash.

With several loans from international collections, this exhibit includes cornerstone pieces from Stahl’s career as well as a few new works. “The show circles around various themes,” says Stahl. “In this case each work is standing on its own ground rather than competing together as a whole concept of a show, which is something new and interesting to me.”

At a single object show at Paradise Garage in Los Angeles, Stahl put an aluminum pipe through her image and the wall, allowing viewers to look outside from inside the gallery. For a recent show in Berlin, Stahl revisited this idea with a more complicated approach. Using a series of mirrors and periscopes, viewers could look through her art and see the outside world. For this exhibit, Nature uses the same approach with an oculus allowing viewers to peer through a freestanding wall at windows.

It also has imagery that seems psychedelic. “To me it looks like a drugged-out Smurf,” Ritter says. This addresses the branding of nature. But the experience of peering into a hole to see a bizarre representation of nature itself seems like a drug reference. Perhaps this hole is not so much a pipe as a leaking mind. These are also some of Stahl’s more abstract works, relying heavily on light to create landscapes.

But Nature also uses the idea of peering into another world through a work of art. “This exhibit really touches on her interest in Surrealism,” Ritter says. “Whether it’s Surrealist techniques or imagery, there’s this idea that you could somehow pass through the image or you could look through it.”

The show also features eight of Stahl’s Prayer Wheels sculptures. These beer and soda cans are found with gunshots, crumpled, and sun-bleached. Viewers are allowed to turn these works, which makes them function like Tibetan Buddhist prayer wheels meant to bring wisdom and good karma. These found sculptures are surprisingly enigmatic and easily turn the idea of a prayer wheel on its head.

Humor was an explicit part of some of Stahl’s earlier work, literally spelled out with small text fragments she wrote. They resembled stand-up routines from comedians like George Carlin, funny but serious. Humor was used as a way of addressing themes, but the tone was essentially comedic. Only two pieces from this period are in the show. Created in 2011, An Apparition” and Not Okay have only existed digitally until now.

“In general I think my writing has become more serious,” Stahl says. “Not necessarily darker, but maybe less light.” Stahl no longer writes texts for her art and what remains of the humor is dark. New works do not include as many American culture objects, although there are some exceptions, like an image of Pringle’s cans that looks like smokestacks exploding. The focus of the show is on recurring themes in Stahl’s work. Big Gulp, for example, is a detritus of Big Gulps, sun-bleached enough to seem apocalyptic. Stahl frequently finds objects that have succumbed to natural decay after being thrown away.

Darker palettes and political references are prominent in the new works. Perhaps Stahl noticed the American presidential election. Hand gestures create donkeys and elephants. The hands work together to create an eagle. Hands that once presented collage elements become puppeteers. Oversized, they play with miniature props.

Stahl’s art leaves things in a murky grey area. On the one hand, it could be naïve, not making a stand for or against the issues she alludes to with imagery. But the work also embodies the idea of a fluid identity without diametric or clear oppositions, offering an oblique third stance. Stahl’s responses to issues like consumption are not standardized, which gives viewers pause.

The Concentrations series is now in its thirty-fifth year at the Dallas Museum of Art and Lucie Stahl is the sixtieth installment. “I think it’s an important milestone for the Concentrations series,” Ritter says. The program historically features emerging and underrepresented artists on an international level. But over the years, there has increasingly been an effort to give artists their first American solo museum shows, which is the case with Lucie Stahl.

“She’s had a lot of attention and exhibiting in Europe,” Ritter says. “But lesser so here. It’s great to be able to present that to a Dallas audience.”

—JEREMY HALLOCK
Jeremy Hallock is a journalist based in Dallas.