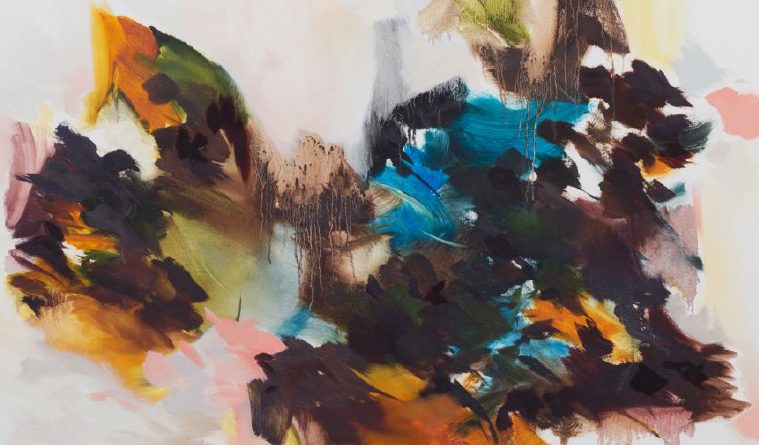 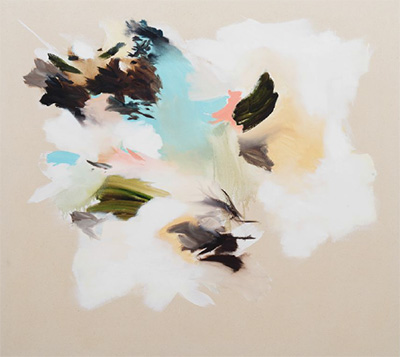 The floating mirages of Owen Drysdale’s Hot Summer Deadly Day are lovely, but bloodless. His title evokes the kind of blazing, vicious heat that we in Houston, Texas know intimately. We know that air and light of that ilk is a slap in the face, an assault on the eyes, and above all, exceedingly uncomfortable.

Drysdale’s paintings, conversely, are graciously organized, rife with airy spaces between languorous, impressionistic brushstrokes. They are entirely comfortable. In their looseness, they lack the contrast required to stoke passions, deadly or otherwise. Perhaps Drysdale, who has decamped from our steamy state to the relative summertime comfort of Syracuse, New York, has forgotten the immediacy of such heat- the way it’s initial offense seems to shock the brain and body into a slow-motion skitter to find shade. In Deadly Day, there is plenty of brilliant light and cascading color, but the viewer is never without relief. The artist’s palette and hand are always tightly controlled.

Mulberry (in the tread of my shoe) references the smeariness of a flattened berry, but it’s shot through with clean whites and the creaminess of untouched canvas. No mess. This berry doesn’t have the tension of an overripe fruit that might evoke momento mori, or even the fleshy lick-ability of a Wayne Thiebaud dessert. Vital reds and quick, evasive brushwork is hastily balanced by a rim of the palest icy blue; as though someone has turned on an air conditioner. 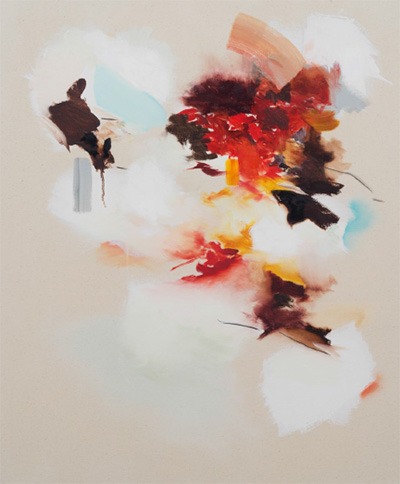 The swift turquoise of Way-Way Way Down Deep generates the brilliance of a sun-infused pool, but there’s nothing lurking in its shadowy depths. This splashy blue has a single note rather than the full range of expression one might expect to find in the way-way down. All this to evince that from a painter in the “emerging” stages of his career, the viewer craves some risk, and more than a little pathos. Deep feels uninvestigated in terms of both color and surface, and is therefore a bit like wading in the shallows.

Some of Drysdale’s compositions are twinned with loose canvases tacked to the wall. Each represents a gradient fade from one searing hue to white, to another searing hue at its opposite end (lime popsicle green to safety orange, for example). These litmus-like tongues of canvas loll from the wall to the floor, and represent Drysdale’s biggest departure from his measured expressionism. As objects, they speak more to his purported “memories and associations of a town in the heavy heat of summer,” in that they seem more specific, and far less edited. But they are safely separate from the cradled paintings, an assertion that never intrudes upon his carefully balanced brushy constructions.

With the raw and perpetually agitating political climate raging this summer, Drysdale’s Hot Summer Deadly Day, through Sept. 2 at Barbara Davis Gallery, could use a lot more heat. There should be something wild, unpredictable, and a bit dangerous in an exhibition so monikered. Say, that of Camus’ heat-fueled murderous Meursault-whose victim became nothing but a “form shimmering before [his] eyes in the fiery air.” Maybe this is asking too much of a largely formal, painterly show, but Drysdale’s title just taps the so-called nail on the head a little too neatly to be ignored. The invocation of a “deadly day,” has a meaning at this moment too monstrously familiar to feel like it holds any weight applied to such frothy paintings.