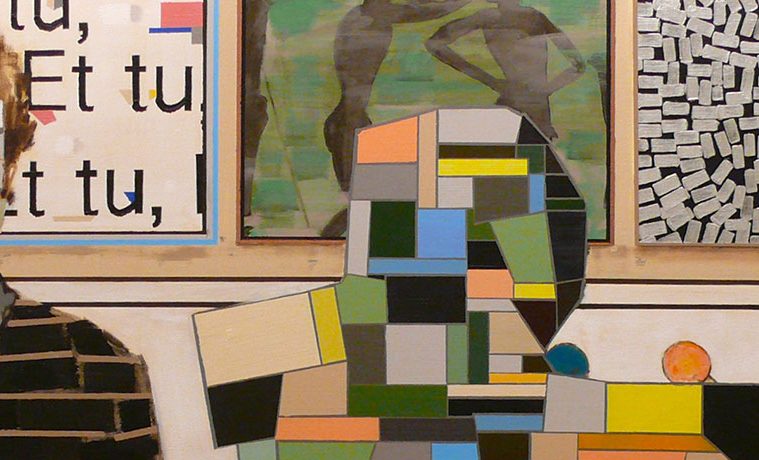 Content and Interpretation in the work of Matthew Bourbon 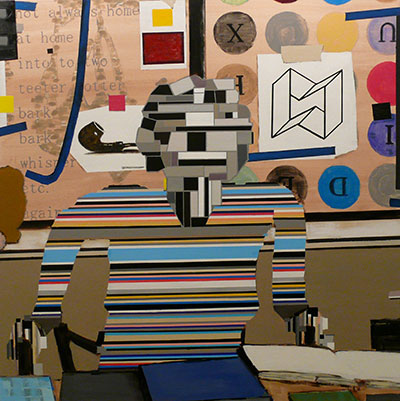 Matthew Bourbon’s latest exhibition of paintings, “Arch Deceivers,” on view at Avis Frank Gallery, immediately incurs a deluge of questions.  His characteristic use of geometric blocks and striations of color to depict figures is as captivating as ever and never belie the narrative.  The scenes hold the abstract and the representational components of the picture in a striking balance, but what are these people’s motives, their story? In Your Weakness is my Weakness, there is a man grabbing hold of another man’s arm in an act of intimacy, or is it a quiet anger? In Bad Actors, two men surreptitiously leaf through a binder- or are they benignly skimming the information?

To get to the bottom of the curious vignettes, the viewer could perhaps turn to the paintings within the paintings, usually a reliable purveyor of insight. Take Inscrutable Authors.  Foregrounded is a human form, the head a patchwork of black and grey squares, the arms and torso horizontal bars of blues and ochers with two pixelated globules for hands.  Painted in the background are enlarged typewriter keys and oversized pages of typewritten text, alongside tiny-pictures painted as though they are taped to the wall; a Magritte-esque pipe, Malevichian squares, a geometric black and white form twisted in on itself.  One could attempt to deepen these images into metaphors, try to get at what symbolism the artwork and text could be referencing, but that somehow feels like over-analyzing and stretching the visual evidence. 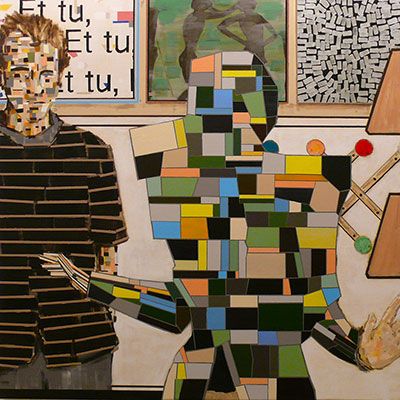 Much of Bourbon’s recent work includes imagery “collaged” into the background (Bourbon often considers the works as collages when painting them), but in actuality the collaged elements don’t illuminate much about the scene at all. They don’t serve as points of entry to understanding the work, but nor are they red herrings.  Bourbon knows that text in a painting will be read and interpreted, and image references will be tracked down – but to what end? It’s homage to, and disregard of, debates surrounding collage, and if the source material can ever exist independent of its content.

Despite the abundance and variety of visual elements throughout the work, Bourbon keeps the canvas compositionally uncluttered and tightly edited, the finely rendered backgrounds and pulsating energy of the abstract figures playing off each other perfectly.  In a work like Arch Deceivers, from which the show takes its title, the vertical bars of color that constitute the central figure seem as though they will glitch suddenly against the background, like an image flickering through the cathode ray tubes of an old television.  In fact, their similarity to color bars makes me wonder if the fragmented streaks and chunks of color here are coalescing into representational figure, or on the edge of dissipating completely, as fleeting as the moments Bourbon captures on canvas.