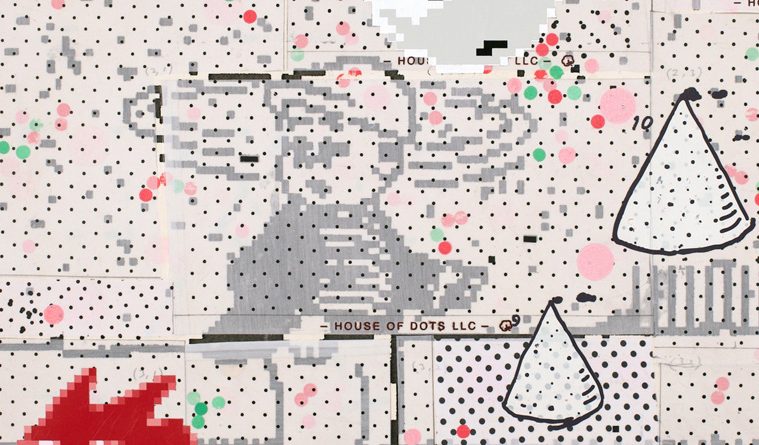 Cultural icons and digital landscapes: A conversation with Vernon Fisher 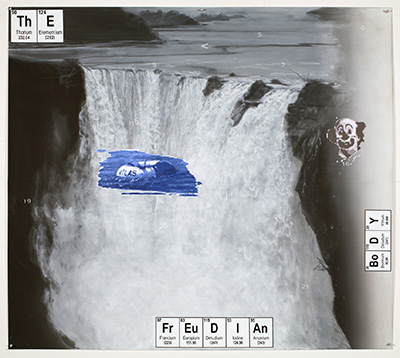 Vernon Fisher is an American artist living and working in Fort Worth,  Texas. Working with a wide variety of media, he is known for his juxtaposition of imagery and language. In the 1970s he broke away from abstract painting and began including words in his works, which evolved during the Pop Art era, and eventually drifted into the conceptual and uncontextualized realm. With influences such as Ed Ruscha and John Baldessari, Fisher initiated a new stage of heavily layered narrative paintings.

Fisher has had over 80 solo exhibitions around the world including the Whitney Biennial, the Contemporary Art Museum Houston, and the Modern Art Museum of Fort Worth, and his work is included in prestigious collections such as the Museum of Modern Art New York, Art Institute of Chicago, Hirshhorn Museum, and Guggenheim Museum. In Dallas, he shows at Talley Dunn Gallery.

His latest exhibition, Vernon Fisher Works on Paper at Hiram Butler Gallery in Houston, on view through June 30, features a series of tantalizing and visually-charged paintings on heavily treated paper. The works showcase his range of painterly styles, from highly rendered to flat billboard-style representations and abstractions. Operating with a subtle palette, Fisher allows only enough color cues to inspire the viewer’s engagement with his complex and gripping environments of pixelated cultural icons and digital landscapes. A + C writer Paul Middendorf visited with Fisher about his work, practice, and art life in Texas.

You have a complex philosophy around your work. Can you share with us some of the theories you use when making art?

Your normal experience of a painting is you see it as a whole first and then you see it in parts. My background is in literature and as a result the interaction is part to whole, not whole to part. You have to experience it in a linear fashion. Only at the end, and through reflection, do you get to see it. With my work, you are aware of the parts before you can construct the work visually as a whole. You are aware that the parts come from different modalities of representation. The text is part of a puzzle that you have to decode before you can read it as complete. Then there are vignettes that take the form of representation, and then there are the other elements that appear such as abstraction, representation, or other. You never get the experience where everything is seen as one piece; you get more of a partnership of elements. Chaos is at times more interesting in my works than harmony. The viewer gets to choose where to enter. 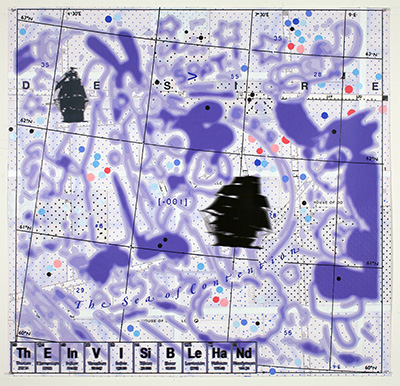 You have worked with numerous media such as sculpture, bookmaking, and installation to name a few. What keeps you grounded as a painter?

I like doing the installations and, at the time, they provided the opportunity to do large pieces in prestigious venues, but ultimately they all came to the same end: being painted over at the end of the exhibition, surviving only in documentation. That always left me feeling a little sad.

In addition, it is exhausting performing under the extreme time constraints of an onsite project. With paintings you can take your time, work with no plan, reflect on the work in progress, and they have a chance of finding an audience after you’re gone.

You made a decision to stay in Texas when your career began to grow. How would you say Texas has played a role in your body of work differently than if you had moved to the East or West Coast? How have you pulled your influences from the region?

Growing up in rural Texas probably informed my interest in a certain kind of landscape: vast, uncompromising, verging on bleak. Other than that, Texas has been mostly a place to overcome.

Technology has worked its way into the art world today and is seen in your new body of work. How are you working with technology in relation to your previous philosophy?

Essentially the vignettes, which were hand-painted in the earlier work, have been replaced by digital images produced with a computer program and vinyl cutter. I like being able to control how “degraded” the image gets. It’s a way to infuse the image with static or noise. Think of it as a digital version of a clogged silkscreen. Your question does bring to mind the notion of tradition, and what it means to work within a specific tradition. Paintings don’t march out on stage alone. They are accompanied by all the paintings that have come before, complete with a constellation of expectations about what a painting can or should be. To look at a painting without an awareness of this is like playing tennis without a net. Might still be fun at some childlike level, but to what end? 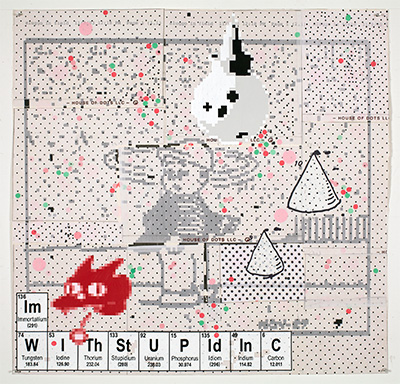 What is the importance and value of text to you?

With my older works which included large sanded letters within the paintings, you would get people who insisted the text was truer than the paintings. It was interesting what the viewers chose to prioritize. I suppose in our society text does have more of an authority.  However, now we battle within words, with things you read being shavings of the truth. This happens on almost an hourly basis with Twitter feeds and other social media.

How does this relate to your use of punctuation?

The importance of punctuation—what it does and how it acts—is much like that of a traffic signal or tool of guidance. A period would be a stop sign, a comma would act as a yield or momentary pause, the parenthesis is that of an explanation or an exception, like that of an actor on stage looking at the audience and breaking the fourth plane. I would do a painting of a representational image and it would seem full and finished, but then I would add a sculptural three-dimensional comma. This made the painting appear unfinished because now it is representing something that is not there—you immediately turn towards whatever is to the right of that comma. I really enjoyed that because for a moment you have a state of resolution. You see this is how my mind works. One thing leads to another and creates a string of events. It’s how I figure out for myself what is good. It’s like that of a ʼ70s movie ending, like in Five Easy Pieces Jack Nicholson just walks away and leaves poor Karen Black just standing there in that parking lot. It comes back to that attraction of the unresolved.