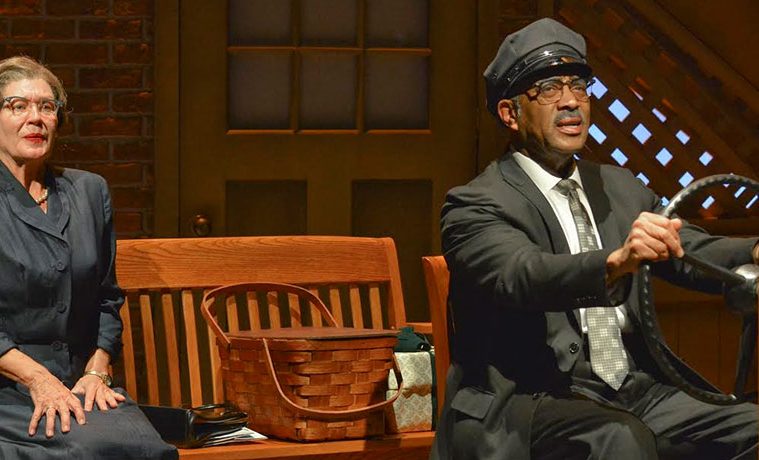 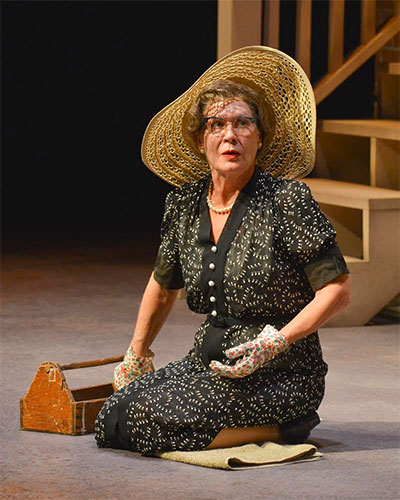 Life has gotten quieter over at Dallas Theater Center. After a rowdy and bawdy production of The Rocky Horror Show to kick-off it’s current season in September, DTC swings the pendulum in the opposite direction, with the genteel staging of Driving Miss Daisy, through Nov. 16.

The script, a moving story of friendship that unfolds in vignettes, is told with humor, warmth and beauty as it gently raises questions about serious issues—aging, bigotry and Civil Rights. The place is the Deep South, the time 1948, just prior to the civil rights movement. Having recently demolished another car, Daisy Wertham, a rich, sharp-tongued Jewish widow of seventy-two, is informed by her son, Boolie, that henceforth she must rely on the services of a chauffeur. The person he hires for the job is a thoughtful, unemployed black man, Hoke, whom Miss Daisy immediately regards with disdain and who, in turn, is not impressed with his employer’s patronizing tone and, he believes, her latent prejudice. But, in a series of absorbing scenes spanning twenty-five years, the two, despite their mutual differences, grow ever closer to, and more dependent on, each other, until, eventually, they become almost a couple. Slowly and steadily the dignified, good-natured Hoke breaks down the stern defenses of the ornery old lady, as she teaches him to read and write and, in a gesture of good will and shared concern, invites him to join her at a banquet in honor of Martin Luther King, Jr. The final scene has Hoke visiting a now 97-year-old Daisy in her retirement home. This is possibly the last time they will see each other.

There’s a deep sense of character and intimacy in Alfred Uhry’s Pulitzer Prize-winning play, which was inspired by the playwright’s own grandmother and her chauffeur. Driving Miss Daisy (1987) is the first in what is known as his “Atlanta Trilogy” of plays, all set during the first half of the 20th century. Originally produced off-Broadway at Playwrights Horizons, the play earned him the Pulitzer Prize for Drama. He adapted it into the screenplay for a 1989 film starring Jessica Tandy and Morgan Freeman, and was awarded the Academy Award for it. Tandy also earned an Oscar for her role. 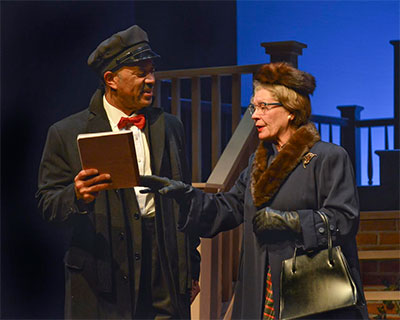 Under the wrong intentions, the plot could easily sink to the maudlin. But DTC director Joel Ferrell pulls it off with a sensitive hand and some first-rate actors. As Daisy, Annalee Jefferies gives a resourceful performance—not a glance, nod or hand gesture is wasted as she breathes life and love into the character. There’s potential for plenty of humor in the blunt comments of the irascible Southern widow, but Jefferies stays clear of caricature, giving us a steely performance blessed by grace and dignity. Equally realistic, Hassan El-Amin shines as Hoke, keeping his rage just under the surface, and his heart fully exposed. As son Boolie, James Crawford comes across as a happy fellow just trying to make his mother comfortable in her declining years. Crawford plays up the “happy” a tad much, but we get the sense that he does care deeply for his bossy Mom.

Nice production touches in costuming and especially set design, a rotating stage that foreshadows the passing of time as it swings clockwise to show the living quarters and then the outside. A simple wood bench and chair stand-in for Miss Daisy’s car, all you need really, when the show is powered by heartfelt performances. At a thrifty running time of 85 minutes, this is a smooth ride from start to finish.