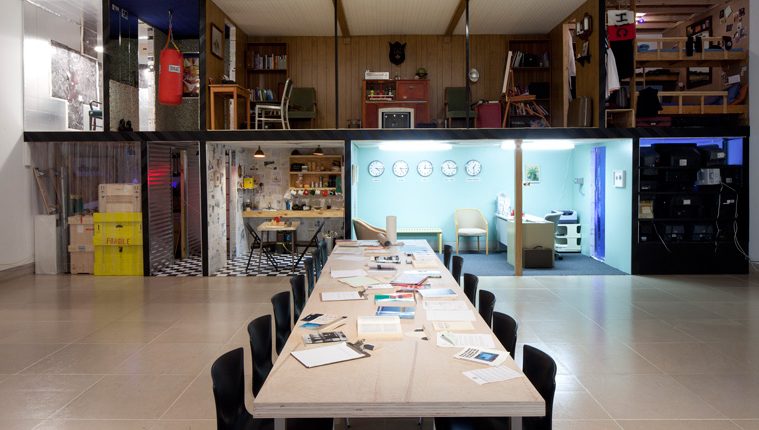 One of many possible origin narratives of DallasSITES: Available Space begins with curatorial research. For the past couple of years Leigh Arnold, the Dallas Museum of Art’s research project coordinator, has been acquiring ephemera and select art objects documenting the contemporary art scene in North Texas over the last 50 years. It’s an ambitious undertaking to collect and archive the critical moments and movements of contemporary art in the region over such a long stretch of time, but the arts community is clearly well served by the preservation of its own history. We often get so excited about what’s happening next that we neglect our own historical context.

This ongoing project makes it much easier for local artists, cultural practitioners and arts patrons to acquaint themselves with the area’s contemporary art past. To see the initial fruits of this labor and the ovum for Available Space, go see Arnold and Gabriel Ritter’s co-curated exhibition DallasSITES: Charting Contemporary Art, 1963 to Present, on view through September 15 at the DMA.

Now, what’s intriguing here is that the DMA took the archiving of the area’s contemporary art scene a step further, by curating an exhibition of local contemporary artists. Chalk it up to good timing and an institution seeking to increase its participation with the local arts community (though some may wonder why it’s taken so long). The DMA found itself with some time on the calendar in which no exhibitions were scheduled for the Barrel Vault and its surrounding galleries— just a couple of months between Cindy Sherman and Jim Hodges. Lacking enough time to put together a “proper” exhibition, they decided to experiment, which is no easy task for any large institution, whatever its make or model. Reenter Ritter, the museum’s assistant curator of contemporary art, and the possibility of contributing and responding to the historically-oriented show just down the hall (Charting Contemporary Art), and DallasSITES: Available Space was born.

Available Space brings together some the area’s finest artists, art organizations and collectives under the DMA’s roof: HOMECOMING! Committee, The Art Foundation, Dallas VideoFest, Performance SW (PSW), Oil and Cotton, as well as Brookhaven College and the museum’s own C3 Center for Creative Connections. Between the quality of the installations and the performances and the interactive programming and learning, this exhibition justifies the museum’s decision to let its guard down a little and do something out of its comfort zone.

I knew Ritter had done something right as soon as I entered the space and saw The Art Foundation’s installation, Boom Town, including Brandon Kennedy’s NFS, in which he’s taken his father in law’s gorgeous 1973 Jaguar XJ6 and filled the interior with large stacks of rare first editions of theoretical texts, most of which seem to be on art and economics. It’s a simple and effective visual commentary on art and patronage, and the museum setting helpfully nudges it into gentle satire.

Also there you’ll find Margaret Meehan’s The Circled Square, an old-fashioned boxing circle drawn on the ground encircling a pair of aluminum boxing gloves, which rest upon a black glitter mat. Like most of her work it’s a strangely subtle merging of images and intimations evoking meditations on violence and gender, elegance and brutality. Whatever The Art Foundation (a Dallas collective focused on furthering artistic dialogue) is up to, it almost feels like cheating — and good for them, and good for Dallas. The Dallas VideoFest installation in the Rachofsky Gallery is an equally fine compilation of work by dozens of area artists, including Michael A. Morris, Carolyn Sorter and Morehshin Allahyari.

Available Space’s most noteworthy offering comes from HOMECOMING! Committee. The Fort Worth-based collective’s interactive performance installation, Post Communiqué, turns the Hanley Gallery into a two-story multi-room underground station, replete with references and nods. There’s a multi-monitor video room for psychological deprogramming (I assume), a bunk-bedded barracks, an office with clocks displaying the time in certain major cities around the world, a chess game in progress, a punching bag to keep in shape — and it all looks good. They paid attention to the details.

Elsewhere in the space, the fairly new collective inserts itself into art movements of the past several decades with fictitiously dated artworks and ephemera, making it appear as though HOMECOMING! has been around for the last 50 years (another smart nod to Charting Contemporary Art).

My only doubt, however, rests with these outlying works. While they’re perfectly competent and effective works on their own, the space would’ve been better served had HOMECOMING! members given themselves completely over to the bizarre station house, their operational nerve center. I felt a bit distracted by the surrounding work, when I wanted to be immersed in the fantasy their underground revolutionary habitation elicits. Then again, perhaps time or intention prohibited the scale I would’ve preferred. Nevertheless, here’s hoping Available Space signals the beginning of a new direction for the DMA and its relationship with local artists.