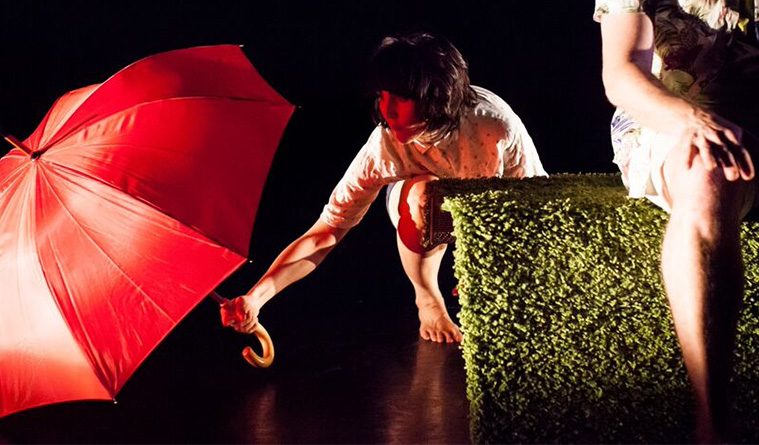 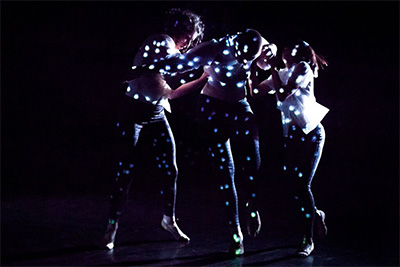 The Barnstorm Dance Festival washed over downtown Houston for three weekends, May 28 – June 13, kicking off the sultry summer for dance fans.

For its inaugural performances at The Barn, presented by Dance Source Houston, dancers and choreographers from in and around Texas were invited to share their unique voices over the course of three summer weekends. Torrential downpours aside, the turn-out for this festival was reassuringly high.

Dance in Texas is not about one style or choreographer or company; it’s about the constant movement of everything and anything in between, graciously generated by a community of devoted dance champions. And, the Barnstorm  showcased that exact assortment.

She, Extracted, choreographed by Curtis Uhlemann and Erica Gionfriddo, from Austin’s ARCOS Dance, proved the highlight of Program 1. The outstanding dancers—Alexa  Capereda, Erica Gionfriddo, and Felicia McBride—weaved in and out of inventive conjoined poses and shared balances, along with a brave mix of daring partnering. Eliot Gray Fisher’s media design created a scintillating and moody lighting storm to match the dancers’ sinewy qualities. 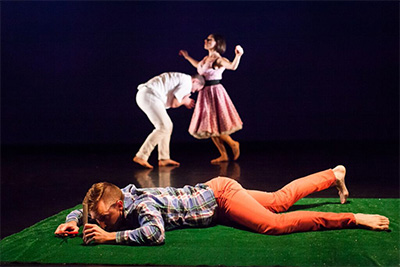 Other dances of merit from Program 1 included the menage-a-troiswit of Cosmic Sword, by Dallas’ Dark Circles Contemporary Dance, choreographed by rising star Joshua L. Peugh, with its clever neo-jazz funk flow, high flung comedy, and sensual charm. And later in Program 1, the warm welcome of classical Indian dance hit the stage with Houston’s own Nritya Dance Company performing Liberation, a festive dance-drama about the journey of human emotions. DSH artist-in-residence Alisa Mittin’s delicate reality monitoring, an episodic narrative duet with Jhon Stronks, added the evening’s whimsical element, as they performed with an intimate composure, while occasionally whispering in French.

The Barnstorm Dance Festival continued into the weekend of June 4- 6 with Program 2. The edge of it invoked a meditative mood, with its fluid choreography and indirect persona, as creator and dancer Andee Scott boldly skidded across her fizzling black and white video projections. Like She, Extracted from Program 1, the edge of it explored the current fundamental relationship between dance and technology in an open visual arena. Throughout the dance, Scott interacted with the density and fluidity of light, moving in between the pulsing projections across the stage’s diagonal with daunting head-first throws and body crawls. This abstract solo left ample room for our imaginations to roam for the diverse meanings behind Scott’s brisk duet with light. 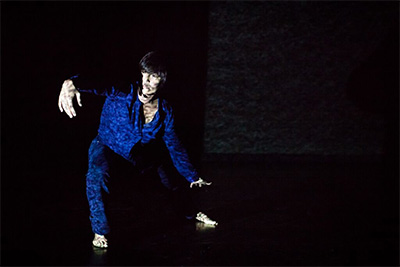 Andee Scott in the edge of it.
Photo by Lynn Lane.

Dionne Sparkman Noble‘s Where the pulse lies relayeda heartbreaking personal story about Noble’s grandmother’s battle with Alzheimer’s. Rachael Hutto, portraying the grandmother, courageously recalled childhood memories, only to lose them as she danced on. Dressed in a floor-length blush pink Victorian dress, Hutto’s clear voice and sharp lines held the audience in a trance from the start. From fearless turns to simple walks, Hutto commanded the stage through to the very end as she arduously moved from one chair to the next, while we contemplated her somber story.

Program 2 also included dances of immense promise with the soothing group performance of Becky Valls‘ Drift and the spunk of the all-male FLY Dance Company‘s 3 piece. Abby Flowers and DSH Artist In-Residence, Lori Yuill, took full command of the stage with their crisp clarity in Yuill’s smart In the Upper 30’s. 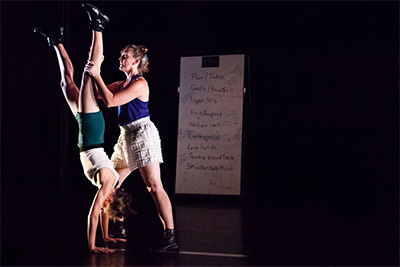 Program 3, June 11-13, proved equally ambitious. Sonkiss‘d Dance Theater‘s elaborate choreography, but simple design, in Moving Mountains thrilled  with its harmonious moments. Audiences held their breath while Sonkiss’d founders, Christopher (YungChris) Thomas and Corey Greene, folded and unfolded from poses and constructed an origami-type flow of movements. These two phenomenally skilled Sonkiss’d dancers explored shapes and balances with two creaking wooden crates on stage. And their shape creation carried over to their independent movements as Thomas and Greene swiveled their hips and flipped across the stage with a balanced dignity and grace. 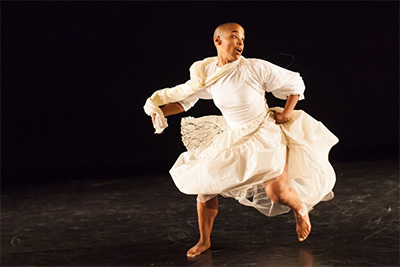 Jasmine Hearn in mama, am I clean yet?
Photo by Lynn Lane.

Jasmine Hearn‘s mama, am I clean yet? took us on a personal journey, which demanded intense physical and mental awareness. Hearn created a highly theatrical performance, flinging herself into jittery movements and singing in a shaken, raspy voice.  Mama, am I clean yet? tested audiences with its cacophonous feast of raw emotions. With Program 3 especially, the choreographers seemed more focused on directly communicating with the public. From the reflective, plucky nature of Flower II: Marigold by Texas A&M Dance/Jane Weiner. to the touching swoops and swoons of the poignant partnering in Catalina Alexandra’s Alchemical Yes, audiences experienced an expressive banquet of dance voices.

These three weekends of dance were all together thrilling, ambitious, and flooded with emotion. After some recent losses in the Houston dance community, it’s a welcome sight to have eclectic dance performances back in town. Hopefully, with the help audiences and artists, Barnstorm will become a yearly festival.