Dialogues Between Art and Music/Soundings: New Music at the Nasher 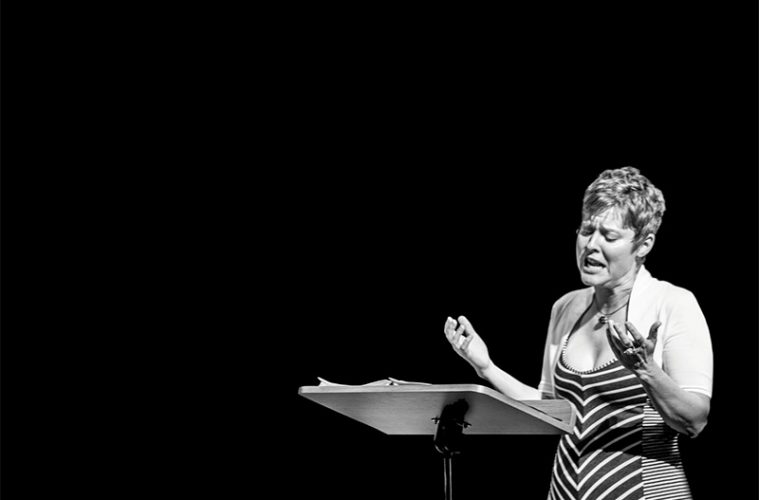 Tony Arnold performs in Some Favored Nook, based on the long-running correspondence between poet Emily Dickinson and abolitionist Thomas Wentworth Higginson, as part of Soundings: New Music< at the Nasher, Jan. 4. Photo courtesy of the artist.

Listen to music in a roomful of visual art, and your eyes and ears may pick up parallels thanks to sheer serendipity. The resonances don’t necessarily depend on someone planning them out.

“The collection at the Nasher Sculpture Center, and the way it’s exhibited, always has a wonderful dialogue between art of different eras. This is what I find profoundly moving. And it’s also deeply helpful in giving people an emotional access to music,” says Seth Knopp, artistic director of Soundings: New Music at the Nasher. Audiences pick up affinities on their own, so he sees no need to contrive programs that have hard-and-fast links to the sculptures on display.

“Similarities between artistic voices … really give people a different and deeper perspective on the Nasher’s collection, and on what’s presented in a single (concert)–or what’s presented over the course of a season,”

Knopp says. “That gives me freedom.”

When he isn’t teaching piano and chamber music at Baltimore’s venerable Peabody Institute, Knopp serves as artistic director of Yellow Barn, a chamber-music center in Vermont. Yellow Barn and the Nasher have no official link, but Knopp’s double duty means they can cross-fertilize nevertheless. 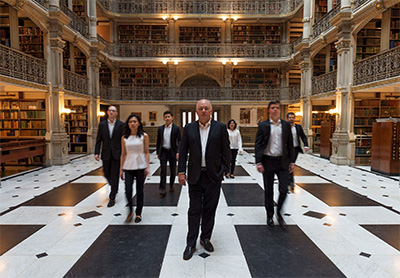 Percussion Collective performs in Rituals of War and Death, as part of Soundings: New Music at the Nasher, March 1, at the Nasher. Photo courtesy of the artist.

“It tells a story that’s really not well-known,” Knopp says. Higginson, in his role as a late-1800s literary figure, encouraged the then-unknown poet to pursue her calling. After Dickinson’s death, he co-edited the first collection of her poetry.

Using a text drawn from their letters and other writings, Nathan’s cycle casts a soprano as Dickinson and a baritone as Higginson. The two share their views about topics ranging from war and human rights to love and death.

Nathan “writes music from a quiet but very passionate place,” Knopp explains. Thanks to the existential topics Some Favored Nook  explores, it “resonates in such large ways. Yet it’s also so intimate and personal. … It very quietly seeps in. When it was premiered–in a house concert at Yellow Barn–people were weeping at the end.”

Nathan’s songs will share the program with two other vocal works rooted in the Civil War’s upheavals. Four Walt Whitman Songs by Kurt Weill, the German-American best known for his The Threepenny Opera, includes a setting of O Captain! My Captain!  Whitman’s When Lilacs Last in the Dooryard Bloom’d is the basis of Apparition by George Crumb, a pioneer of coaxing new and subtle tone colors from instruments.

“In many ways, there’s a real aesthetic link between (Nathan’s) music and George Crumb’s music, just in the fact that there’s very little histrionics in either one’s approach to their writing,” Knopp says. “But there’s an incredible emotional undertone to what they do.” 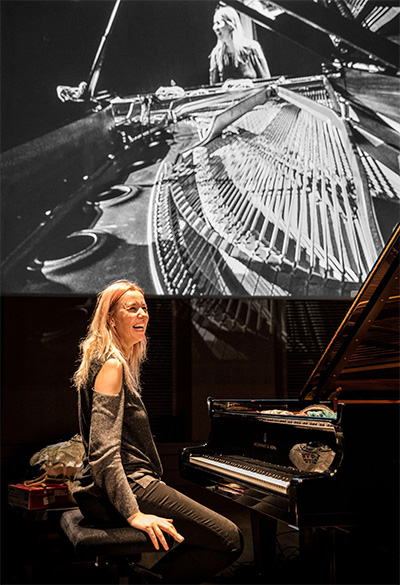 South African-born pianist Kathleen Tagg performs at Breath & Hammer as part of Soundings: New Music at the Nasher, May 11. Photo courtesy of the artist.

The life-and-death urgency will return in Soundings’ March 1 program, thanks to two works for percussion ensemble. Caprichos Enfaticos by Martin Bresnick, a faculty member at the Yale School of Music, harkens back to Francisco Goya’s The Disasters of War. It even includes video of Goya’s etchings. In Village Burial with Fire, British composer James Wood evokes the Hindu ritual for purifying the soul of the deceased.

“You’ll have a stage set up with percussion instruments–and they’ll be surrounding the audience, as well,” Knopp says. But “the language of the two composers could not be more different.”

Bresnick’s Caprichos Enfaticos has a relatively modest sonic range, perhaps befitting a score that shares the audience’s attention with Goya’s images, Knopp says. Wood’s palette is “more vast. … It takes you on a different kind of journey.”

Soundings’ season finale, May 11, will bridge musical styles and cultures. Pianist Kathleen Tagg and clarinetist David Krakauer will come to the Nasher with Breath & Hammer, a multimedia program that melds classical, jazz, klezmer and world music.

Tagg and Krakauer expand their instruments’ sonic spectrums through innovative playing techniques–such as Tagg’s using a violin bow to draw sound from the piano strings–and electronics. Starting with what they call “simple songs” from around the world, Knopp says, the duo uses improvisation as they create their own original compositions.

“They describe it as a hybrid art form that bridges cultures from the past and new work,” Knopp says. “David is kind of a force of nature. He’s also very politically involved. I think his form of protest is to gather cultures and unify them. This program is certainly an outgrowth of that impulse, which he and Kathleen share. … People will feel what’s going on, and I think find great empathy for what they’re doing.”