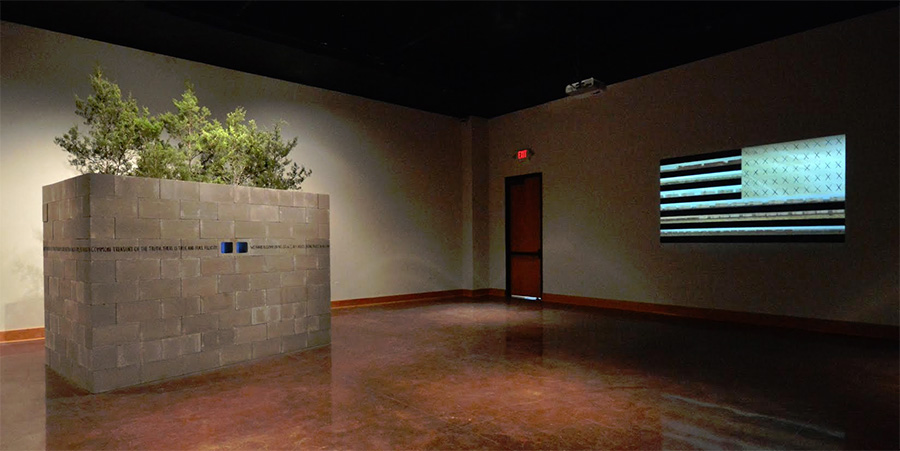 Daniel and Billi-London Gray at Gallery 2

For the last several years, collaborative married couple Daniel Gray and Billi London-Gray, a nomadic pair of artists, have called San Marcos home despite a schedule peppered with stints in artists’ residencies around the United States. For their latest venture the couple was invited to live and work in the Petrified Forest National Park and the result of their time there is the subject of Displacement, on view through July 26 at Gallery 2 in San Marcos. 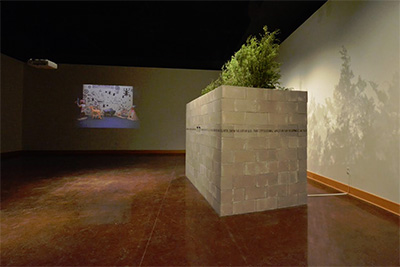 The exhibition is a sparse yet well-considered arrangement of three pieces, each featuring the use of video: A narrative short film titled “Toying With History”, a structural installation called ”The City of God”, and a wall-piece “Our Rapid Multiplication” which features a unique American flag striped with videos of flood waters and racing freight trains. All the work is troubling at first in its cynical and apocalyptic undertones and the exhibition really reads as one large installation instead of three distinct pieces making it difficult to differentiate the experience of each one. As the short film “Toying With History” whines a gloomy and disconcerting song, the backwards American flag of charcoal-drawn black stripes and aggressive X’s (instead of stars) silently reflects back on the opposite wall. Lastly, in “City of God” the overly raw bunker of cinder blocks with ash Junipers jutting out of the top and encircled with hand-scrawled black text is stuck right in the middle of the gallery between the other  works to act as a physical object that marries the dark and light sides of manifest destiny.

“The City of God” installation also includes a poem created from the individual words of a historical monument on the ground of the park, though the placard probably reads something heroic and conclusive, the constructed poem is dark and elusive. The esoteric use of text in these pieces seems to further push the obscurity of the artist’s actual thoughts on the show’s theme. 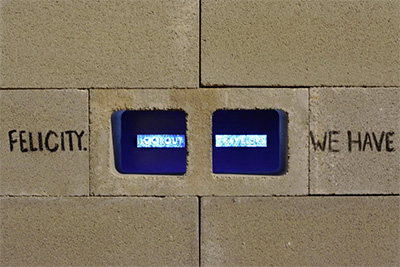 Their intention is not immediately clear, though the title—Displacement, hints at something on the hearts of many this year, especially in South Texas. People being driven out, whether passively or by force, others making the decision to leave a place to accommodate another group of people moving in. I think the Grays are genuinely and actively asking, with few preconceived judgments, is this a good thing? A bad thing? Simply too complex to qualify?

Being an American of any kind carries baggage in the form of the knowledge that whatever you enjoy you enjoy thanks to a systematic and widespread displacement of many people who previously staked claim to this land. For many generations, land has changed hands from the indigenous to the explorers, from pilgrims to governments, to even more governments and so on, forever and ever. Being surrounded by the artificially created boundaries of a pristine national park surely evoked the looming question, who was displaced and why? The obvious answer in the southwest is, of course, the native peoples of the southwest, and the Grays smartly point out the fabrication of the idea of the “noble savage” through the visual culture of the new American southwest in their video work. 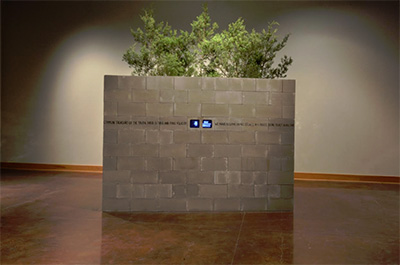 The show has an oppressive sense of doom—raw physical materials combine with stark video to cover the work with a shroud of gloom. The slogan of the United States National Park service is “Come discover your America!” and it’s clear the Grays took the sentiment to heart, though in discovery— like all things—the more you think you know about something, the less you know. Perhaps the discoveryis in the Gray’s ability to peak behind the (very public) curtain of America’s richly nationalistic pride and see behind it, the undecorated, confusing truth of it all.

Displacement will be on view at Gallery 2 in San Marcos at the Joan Cole Mitte School of Art and Design through July 26th. Gallery hours are Monday-Sunday  9AM – 10PM.