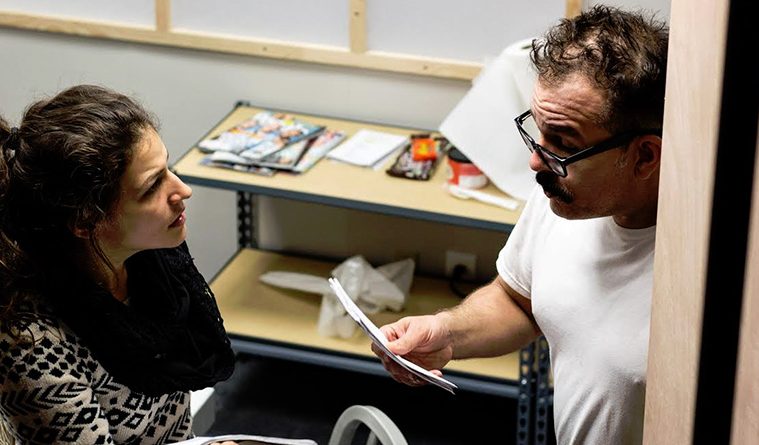 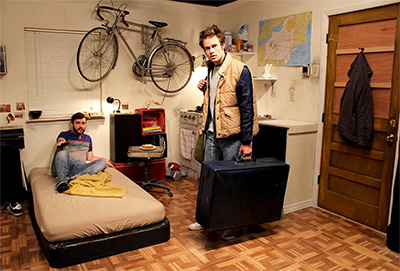 Mark Ivy and Matt Hune in This is Our Youth as part of the Hune Company’s Living Room Series. Photo by Alex Schwenke.

Matt Hune launched the Hune Company in his living room during Houston’s sweltering summer months with Not Mad, a Shakespeare mash-up, then followed up with This is Our Youth. The Hune Company presents the third show in the 2015 Living Room Series, David Harrower’s Blackbird, Nov. 25- Dec. 12,, with Hune directing a cast that includes Greg Dean and Valentina Olarte. A + C editor in chief Nancy Wozny visited with Hune about his cozy theater and his reasons for creating the Living Room Series.

The theater is really set up in your living room?

Yes, it is my actual living room. I tell people that it is not theater in my living room, but my living room turned into a theater. There is a big difference I think. I admit, it’s an odd thing to construct and perform theater in my house, but at the risk of sounding horribly cliché, I’m the type of person who tends to make my work encompass my life, so it has been sort of fitting.

What drove you to set up a living room theater?

The idea first sprung out of a practical need for cheap space. The more I thought about it, the more the living room seemed like an interesting option. Historically, living rooms have been places where we gather and share stories. Sometimes, those stories are in person with family, and sometimes, we watch stories by ourselves on TV (or Netflix now). 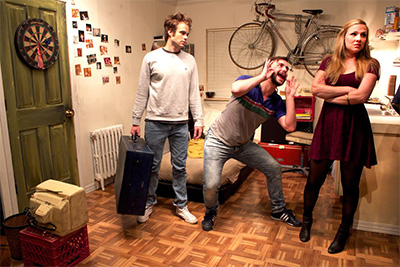 Matt Hune, Mark Ivy and Julie Krohn in This is Our Youth as part of the Hune Company’s Living Room Series. Photo by Alex Schwenke.

I felt as if I was in that decrepit apartment in This is Our Youth. Talk about intimacy.

I believe that we are at a time when many theater professionals are questioning the role of theater. We can literally watch whatever we want whenever we want in the comfort of home at a considerably cheap price. Theater needs to offer more than just a good show. I think audiences crave more of an experience when they go out. That is what I am trying to offer. The audience is close. They are offered free drinks. With only 20 people seeing each show, it encourages people to talk to each other before and after the performance. I hope that when someone comes to see a show in the Living Room Series, that person feels part of the action of the play and part of the experience as a whole so that she or he is invested.

My goal is to produce holistic theater. The Living Room Series is an experiment in moving toward that goal. Eventually, I will move this work out of my living room, but where ever the next space will be, it must be intimate, and it must keep the same feel as the living room.

Are there any challenges living in a house with a theater?

It is a challenge to basically live on the set in my real life. After the performances and during the days off, I can’t just go home and decompress. I have to literally leave the house if I need a break from the the play. Also, I do have to say that my wife is a saint.  She is a fantastic artist and printmaker in her own right, but has also become my producing partner, taking on many of the responsibilities of running a theater company out of our home. 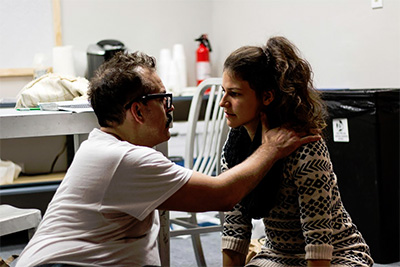 What are some of the perks of the process?

Producing this series in my living room has also allowed me to spend more money on the actual product. It makes me cringe when I think about how much money some companies have to spend on space rental, which can be  60-80 percent of the budget. Theater is expensive enough to produce. It takes a lot people. And I believe those people should be paid for their work. Sets, props, costumes, and marketing cost money. Everything adds up. I passionately believe that there needs to be more affordable space options for theater companies. When space is cheap, the product gets better. Most all of my budget goes to artists and materials for the actual plays. It’s been wonderful.

Do you have to scale down production wise?

Each production in this series is fully realized, meaning that there are fully constructed sets, lights, costumes, and props.

What kinds of plays work best there?

The best shows that fit in the living room are obviously shows with small casts with  typically one setting. Each show that I have chosen in this series deals with inheritance and generational clashes. What we get passed down from generations before us and what we pass down to generations below. Living rooms are places where we are raised and where we raise our children. I thought the theme fitting. Since the audience is so close, there is also no hiding any short-cuts in the work. Every show has to be meticulously worked.

Do you need to dial down the acting a bit because you are so close to the audience?

The acting has to be tangibly real. Anything fake rings out horribly to the audience.

Tell us about Blackbird, what’s it about and what exactly makes it a good living room play?

Blackbird is an Olivier award-winning play by David Harrower that gives me chills every time I read it, or see it in rehearsal. It’s a two-person play that centers around Una and Ray, 15 years after they had an affair together when he was 40 and she was 12. Now an adult, Una confronts her abuser at his work after he has served his prison sentence. This is the first time they have seen each other in 15 years. Without any moral judgments, the two characters attempt to examine their experience by reconstructing, releasing, and reclaiming their identities. It’s a play about truth, deconstruction, redemption, and restoration. We are lucky to be producing it now just before its Broadway premiere with Jeff Daniels and Michelle Williams. It’s also in the process of being made into a film. Our living room makes the play so potent, uncomfortable, and mesmerizing. The actors (Greg Dean and Valentina Olarte) are doing fantastic work as well. I can’t wait for people to see it.

How has the audience responded so far?

We have had to extend every production so far. I am so grateful. It just confirms to me that people are really craving more out of a theater experience. I am super excited and thrilled and honored by all the amazing people that are working on these projects and all of the audiences supporting the process.