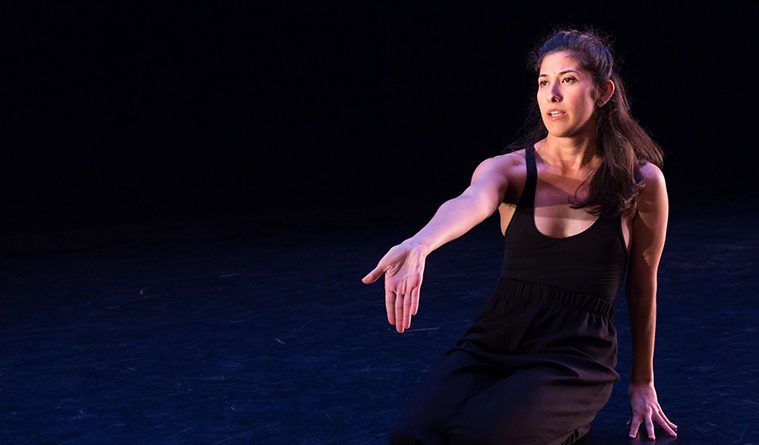 DSH’s Mind the Gap Mines the Personal and the Political

Laura Gutierrez in Expose as part of Dance Source Houston’s Mind the Gap, Jan. 18, 2017 at the MATCH.
Photos by Lynn Lane. 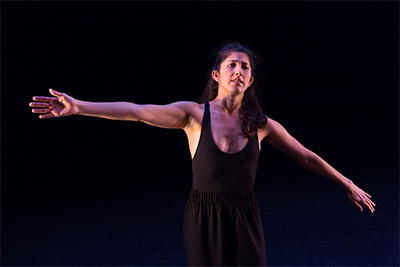 When I saw that Dance Source Houston cooked up a follow-up project for their AIR residency artists I had to go, mostly because it’s just such a smart move.   DSH is so good at seeing what the dance community needs and doing just that. Planning and action is their M.O. These artists needed a next step to continue their development and DSH dreamed one up, cleverly called Mind the Gap.

There’s a lot going on in this gap though, so much so that the evening felt like a mirror of my present state of anxiety, hope and grief, and in that exact order.

The evening burst out of the gate with Laura Gutierrez’s explosive Expose, a running, dancing, yelling, cussing stream of consciousness verbal tirade and motion covering gun violence, sexual predator behavior, bad dates, anger and the sorry state of the nation.  And, all in one seamless sentence of action.

Gutierrez does not hold back, as the piece works like a valve that has finally been released, growing in momentum and energy as it progresses. Word and action become one with a brutal force and determination. No edges are softened here. I imagine that it was empowering for her to perform and it was surely a powerful piece to watch. I felt more like a witness than a watcher at times. 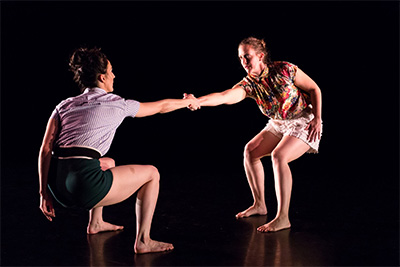 Alisa Mittin and Lori Yuill in their collaboration I’m so Proud of You.

The urgency was palpable.

Sometimes you just have to get something out of your system and dance is the best way to do it. Her very last motion and statement alludes to that fact that we will all be OK. It’s both a statement and a question, and therein lies the terror. About 24 hours later, former President Obama uttered the exact same words.

Alisa Mittin and Lori Yuill’s collaboration I’m so proud of you took a more gentle approach, using charm and mystery to entice the viewer. Mind you this performance took place just days before the women’s march, where almost an entire gender showed up to protest Trumpism. Mittin and Yuill have a mischievous flair, occasionally addressing each other with such remarks as, “Are you OK?, “that’s not it,” and “I’m so proud of you.”

Their movement is quirky and deliciously fun; both are such appealing movers that we just want to follow them along. It isn’t until the end where I see a reference that I can fully understand, that of the Statue of Liberty. The lights go down as they trade off dressing each other up as the great lady who welcomes immigrants on their journey to the US. There is something cunning and honest about this dance that gives me hope. Do we have to become our own statues of liberty? I don’t know. It’s a playful dance, and cheekily feminine. 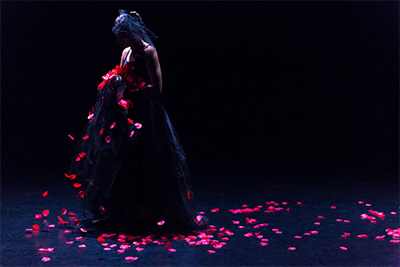 Amy Elizabeth’s Desquamation, performedby the always elegant Danielle Garza, is a ritual of mourning. The title refers to the shedding of the outermost membrane or layer of a tissue, such as the skin. Garza enters in a giant black tulle gown carrying rose pedals, which, as they fall, become a red streak across the stage. Gradually she sheds her gown as she nests deeper into the ground. Elizabeth’s elegiac dirge felt about right for the mood of now.

My guess is that these four choreographers did not set about to make a political statement. That is coming from me, and I take full responsibility for my interpretation. Maybe everything I see now is going to come through the eyes of our new world order.

On a light note, the evening proved a great reminder that dance in Houston is just gonna keep on keeping on. The arts are like that.