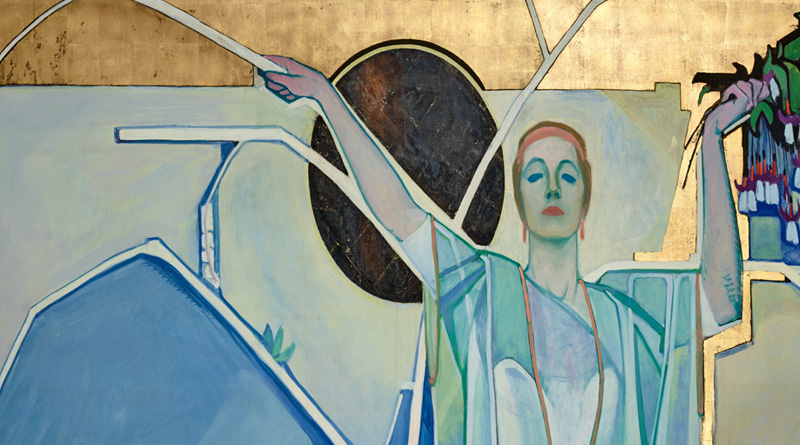 In 1913, Agnes Ernst Meyer, the wife of financier Eugene Meyer, Jr., and pregnant with her second child, was out of sorts and unable to make her rounds to the art galleries, where, as a former New York Post reporter on the art beat, she had been dubbed “the Sun Girl” by photographer-gallerists Alfred Stieglitz and Edward Steichen. Writing to Stieglitz, a brooding Meyer quipped, “I am now your Eclipsed Sun-girl.”

Reading that passage last summer, Sue Canterbury, American art curator at the Dallas Museum of Art, says she “flew up and smacked my hands down on the desk,” then ran to the DMA’s painting conservation studio, where a suite of murals the Meyers commissioned Steichen to paint for the foyer of their Park Avenue townhouse were being prepared to be exhibited together for the first time in more than 100 years. They’d spent much of the past century rolled up in storage, and the panel Canterbury wanted to examine “was still flat down on its face being pressed out with weights on top of it to make it relax,” she says. “But I told the conservators, ‘I’ve got to see this one. I’ve got to see the top of it.’”

Conservators cleared away the weights and lifted the top part of the canvas, so Canterbury could study a mysterious dark orb, which appeared next to Agnes Meyer’s head and which was one of the few coded symbols in the seven canvases whose significance had so far eluded Canterbury. “There was a fine yellow ring of light emitting out from the edges of the dark orb, so I thought, it is an eclipse,” Canterbury says. “But looking at the orb, I could tell there was metal leaf underneath the darkness, so was that gold leaf? And why was it dark? Did he paint over it?”

The mystery was solved a few weeks later, after the murals had already gone on view, when samples came back from the lab revealing that while Steichen had used gold leaf extensively throughout the murals, for the orb he used silver leaf, which he knew would tarnish, to create his “Sun Girl’s” eclipse.

The dark-orb enigma is just one of the discoveries unearthed in the exhibition Edward Steichen: In Exaltation of Flowers, on view through May 13 at the DMA. For many viewers, another will be that Steichen, a seminal figure in the development of 20th century photography, also painted—let alone that he ever painted in the Symbolist-Art Nouveau hybrid characterizing the Meyer commission, with its clearly delineated figures and a dazzling interplay between the matte tempera and glittering gold leaf enlivening its surfaces.

“It is really unusual, because most of his work as a painter was more in the tonalist style,” Canterbury says. “In the late 1890s and early aughts, his paintings really paralleled his Pictorialist photography style that he did until the Photo Secession—very soft-focus; very moody—his paintings looked the same way, only with color. But murals do serve a different purpose from a photograph or an easel picture. They’re telling a story, so you want things to be fairly readable from a distance.”

These wall murals tell the story of the Meyers’ and Steichen’s rarefied circle of friends, depicting, in addition to Agnes Meyer and her daughter Florence, the mezzo soprano and dancer Mercedes de Cordoba, the artists Katharine Rhoades and Marion Beckett, and the dancer Isadora Duncan, along with their floral counterparts, inspired in part by the Symbolist writer Maurice Maeterlinck’s 1907 book The Intelligence of Flowers. (In 1914 the French Horticultural Society awarded the polymathic Steichen a gold medal for his delphinium hybrids; a 1936 press release for the one-week Museum of Modern Art exhibition Steichen Delphiniums notes “that the actual delphiniums will be shown in the Museum—not paintings or photographs of them. It will be a ‘personal appearance’ of the flowers themselves,” which the release says are “as creatively produced as his photographs.”)

The Detroit industrialist Charles Lang Freer also makes an appearance, at least symbolically. A passionate collector of Asian art for whom the Smithsonian Institution’s Freer Gallery of Art is named—the completion of which the Meyers oversaw after Freer’s death in 1919—is represented by a bronze ritual wine vessel from the Zhou dynasty, along with petunias, representing truth and dignity, and begonias, representing a dreamy, innocent nature. The exhibition didactics similarly unpack the floral references, inside jokes, biographical details, and historical context behind each panel.

Due to financial setbacks, the Meyers sold their townhouse before the series could be installed. They ended up just fine—he headed up the Federal Reserve from 1930 to 1933 and bought the Washington Post, turning it profitable—but apart from a 1915 exhibition at Knoedler Gallery in New York, the murals remained rolled up in storage at their Mount Kisco, New York country home until, following Agnes Meyer’s death in 1970, the family gave them to MoMA, which once exhibited one of panels before selling the series to Art Bridges—understandably, says Canterbury, despite their remarkable quality and history.

“These are huge works—they’re ten feet tall,” she says. “It’s very unwieldy to have this whole series, as beautiful as they are. They would require a dedicated gallery in perpetuity, or they’d be in storage for a long time.”

Canterbury says the project began early in 2016, when the DMA’s former deputy director of curatorial affairs Olivier Meslay—now director of the Clark Art Institute in Williamstown, Massachusetts—and founding chief conservator Mark Leonard began discussions with Art Bridges, a nonprofit that was in the process of being founded by Alice Walton and dedicated to sharing outstanding works of American art. The DMA got to give the panels their 21st century debut in exchange for its conservation work but had to keep quiet about the project until Art Bridges, which owns the murals and will travel them to other museums, officially announced its formation in September. (Art Bridges maintains a separate collection from the Walton-founded Crystal Bridges Museum of American Art.)

“It’s really great to have these murals together, because it confirms and celebrates Steichen’s genius and brings this part of it back to his creative legacy,” Canterbury says. “It’s a pretty wonderful thing to be involved with.”