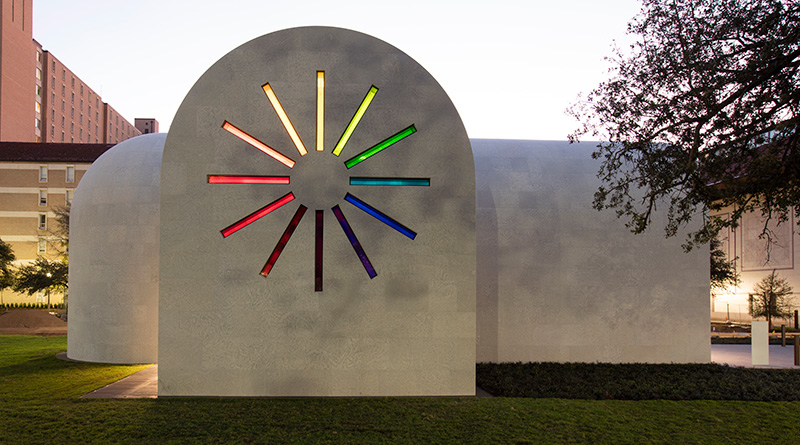 Ellsworth Kelly’s ‘Austin’ comes to Austin and the Blanton

It seems facile to call Ellsworth Kelly’s Austin an instant icon, but an icon it is.

Clad in pale limestone, it is a monumental work of art, the only free-standing building designed by a towering figure of 20th century art. It is the last major project Kelly worked on in the year before his death in December 2015 at the age of 92. And Austin offers a rare immersive experience into Kelly’s modern aesthetic, combining all of his explorations in line, form and color.

Austin opened to the public Feb. 18 at the Blanton Museum of Art, the result of a remarkable and accelerated organizational and fundraising effort on behalf of the museum’s leaders and supporters. The 2,715-square-foot building — a double-barrel-vaulted structure — is now a crowning piece of the museum’s permanent collection.

Just three years have elapsed since the Blanton announced in January 2015 that Kelly had donated the design concepts for the chapel-like building. A groundbreaking happened later that year and in December 2017, the museum announced the completion of its $23 million fundraising campaign.

Sited so that it sits on axis with the Texas State Capital several blocks to the south, Austin now caps the plaza between the Blanton’s two buildings on the southern edge on the University of Texas.

“It creates and defines a meaningful public place both on the campus and within the city,” says Blanton director Simone Wicha. “And it is itself a meaningful space for people to experience. It’s a joyful place and a contemplative place.”

A curious and roundabout path brought Austin to Austin.

Kelly created two models along with many detailed technical drawings which architects drew up blueprints. But as the project grew, Kelly expressed misgivings that his building would be on private land. The project was put aside. And Kelly kept a model studio.

Nearly three decades later, Houston art dealer Hiram Butler began to campaign for interest in the building, eventually attracting the attention of Jeanne and Michael L. Klein, major collectors and long-time Blanton patrons, who in turn brought it to Wicha.

At the time the Blanton had no real relationship with Kelly save one major painting in its collection, High Yellow, which came with the cache of American paintings donated by novelist James A. Michener, and an untitled Kelly print donated by artist Robert Rauschenberg.

But by January 2015 Kelly chose the Blanton and when his gift of the building’s design concept was announced so was its name as Austin, a gesture in keeping with the artist’s tradition of naming his works after the places to which they are connected.

Kelly never came to Texas’ capital city after deciding to place his final work there. Ill health kept him from traveling. But it didn’t stop him from working on every detail.

“Ellsworth was very precise but also very practical,” said Wicha who personally had weekly phone calls with Kelly to review every detail. “He knew he didn’t have a lot of time left and he poured himself into every aspect of the design. In some ways, because he worked out all the design details very closely and in the early part of the construction process, there’s no part of the structure he didn’t consider. It perfectly matches his vision of it.”

When samples of the mouth-blown colored glass for the building’s stained glass windows arrived from Germany, Wicha traveled to Kelly’s upstate New York home and studio.

“When he saw for the first time the colors cast onto the concrete floor of his studio, his face lit up with a smile,” Wicha recalls. “He found so much joy in this project.”

Though Kelly’s own development as an artist straddled the eras during which both Abstract Expressionism and Pop emerged, his work epitomized neither.

Indeed the aesthetic origins of Austin lie in Kelly’s travels through Europe, particularly the seminal period he spent in France (1948-54). Kelly had served in France during World War II and used his monies from the G.I. Bill to study at the École des Beaux-Arts. He rarely attended any classes though and, lacking the ability to speak French very well, he spent long periods alone. (“I liked the silence,” he once said).

He was particularly attracted to Romanesque and Cistercian medieval architecture, finding compelling beauty in the linear simplicity and clear geometries of 11th and 12th century religious buildings.

Carter Foster, now the Blanton’s deputy director and curator of prints and drawings, penned the first art historical essay on Kelly’s building in 2010, tracing out its inspirations before it became Austin.

“Ellsworth wasn’t a religious man and he never intended for (Austin) to be a religious space,” said Foster “Rather, he had a deep appreciation of the historical trajectories of art and architectural history. And at the same time he always was very tuned to art’s spiritual properties.”

In France Kelly made studies of Byzantine frescoes and Romanesque churches aspects of which resonate throughout Austin.

Foster organized Form Into Spirit, a companion exhibit that is a sweeping overview of the artistic development of Austin. The building’s first models and designs are joined by rarely seen early Kelly paintings and drawings. Foster also included sections that illuminate how Austin is the embodiment of the motifs with which Kelly worked.

“Ellsworth was more perceptual than he was theoretical,” said Foster. “He wasn’t theorizing color or shape or form, he observed from nature.”

Austin has three stained glass windows that exemplify Kelly’s explorations in form and color: a geometrical starburst, a color grid and a circle of tumbling squares.

The artist’s equally focused consideration of black and white can be seen in 14 marble panels that hang on the walls, variations of simple abstractions and also Kelly’s very modernist interpretations of the stations of the cross panels he saw in French medieval churches.

At the rear of the single-room building is an 18-foot elongated column made of redwood, one of Kelly’s signature totems, a motif Kelly began using in the early 1970s.

“Ellsworth was always keenly interested in architectural space,” said Foster, a friend of Kelly’s in the last decades of his life. (Foster also claims the only tattoo Kelly ever created, a design of four tumbling squares that Kelly designated as part of his official catalog.)

Early in Kelly’s career, Foster said, architect Le Corbusier once observed the artist’s work and telling him: “There’s no architecture for this type of work yet.”

“I think Kelly made an architecture for his work with Austin,” said Foster. “It’s the realization of so many of his ideas.”

“And it’s exciting because we don’t know all the facets of this work yet. For all its sense of permanence as a building it’s a completely time-based work. The colors and the shapes the windows create on the walls will constantly change with the sun and the time of year and the weather. This building will slowly reveal itself to us what a masterpiece it is.”