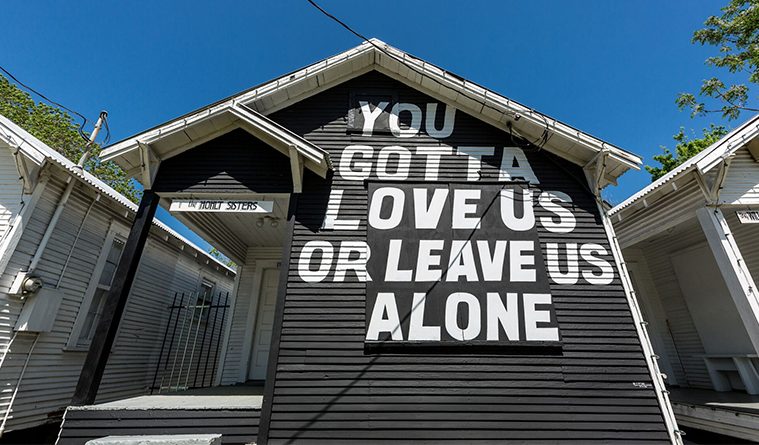 Empathy as an Ultimatum at Project Row Houses 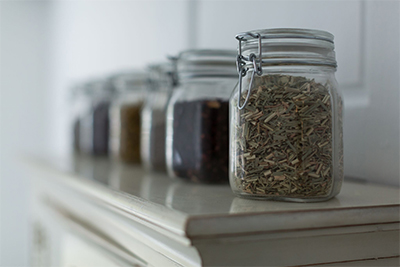 I’ve been thinking about empathy lately: How to generate it in myself and, maybe, as a byproduct, in others.   My recent visit to Project Row Houses’s 46th round of exhibitions, Black Women Artists for Black Lives Matter at Project Row Houses, on view March 25 through June 4, introduced me to a new way to consider empathy: As an ultimatum.

The simultaneously forceful and pleading statement “You gotta love us or leave us alone” is emblazoned on the front of the center row-house. It is an untitled work attributed to Ephemera Group of Black Women Artists for Black Lives Matter. Most of the artists in this round are New York-based, described as “a collective of Black women, queer, and gender non-conforming artists…formed in solidarity with the Black Lives Matter movement,” people who are continually fighting the limits placed on them by dominant aspects of mainstream culture. They state the laudable goal of working with local artists to form a Houston chapter of BWA for BLM.

Many of the pieces in the show are video or media based, relying on screens and projectors. Other installations employ objects and totems—personal and universal—that allow viewers into the nuanced experiences of the artists and other women of color. The more successful pieces from this collaborative incite the senses and emotions, pulling and pushing the viewer directly into bodily relationships with the space they occupy.  These operate on the “love” end of the above mentioned ultimatum.

What a Living World Demands is the house focused on “bodily care” with an installation that ignites all the senses. The sweetly herbal scent of lavender fills the space, piled heap-like on an antique medicine cabinet. Other herbs in jars line the top of the cabinet and instructions for self-care are available for the taking. Perhaps most pointed is the list for “how to sterilize a wound in an unsterile environment,” which provides 17 options for such. It’s a succinct reminder of the inhospitable conditions (medical, social, psychic) that surround the bodies of black and brown people. The personal story of collective member Carolyn Lazard’s struggle with a series of mysterious autoimmune diseases papers the walls of the house. She catalogues at length the body under capitalist forces and her navigation of the medical systems (both here and in France) that commodify human bodies. 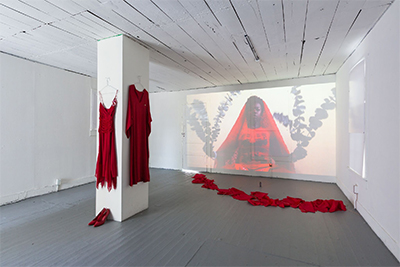 Equally poignant is the house titled A Litany II: (dis)place) which, on its street-facing window, displays images of women killed as a result of police violence. The photos are smiling portraits and selfies, transmuted to shades of gray. These are the kind of images of our own friends or family that we see and “like” on social media each day. They are unspectacular images of daily contentedness, now projected in the context of memorial. Hanging on the wall in juxtaposition to the photos are red dresses that were worn by artists during this round’s opening performance that included “gestures, processions and rituals that explore the multiple nuances of home.” The dresses are human-sized reminders of the physical loss of these women. They are mementi mori, waving like flags in a slight breeze.

A distracting layer of technological and academic distance exists in other installations, perhaps hinting at the second half of the original ultimatum: ”leave us alone.” In The House of Witnessing, the artists rely heavily on digital and new media. To experience one installation fully, the viewer must download an augmented reality app and scan over photographs and objects within the space, which assumes a level of participation that many viewers will be unwilling or unable to provide. This aspect of the installation is particularly confounding—some of the photographs read as digital collages and others are historical, but the augmented-reality imagery felt like obfuscation. A scan over one corner of the room caused what looked like a web-link to floor-mats to appear on my screen. In another instance, a pilot light from a stove appeared and then zinged into my screen’s upper right corner. Inside the space are multiple video installations with music, as well as wall painting and several common houseplants, all of which create a cacophony of disjointed aesthetic and auditory experience. 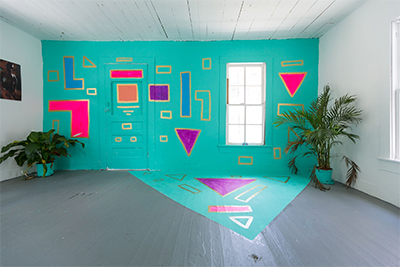 Also present is a more academic nod to the contributions and history of women artists of color (both literary and visual) in the US and UK. Two houses are devoted to installations of this ilk: Well Read Women and THICK/ER BLACK LINES. The most visually striking is THICK/ER BLACK LINES which contains a map of the London “tube” on which the names of artists are transposed over the traditional “stops” on the train. It acknowledges the interconnectedness of one specific artistic community but doesn’t provide specific context for Houston-ites. The slickly produced, graphic poster is a reminder of the vast world of artistic networks to which we may be connected or from which we may be excluded.

In instances where the artists of this PRH round focus on the inherent power of objects (dresses, lists of remedies, even glittering flags labeled JOY or GRIEF), a power echoed by the historic row houses, they succeed in inviting us to share in their experiences. Where the exhibition is less impactful (for example, much of the work that relies on video, apps, or projectors), the artists have set up an artificial and academic distance from their viewers. Art that represents the BLM movement warrants the same mixture of courage, vulnerability, and outrage of the movement itself—challenging viewers to give and receive empathy in the face of brutal realities.