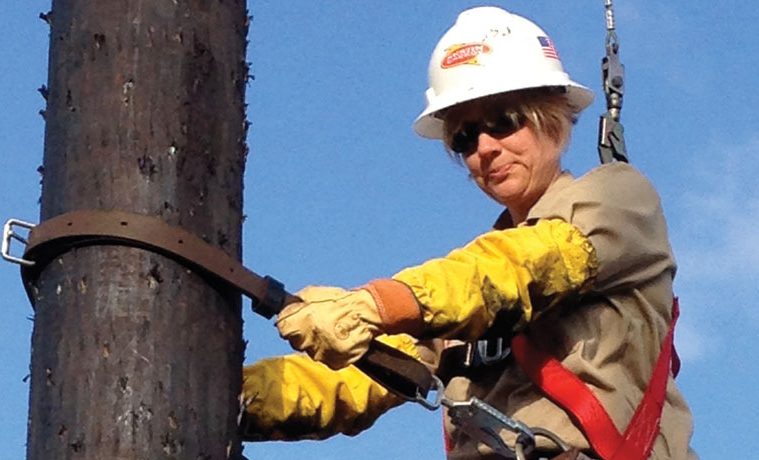 Forklift Dance Works founder Allison Orr, formerly fearful of heights, can now climb a power pole. Don’t expect her to fix your electricity when it goes out, but she knows way more about energy than your average choreographer.

“It’s my job to know how the power travels from the plant to the costumer,” says Orr, who premieres her newest opus, PowerUP – A Performance by the Employees and Machinery of Austin Energy, on Sept. 21- 22, on the grounds of the Travis County Exposition and Heritage Center.

Orr attended a lineman’s rodeo a few years back and thought, “Yes, absolutely we can do a show around this.”  Then she sent herself to pole climbing school to get a better idea of the work into her body.

“I had to show that I was all in. I showed the video of me climbing to recruit performers,” says Orr. “These guys are the last cowboys, and often they come from generations of power workers.”

Thus far, Orr has practiced her unconventional method of dance-making on a traffic officer, 200+ two steppers, Venetian gondoliers, firefighters, roller skaters, maintenance men, a college grounds crew, women over 65, pregnant women, plus trained dancers and dance students of all ages (6 months to 90+). She doesn’t so much make dances as she choreographs the world that is already dancing around us. With a background in anthropology, Orr considers field work first in any dancemaking project.

Orr spent a year getting to know men and women working at Austin Energy before she created her first step. “I’ve interviewed field crews, admin and office-based staff,” she says. “I have probably met over 250 workers, and interviewed over 50.” It’s Orr’s ability to join in that makes her dances so authentic. Orr feels honored to be welcomed into the Austin Energy community.

“I get my inspiration from talking with people about their lives,” she says. “It’s the best part of my job.”

Fresh on the success of The Trash Project, a piece captured by Andrew Garrison’s award-winning film Trash Dance, Orr turned her attention to the power people.

“The film gave the project legitimacy,and it helped with fundraising.”

Orr showed the linemen a snippet of Trash Dance, which was followed by dead silence until one person the chimed in, saying, “Our dance is going to be better than that.” Austin fully embraces Orr’s inclusive method of dancemaking.

The Austin American Statesman named The Trash Project “the year’s #1 Arts Event” upon its premiere. Orr has been named the year’s most outstanding choreographer by The Austin Critics Table three times and The Austin Chronicle’s “Best Movement Illuminator” in 2012.

PowerUP will feature more than 50 linemen and electrical technicians, plus bucket trucks, cranes and field trucks and a set of 25 utility poles. The score is by Orr’s frequent collaborator Graham Reynolds, and will be accompanied by a string orchestra led by Austin Symphony Conductor Peter Bay. Stephen Pruitt’s lighting and production design completes the artistic team. The Trash Project turned out to be terrific practice for PowerUp.

“I’ve learned a lot about navigating city bureaucracy and how to do that with grace, how to work on such a large scale successfully, how to bring on and collaborate with other artists (like Graham and Stephen) so that the dance functions on many levels and the work is stronger, and finally, to dream big, because what seems impossible can actually happen if you just build the relationships.”