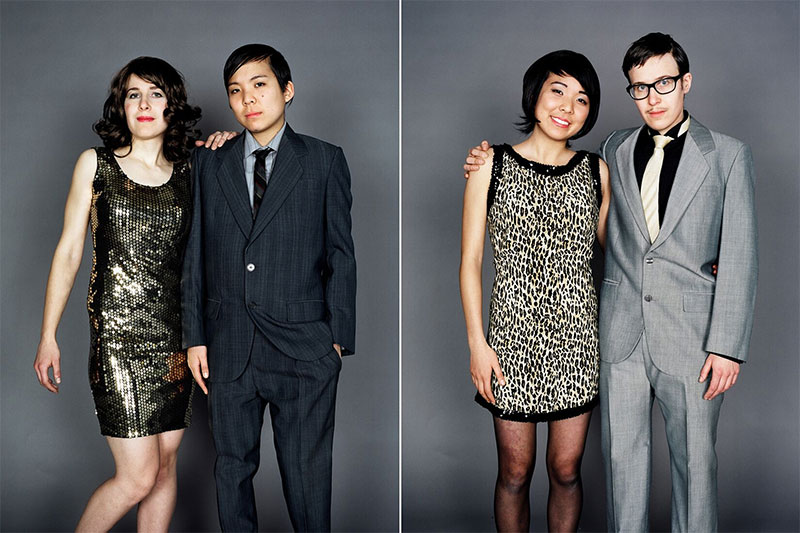 Every Body: Transamerica/n at the McNay

In James Gobel’s 2007 work Robert, we see a bearded and tattooed person—presumably named Robert—wearing a black Morrissey tee-shirt. On a table in front of them, they cut a pattern from a sea foam green fabric, their thick fingers and rocker dude demeanor perhaps belying their dexterity with sewing shears.

Outward appearance is one way that we locate and perform gender. In our clothing, how we move, and our body modifications, we embed codes that signal broader, culturally-determined meanings. Gobel, one of the artists included in the McNay Art Museum’s summer exhibition  Transamerica/n: Gender, Identity, Appearance (June 20-Sept. 15), teases out the juxtapositions of supposed masculinity and femininity, getting at the spaces and overlaps between them.

The McNay describes Transamerica/n as the first broad survey of contemporary art that engages with outward appearance as it constructs gender identities. Timed to honor the 50th anniversary of the Stonewall Riots, the exhibition coincides with a number of others around the country considering the multiple legacies of that event. But in this exhibition, curator René Paul Barilleaux and curatorial team members Jackie Edwards, Bianca Alvarez, and Lauren Thompson propose an exhibition that takes appearance as an in-between place.

“In our view, Transamerica/n represents not just gender identity and trans identity, but also things about transformation, the way that art is transformative, and transnational and transgenerational, a lot of things that cross boundaries,” Barilleaux says. “All of that fluidity is very important.”

In the process of the exhibition planning, the team built two advisory committees: a committee of artists, and a committee of community members engaged in advocacy and activism around LGBTQ issues. “We had to defend [the idea] to the community. They wanted to make sure that transgendered artists were represented and were a real voice in the exhibition,” Barilleaux says. “At the same time, it’s not an exhibition only about LGBTQ issues. It’s about how individuals express their identity through appearance, dress, manner, gesture, and how artists have expressed that.”

The exhibition starts in the 1970s and is arranged thematically, with sections devoted to home and family, performance of dress, and self-reflection. It is timed to open alongside an exhibition of Andy Warhol’s portraits, making a natural segue to questions of self-presentation and performance.

“In the past few years, I’ve seen more and more work dealing with issues of gender and gender identity,” Barilleaux says. He notes the differences in his approach to these questions compared to other curators on the team who grew up in other generations. “We grew up at different times, in different generations, with different points of view, and those shifts in approach, in the world, come through in the show.”

The exhibition weaves together works by well-known and emerging artists, LGBTQ with cis-gendered artists, and San Antonio artists with artists working across North America. “We were very excited that we had all these artists in our community, and that we could use this as an opportunity to foster their work and place them alongside people like Robert Mapplethorpe and Cathie Opie,” Barilleaux says.

Beginning with Warhol’s Polaroid portraits of drag queens from the 1970s, Transamerica/n then looks at Deborah Kass, a Brooklyn-based artist from San Antonio who references Warhol’s work to explore Jewish and female experiences. It then extends out geographically, incorporating works by artists based in Mexico and Canada, and including new commissions by several artists, including José Villalobos, who will create a new performance for the opening. Nicki Lucio will have a studio in the gallery and will be painting self-portraits throughout the run of the show; the painting process will be live-streamed, and the artist will be interacting with visitors to the museum while painting.

Because the exhibition is inherently incomplete and always evolving, the curatorial team decided to launch a microsite within the McNay’s website, rather than producing a traditional catalog. “We see the microsite as part of our documentation,” Barilleaux says. “We are starting to archive and create a space for the artists we are now learning about. We have an idea that once the press becomes involved in this, we are going to see more and more artists coming forward, and we don’t want to lose all that information. This is also how we approach the topic of gender today: it’s very fluid. We wanted the manifestation of the show and the project to reflect that, too. There’s a dynamic quality in the topic that we wanted to physically and intellectually express in the exhibition and anything related to it.”

Gobel begins his process working from photographs before making drawings from them, in pencil and yarn. From these drawings, he builds a mosaic-like surface from felt. When we first see Robert, maybe we think we know what we are looking at. But upon a closer look, the surface is soft, textured, fuzzy, surprising. What we thought we knew starts to blur as we see its surface more clearly, perhaps like the categorical definitions of gender and identity that have marked restrictive modes of thinking and policing bodies.

“I’ve been thinking back over the course of my time in the art world, and there were artists all along dealing with these issues in different ways,” Barilleaux says. “We thought, maybe it’s time to step back and take a look at that in a more comprehensive way.”

He ties the exhibition to a broader institutional mission at the McNay. “Everybody should be seen in the museum. Every body should be represented… that is important to us. We are representing people as themselves, and as they see themselves, from their lived experiences.”