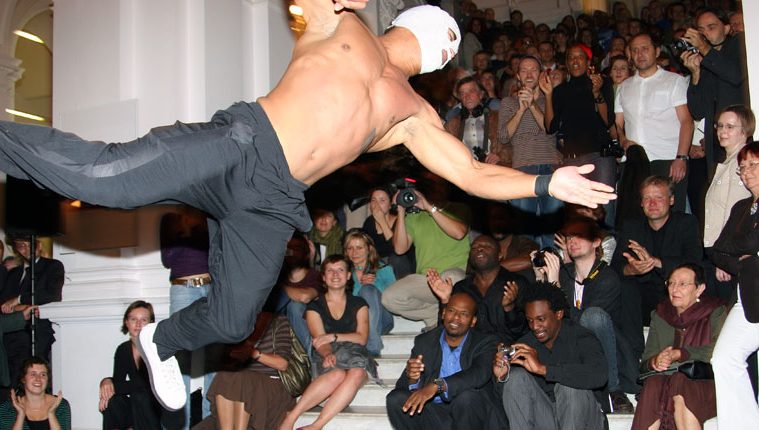 A+C Houston: Reading about Radical Presence, it sounds like the show addresses a misconception – that people associate black performance entirely with theater.

Valerie Cassel Oliver: Well, not so much a misconception of it, but rather where the scholarship is. The scholarship seems to be more solidly about black performance coming specifically out of theater, so while there have been some publications that have addressed it piecemeal or one artist out of a plenitude, this show creates a real examination of those artists working primarily in the visual arena who are doing performance work.

One bridge to that is Benjamin Patterson, who comes out of a classical music background, but then goes into creating visual objects and scores for actions and performances. I’m looking at that particular era – the 1960s – and the practices that are mostly aligned with Fluxus and the constellation of artists and that have that have come out of that period. So Patterson reemerges as sort of a foundational figure in really looking at artists working visually who are engaged in performance.

A+C:  Are other artists from that period following his lead, or are other things happening simultaneously?

VCO:  There are other things happening simultaneously: Los Angeles in the late 1960s and early 1970s, which is the other foundational stream in this, is where artists like Senga Nengudi, Maren Hassinger and Ulysses S. Jenkins come into play. And David Hammons went from Los Angeles to New York then.

There’s no magic bullet, no single impetus or creation theory. There are  lines of thought, and I think the 1960s are always a benchmark. It was a radical moment, a shift – socially, in terms of artistic practices, in terms of politics – it was just seismic.

It’s interesting how certain appreciations always skip a generation, and I think Cliff Owen’s generation is looking back to artists like Patterson. The artists of the 1970s were doing their thing and discovering, and they weren’t necessarily looking at the 60s

David Hammons’s early work is more ritualistic, so there’s sort of a tableau or assemblage of objects, and then there’s this action that happens with it. There are films where artists are creating these actions and filming themselves, very much like early Michael Snow.

So there’s a carryover that isn’t so specifically black; but my interest is in tracing the lineage and that whole arc, because they’re not studied in the same numbers as other artists. If you pick up performance books, you may see something on Adrian Piper or David Hammons, but it’s neglecting other artists who were active during that period of time. So this is just to insert that action and that history into the canon.

A+C:  It starts with the 60s and 70s, but it continues all the way to the present day. How are you organizing the show?

VCO:  The show itself is not necessarily organized chronologically, and I think what’s always great is what the connective tissues are visually. I don’t really try to bring chronological divisions into the space; I try to have it become a revelation: “Oh my God, that was done in 1973, or that was done in – oh, 2010!”

A few artists are debuting pieces here. William Pope.L, or Pope.L, he likes to be called now, is doing not only Eating the Wall Street Journal (2000) – we’ll have the framework of it; he won’t perform it – but he’s also debuting a new piece called Costuming the Body with Nothing.

A+C:  I noticed that Trenton Doyle Hancock has a “performance machine.”

VCO:  It’s an interesting piece called Off-Colored. He had (his gallerist) feed him Jell-O of different colors, and then someone was in the machine with him, and they would throw out colored balloons of the Jell-O that he was eating, so it looked like he was consuming and expelling. He’ll do a version of that here on January 31.

Throughout the run of the exhibit, we’re having roughly 10 performances, and then there’s a recurring performance, which is the Pope.L piece that happens in the space every week. Whenever there’s a critical mass in the space, the performance will take place. It’s supposed to be the encounter of seeing this thing happening, so we don’t want to tell people when it’s happening. But the others are scheduled performance events.

A+C:  One beef I hear some people in the art scene voice about CAMH, which I don’t like hearing, is that CAMH only shows black artists or gay artists these days. What do you think of that?

VCO:  It’s tremendously myopic. No doubt about it, I’m interested in how black artists have moved through the world, but it does not define the museum’s programming, nor does it define the museum. One can’t say that when we’ve just had Jane Alexander on view, or look at the history – Hand + Made (2010) or Splat Boom Pow! (2003), Donald Moffett (2011) – any of number of exhibitions.

The bottom line is that it’s not about black artists – though I would never deny that that’s an interest of mine – but it’s about how to broaden the discussion of things that really define contemporary art practice. Cinema Remixed & Reloaded (2008) was not just talking about black women. It was talking about video, and it was talking about the history of video and the ways and the methods that video has been presented in the white box.

Even though Radical Presence is about black artists working in performance, the subtext is that it is about performance art coming from the visual spectrum and the fact that you can pick up any book on performance and not see these artists in that book. To present someone like Donald Moffett was not just about presenting a gay artist; it was about presenting a painter who is really redefining how we understand painting today.

The art world, I’m sad to say, for the great openness that it considers itself to have, is generally a very narrow, very myopically minded subset of our community. I’m always a little surprised by it, but that’s the way it is. That’s why I’m here.