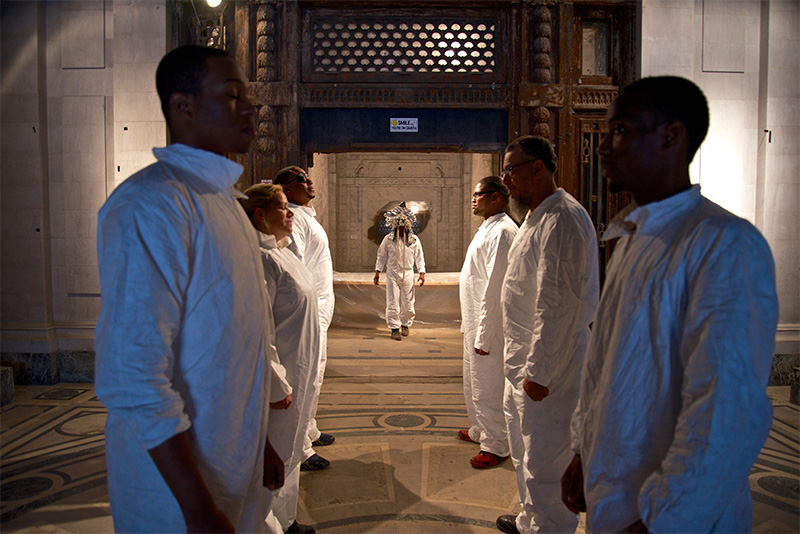 Update: CounterCurrent20 has been cancelled.

Since 2014, Houston has been host to a citywide takeover. For one week in April, the city itself is activated as a site for art, creativity, social consciousness, and dialogue as the CounterCurrent festival and its artists spread throughout the inner loop to hold a series of provocative performances. Hosted April 14-19, 2020 by the University of Houston Cynthia Woods Mitchell Center for the Arts, CounterCurrent is, at its core, a series of reverberations set off throughout the city. Artists and their work respond to each other, their viewers, and the city itself as a means to create engaging dialogues about the past, present, and future of the broader world.

“My favorite thing about CounterCurrent is how the projects reverberate off each other,” said Karen Farber, Director of the Mitchell Center. “I love what discussions arise from seeing the works in such close proximity to one another.”

A strength of the festival is its spirit of collaboration. Farber and her team engage art organizations and spaces on the University of Houston campus and throughout the city, allowing them to engage different audiences while addressing issues of importance to different communities.

“I am eager to see the results of a set of workshops that artist Shaun Leonardo will be holding with youth that are part of the prison diversion program, Houston: reVision,” she stated. Through a partnership with Ryan Dennis, Curator of the Third Ward-based organization Project Row Houses, the festival has been working to support socially-engaged artists. “[The youth] will be in a final performance with Leonardo at Project Row Houses on Saturday afternoon that complements the video installation, Mirror/Echo/Tilt, which will be on view [at Project Row Houses] all week.”

Farber likewise expressed excitement about partnering with the Blaffer Art Museum on the UH campus this year to host a new installation by Margarita Cabrera, a set of talks on Art and Ecology, a pop-up library, and Current Conversations.

Developed by artist Carrie Schneider, these conversations have brought together curious minds from different backgrounds as a means to grow dialogue between the arts and other fields of study. “…there is something about the format Carrie Schneider has developed that works so beautifully with such a range of artists and thinkers.” By drawing throughlines between the artists’ creative explorations and the research being done here in Houston, Schneider’s format offers insight into how creative thinking fosters a stronger sense of progress and understanding.

2020 also promises to be an explosive year for the festival as they bring in the Australian group {the empty set}. “I immediately got excited about {the empty set} because of their mention of ‘engaging with the political, environmental and social acts of destruction that are consuming our current moment’ with a particular nod to the practice of extraction from the earth,” Farber said, explaining that she found the group through their friends at Fusebox Festival in Austin. “That seemed so relevant for Houston audiences, and I thought it would yield really interesting dialogue here. Plus their work is so beautiful.”

The Australian collaborative examines the phenomenon of the explosion, utilizing it as a visual medium to illustrate humanity’s paradoxical desire to revel in its own destruction. Their CounterCurrent project, We Live in Explosive Times, sets the act of destruction at the forefront as a sort of spectator sport.

It seems fitting, this celebration of transformation and redirection of energy, amidst the news that this year’s festival will be the Mitchell Center’s final iteration of CounterCurrent (for now).

“The Mitchell Center is an ever-evolving, responsive organization,” Farber explained. “Before CounterCurrent, we held multiple residencies throughout the year, and we are returning to that structure.” She reiterated that CounterCurrent won’t necessarily be gone forever, saying that the organization wants to spend time focusing on longer term residencies “with artists who can creatively and intellectually connect with our students and faculty, benefitting the university in profound and unpredictable ways.”

The residencies won’t follow a stringent structure but be tailored to artists and their projects with some artists making short, intensive visits to Houston while others make multiple visits throughout the academic year.

“We know there will be some artists who want to teach and others who want to involve students in the making of an artwork outside of the classroom,” she continued. “Right now, we are planning next year’s residencies to begin with a lecture and conclude with a public project or series of projects.”

Whether for CounterCurrent, lectures, or residencies, Farber always considers “why this artist for us, and why us for them?” Considering how their work will resonate with Houston, how the artists themselves benefit from being in Houston, and how they might function in collaboration with the University, Farber weighs her options to ensure that balance is struck.

“We are seeking mutually beneficial partnerships with all of our artists.” Set to announce their first group of artists in residence during the festival, this year’s final CounterCurrent (for now) will allow Houston one more explosive week, while we are certain to feel its reverberations for years to come.