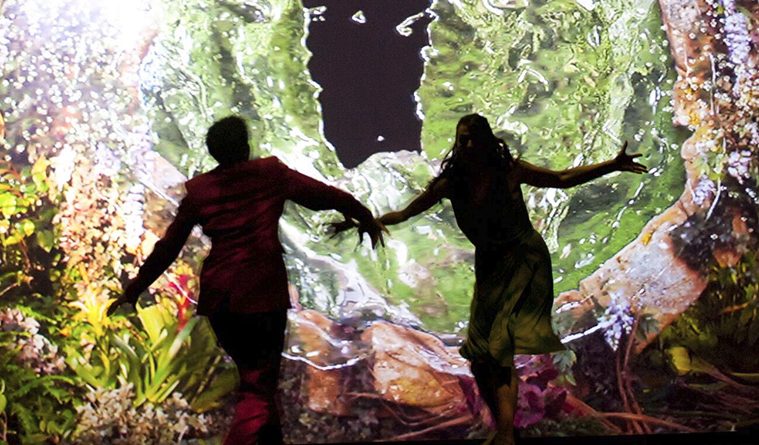 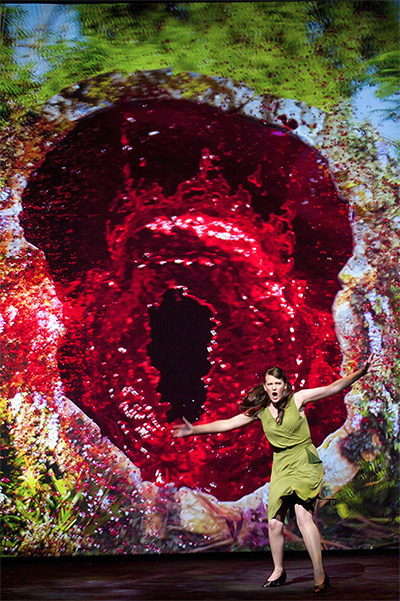 A war has been waging for centuries: words versus music…which is more important in opera?  Composer Richard Strauss devoted an entire opera—Capriccio—to settling that question once and for all. Now along comes Dutch composer/filmmaker/director Michel van der Aa to sweep the battlefield and redefine the question, perhaps even the art form itself. With his fourth opera, Sunken Garden (in its U.S. premiere at The Dallas Opera, March 9-17), Van der Aa is flat-out reinventing opera by adding film to the mix.

Let’s be clear, we’re not talking about shoehorning film into an already established musical drama. That’s been done…a lot. For auteur Michel van der Aa, it’s a means of expression in opera, every bit the equal of words and music.  “Film in my work is never just added on later or used to enlarge things that are already there,” he explains. “It’s an autonomous part of storytelling, extending the music and showing different angles of the piece. When I composed Sunken Garden, I developed all three elements in parallel. For each moment in the opera I can determine which component is most important, so sometimes music takes the fore, and sometimes we’re watching film while music is taking a back seat. Because I wear these three hats [composer/director/filmmaker], I can determine their relationship and make this play of changing perspectives.”

So why give film such primacy in Sunken Garden? What can van der Aa do with film that he can’t with music or stagecraft? “When [Cloud Atlas author and Sunken Garden librettist] David Mitchell and I talked about doing an opera we came to this idea of this space between Heaven and Earth, between life and death, where this evil force keeps people against their will to use their energy to gain eternal life. Early on we started thinking about how we could create such a space onstage; that’s how we got the idea for the 3D film. It has volume and can augment the physical space.” 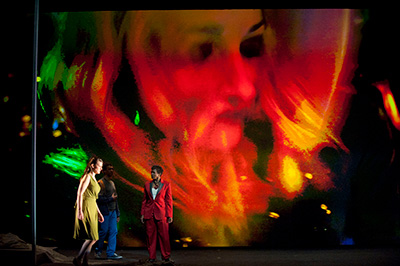 The process of creating this fantastic purgatory onstage led to what is surely Sunken Garden’s greatest coup de théâtre: live singers and hologram singers interacting and performing together. “We wanted to move the characters that are missing in the opera and place them as life sized holograms on the set,” continues van der Aa. “This technique allowed us to do that. Nobody had really done it before, so we had to invent the whole thing and do a lot of testing, first with small models, then on stage.”

This led to some unexpected problems regarding perspective and scale with the filmed singers when interacting with the live ones. “If you film someone in real size, and you put them in the film frame you can determine how big they are. But once they step forward in the 3D film, it becomes difficult to stage real life singers next to them or behind them as the filmed singers become giants. So a lot of the staging part was determining the relationship of the live singers and the holograms to feel like they’re part of the same world, the same space.” 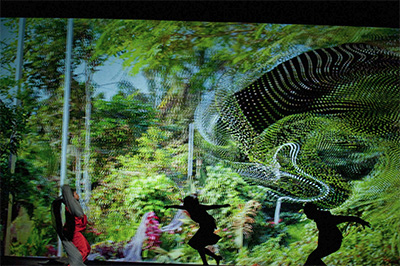 Then there’s the issue of the score. While some moments in Sunken Garden rely on a click track (a series of audio cues to synchronize sound to a moving image) and must rely on the film’s tempo, many other moments do not. “We have an extra musician in the orchestra,” explains Van der Aa, “and he controls a playback of the video and audio electronics. He follows the conductor and therefore the electronics in the film follow the tempo of the conductor. We developed special software that can do that. It’s an organic way of dealing with electronics.”

Unlike many new works, Sunken Garden is no “one and done” flash in the pan that has a world premiere and is never heard again. Following its 2013 world premiere in London, Sunken Garden has been seen in Amsterdam and Lyon, with two semi-staged performances in Germany to offer opera companies a cost-effective alternative to the full technical production. Now the U.S. gets its chance to experience this seminal work in its fully staged original form at Dallas Opera.