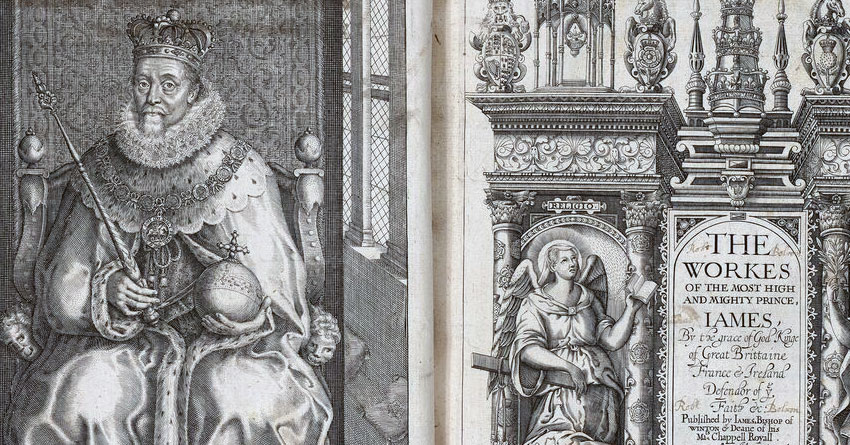 First-Hand: Shakespeare in Print and Performance at the Harry Ransom Center

James I, King of England, 1566-1625, The Workes of the Most High and Mightie Prince, James by the Grace of God, King of Great Britaine, France and Ireland, Defender of the Faith, &c. (London, 1616).
Portrait of King James I. Image courtesy of Harry Ransom Center.

In 1616, William Shakespeare was buried at Holy Trinity church, Stratford-Upon-Avon. A prayer was inscribed on his grave, asking that his bones never be removed from the church and cursing any who might attempt to do so.  Approximately 400 years later, Shakespeare’s life and death remain a mystery relished by researchers, writers, and fans alike, inciting questions of authenticity, a host of apocryphal documents, and countless television specials. But in Austin, Texas one exhibition seeks to tell a different story. “One of the things that we wanted to demonstrate is that there are no known manuscripts or diaries written in Shakespeare’s hand. We wanted to tell the story of Shakespeare through firsthand accounts by his contemporaries, books that Shakespeare would have read while writing his plays, and books printed during Shakespeare’s lifetime,” says Gerald Cloud, Pforzheimer Curator of Early Books and Manuscripts at the Harry Ransom Center.

The Ransom Center will exhibit Shakespeare  in Print and Performance, Dec. 21, 2015-May 29, 2016, part of a global movement to celebrate the legacy of William Shakespeare. The exhibition draws from the Ransom Center’s collections of performance materials, set designs, and printed books. Curators selected materials that show both the origins of Shakespeare’s works, as well as their adaptation since his death. Selections of rare books and texts include the first reference to Shakespeare in print—Robert Greene’s Groats-worth of Wit (1592), as well as  three copies of the first printing of Shakespeare’s collected plays, including the first folio (1623) and a copy of the third folio (1664). Of note are early texts of Shakespeare’s work, such as Cloud’s favorite piece in the exhibition: “…a copy of A Midsummer Night’s Dream dated 1600 with a signature of one of the early owners of the book, George Steevens. Steevens was one of the first important collectors of Shakespeare’s works, as well as an important mid-century scholar of Shakespeare.” Compared with these texts are works from Shakespeare’s contemporaries, including the first edition of the collected works of Ben Jonson, and Christopher Marlowe’s Jew of Malta, along with works that influenced or inspired the playwright, such a Plutarch’s Lives of the Greeks and Romans.

The exhibition’s rare books and texts are meant to build a groundwork on which Shakespeare performance is founded. Printed costume designs and set designs pair with costume pieces, such as a gown worn by Rosalind Iden in the Donald Wolfit Shakespeare Company’s 1945 production of Much Ado About Nothing. Critical reviews, photos of productions, videos, and prompt-books used by actors, which include cues and notations, provide a behind-the-scenes look at the performance of Shakespeare over time.

Eric Colleary, Cline Curator of Theater and Performing Arts at the Ransom Center, points out his favorite piece in the collection, the prompt-book of one particularly notorious actor. “If I had to choose one thing, it would be the promptbook for Richard III that belonged to John Wilkes Booth. Before he was known as the assassin of Abraham Lincoln, Booth was a well-known stage actor. After the assassination the manuscript material related to Booth was destroyed. Very little exists and especially very little relating to his stage work. This is an incredible piece of theater history.” The promptbook is written in Booth’s own hand and can be dated to 1861-1865. Pieces like this show how Shakespeare’s work has been adapted to fit each century, Colleary notes:  “It’s a very different Richard III. He turns Richard III into a tragic hero, which really speaks to what he thought about the character and his own personality.”

The Ransom Center’s Shakespeare  in Print and Performance is a rare journey back in time, showing that while the mystery of Shakespeare lives on 400 years after his death, there is still much to be learned from his work. Studying the changing adaptations of Shakespeare’s work can teach us about ourselves. “They are landing on something about Shakespeare that’s epic and connects to the human experience broadly,” Colleary observes. As for the future of Shakespeare, his work continues to excite imaginations. Will his legacy live on? Colleary states, “I think directors and designers will continue to figure out a way to make Shakespeare relevant to contemporary audiences, whatever the future holds.”