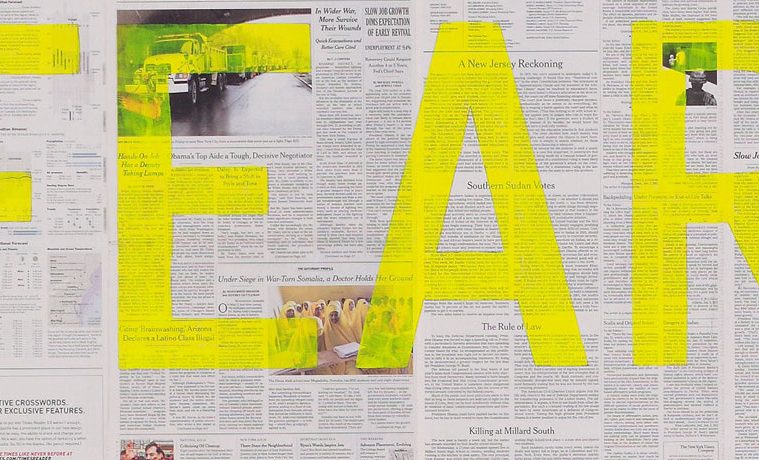 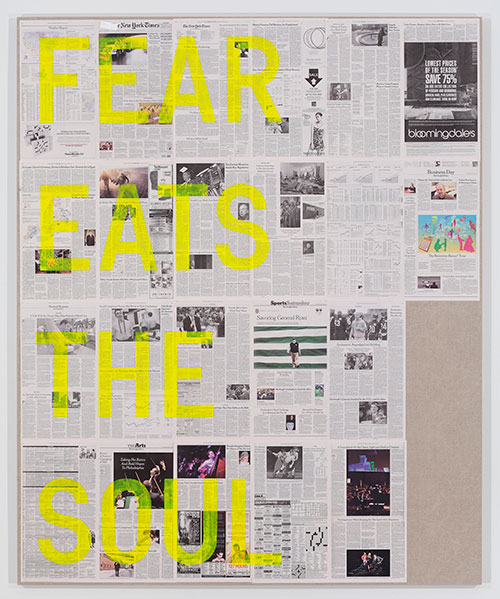 Widely recognized for his work in relational aesthetics that encompasses cooking Thai meals and printing t-shirts in the gallery, Rirkrit Tiravanija’s exhibition at the Modern Art Museum of Fort Worth includes three non-relational works from the past four years. The largest work consists of seven panels of seven consecutive, collaged editions of the New York Times, from Jan. 8-14, 2011. “FEAR EATS THE SOUL” is painted on each panel in four boldly colored lines, referring to Rainer Werner Fassbinder’s film Ali: Fear Eats the Soul.

Owned by a private collector in Fort Worth, this work hangs across the gallery. Jan. 8 was the day U.S. Rep. Gabrielle Giffords (D-Ariz.) was shot in a Tucson parking lot. Tiravanija, who has traveled extensively across the world (as seen in the second work on view), comments on fear-mongering, sensationalist journalism and the relentless, crushing assault of the daily news on its listeners’ souls.

Below the paintings are copper plates placed on bright purple felt. Created from Tiravanija’s numerous passport pages and visas since childhood, these plates are beautiful, shiny objects, drawing the viewer in to gaze closely at the information that still exists from the transfer. Some show cities traveled to, dates, and a few images of the artist as he grew up. The plates glow golden—a reminder that the passport is powerful currency. Tiravanija, son of a Thai diplomat, was born in Argentina and lived in many countries growing up, including Ethiopia, Canada, and Germany as well as his native Thailand. Even today, he splits his time between New York, Berlin and Bangkok. Hence the many pages spread across the table.

Weirdly, the long table holding the plates intersects through two jaggedly-cut vertical walls in the exhibition space. In order to show the work, the artist, who has created architectural interventions in previous exhibitions, had to cut through the walls, as his table would not otherwise fit. The response to the space feels quick, not well thought-out, and even obstructs some of the plates; In the image of untitled 2013 (passport to the middleworld) in the gallery guide, the table is unobstructed and honestly appears better-installed without such wall openings.

Finally, a large vertical television plays on the far end of the exhibition space. Untitled 2014 (equanimous) (portrait, Antoinette: 1.25.07) is a video of the artist’s partner, Antoinette Aurell. The video shows Antoinette from the shoulders up, breathing slowly, eyes semi-closed. There is no sound, just a living portrait. While the video has a very calm presence, it feels a bit like an afterthought. While it does not interact with the other work, one could argue that Antoinette shows equanimity in the face of the “fear” that the artist highlights with his paintings. But that feels like a stretch, and even the gallery guide does not address the work, suggesting that the video was included because Tiravanija ended up with more space to fill than he intended. Leaving it out would have made this FOCUS exhibition more, well…focused.