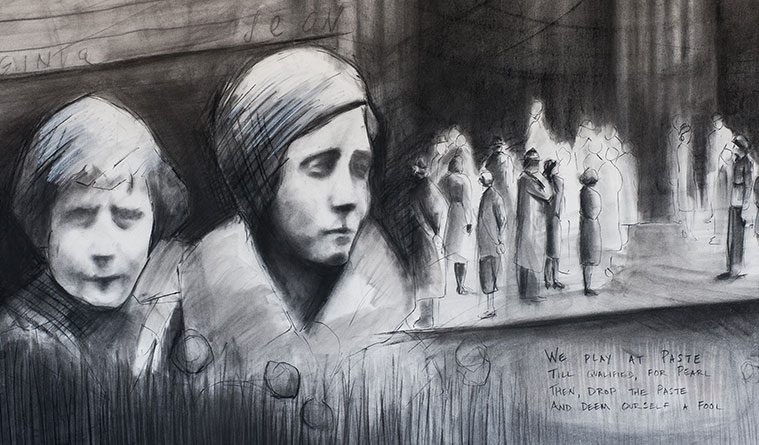 Erika Jaeggli, We Play at Paste,  2015. Charcoal on paper. Courtesy the artist.

Erika Jaeggli’s Meditation on the Fear of Missing Out

Dallas-based artist Erika Jaeggli would like for everyone to know that FOMO is not a new concept. FOMO, or the fear of missing out, is a very real thing, and if you don’t think you suffer from the phobia, you’re wrong. FOMO is the title of Jaeggli’s solo show on view at Dallas’ WAAS Gallery through June 13. The popular notion, it seems, is that FOMO has been greatly exacerbated by the pervasive reach of social media and the image stream we’re constantly bombarded by; people on vacation, friends at a bar, everyone always seeming to be engaged in an activity far more interesting than your own, and, social media’s role in its proliferation is certainly not negligible, but, as Jaeggli illustrates in her work, the concept is actually engrained, it seems, in the very fact of our humanity.

The classically influenced charcoal drawings which compose Jaeggli’s show at WAAS operate on a surprising number of levels (although they all return, eventually, to the same overarching idea). In one series of drawings, Wish You Were Here, Jaeggli recreates images from old postcards, slightly out of focus images of rivers and roadways invoke the nostalgia we, as 21st century humans, associate with the past, specifically here the 1940’s and 50’s, while reminding us that nostalgia isn’t relegated to one period, humans have constantly yearned to be somewhere, or someone else. The very idea of sending a postcard, or receiving a postcard implies a taunting, or a yearning, both flip sides of the same coin, no?

In many of the works on view at WAAS Jaeggli portrays people that are looking, take Palm, shown here, as an example. In others she juxtaposes a foregrounded figure with a hazy background, such as in the lovely We Play With Paste, taking inspiration from photos of her own family, amongst others, both past and present. Both motifs, the haziness and the looking figure, are surprisingly effective methods of encouraging her audience to grapple with what it means to miss out, or as often as not, what it means to be overly concerned with missing out; why is it that we can never be happy with the here and now? 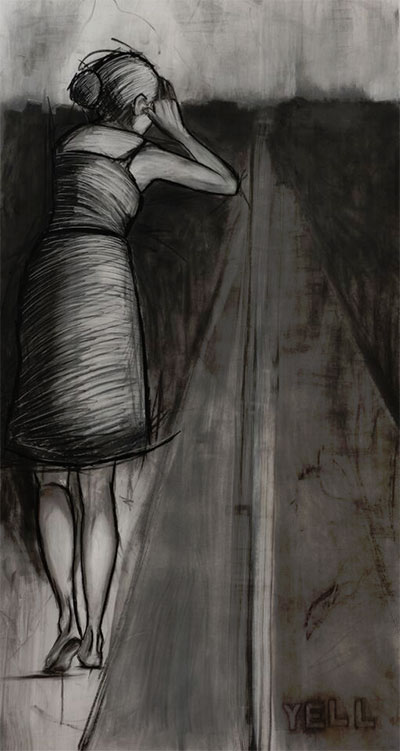 The work in FOMO, as is the risk with any highly potent conceit, occasionally lapses into the overly pedantic, such as in the brief animated video on view in which Jaeggli painstakingly “freezes” a figure in various stages of looking; it’s a successful illustration of the pausing of reality which takes place when we stop to take a photo, but the directness of the overly explanatory nature of the method causes the work to suffer.

I’m the first to wax skeptical on photography’s purpose, how it forces us to miss the present while creating the past, but much of Jaeggli’s work more sympathetically and forcefully conveys the same sentiment in subtler, I would argue, more meaningful ways, while providing viewers with a strong sense of camaraderie; a reminder that we all suffer alike.

Jaeggli is a master at subverting artistic methods, the incorporation of lightness and darkness, foreground and background, to her purposes, which here, afford her viewers an opportunity to contemplate the fleeting nature of existence and the power of images to manipulate our experience of it. The work is literary but subtle, intricate and yet simple, but, perhaps more importantly, it’s effective.