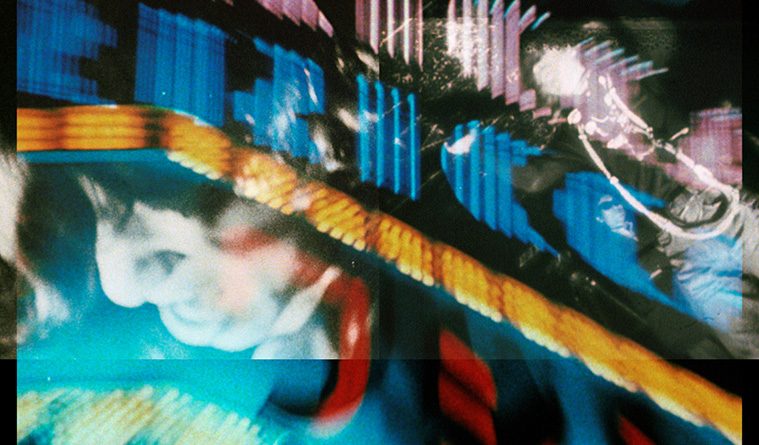 For a New World to Come

Experiments in Japanese Art and Photography, 1968-1979 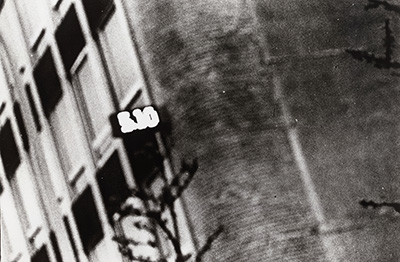 Layered voices and flashing images of social strife and sexuality welcome viewers to For a New World to Come: Experiments in Japanese Art and Photography, 1968-1979. This inaugural effect, contributed by Toshio Matsumoto’s video work For the Damaged Right Eye, sets the tone for this groundbreaking exhibition at the Museum of Fine Arts, Houston, which is on view through July 12. Utilizing more than 250 photographs, photo books, paintings, sculptures, and film-based installations by 29 artists, For a New World to Come reveals the decade following the late 1960s as seminal in both Japanese history and art history. As many artists began to abandon traditional concerns with beauty and construction for conceptualism and its focus on the ‘idea,’ the camera excelled as a special tool though which photographers and other artists might explore, experiment, rebel, and discover.

The first room of For a New World to Come captures the beginning of the antiestablishment and antiwar movements, which reached their prime during 1960s. At first, shots seem quick and dirty; subjects of social and artistic rebellion converge in black and white photos of activists, police force, strippers, car accidents, and stray dogs. In the midst of their off-kilter lens positions, blurry and grainy effects and, smears of movement, a shared raunchy and experimental aesthetic among these urban photos emerges. In Shōmei Tōmatsu’s Oh! Shinjuku, for example, a subject—an identity-obstructing swoosh of hair in front of his face—gapes at the camera, his mouth open as if to scream; another, blurry with movement, captures the drama of a protestor in action—flailing at, and perhaps throwing something toward a group of police. Works in Daidō Moriyama’s series, Accident, exemplify a sense of disorientation. Its loss of detail and flattening, created by high contrast, obstruct images of crashed cars and digital clocks and allow the viewer to distance herself from the emotional content. Through this erosion of the image, viewers can—in a strange paradox—experience the real anxieties of conflict and the passage of time, while also remaining distinctly segregated from, and objective observers of, these subjects. 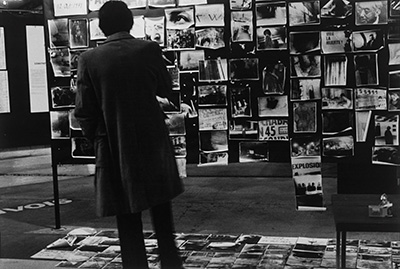 The transition into the show’s second room is like stepping out of a hot bath and into a cool pool. In the 1970s, the focus on societal strife wanes while an interest in the creative utilization of photography in general artistic practice takes flight. This room is all about process. Takuma Nakahira’s Circulation: Date, Place, Events—for which the artist took and publicly posted approximately 100 photographs of his daily life over seven days in Paris—is monumental in size; while Keiji Uematsu’s photographs document his site-specific performances with large wooden blocks (also featured in the exhibition space—stacked from floor to ceiling to create an amusing tension). Moving further still into experimentation, were creative, cross-disciplinary efforts such as photographic recordings of the moon’s movements and translation of such into a musical score by Hitoshi Nomura. While these quieter works are not as visceral as images of protest, artworks that followed in the wake of that conflict and anxiety stand out in this exhibition for their persistent and fruitful artistic experimentation, which yielded unique discoveries—as do some which were paralleled by their contemporary Western colleagues.

Toward the end of the exhibition, an interest in the figural returns. Artists’ documentation of normal, often mundane, scenes can become surprisingly strange or intimate. For Sentimental Journey, Nobuyoshi Araki recorded posed and proper scenes as well as candid sexual moments shared with his wife on their honeymoon. Shigeo Gochō, on the other hand, traveled through crowds to explore the thoughts behind a gaze for Familiar Street Scenes. Although there are consistent techniques, such as obfuscation through high contrast and repeated copying in some of these later works, their effect seems more sophisticated than earlier pieces. While images are abstracted, they retain some of their finer details to reveal more about their subjects.

The similarities between the photographs at the beginning and end of the exhibition give the visitor a sense of having traveled through a cycle of artistic interest, yet the pieces are different enough in subject and tone that a sense of artistic progress is obtained as well. Carefully constructed in academic detail, For a New World to Come is a surreal journey through a dynamic decade in Japanese history, as well as a coming-of-age narrative of Japanese photography within conceptual, modern art.