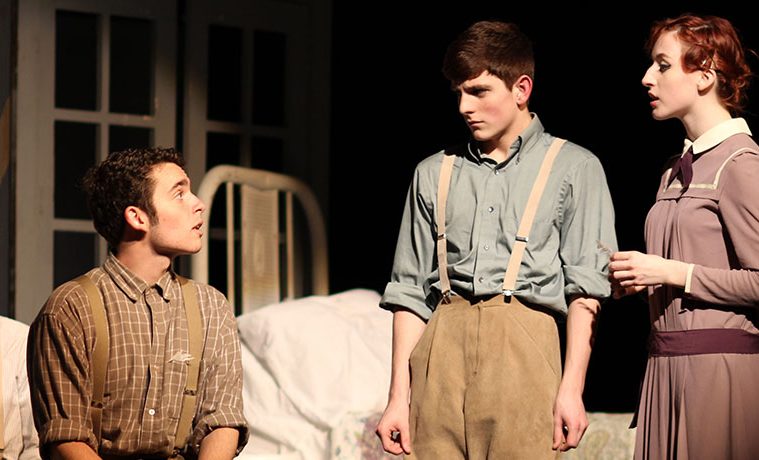 The Texas UIL One Act Play Contest Makes its Mark 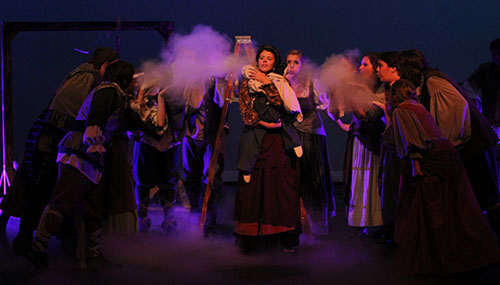 Theater students from Rogers High School, a small 2A school near Temple, TX, wait in the wings of the auditorium. An official with a stopwatch stands in the corner of the backstage area. “One minute,” she warns. “Go.” The students snap into action, seizing blocks and steps, shifting them into position on the stage. They have seven minutes to build their set, brings in props and complete sound and light checks. Philip Taylor, the school’s director, stands watching. These students have helped craft the script to fit the 40-minute time limit, auditioned for parts, scrounged for props, created costumes, and rehearsed, rehearsed, rehearsed. One or two of them spare a glance up at the light bar high overhead. If their palms are sweaty, it’s because when the curtain goes up, this competition matters.

Some people think that Friday Night Lights defines our state’s youth. But football is not the only contest worth watching in the great state of Texas. According to Luis Muñoz, the state theater director of the University Interscholastic League (UIL), 1,220 schools will bring their best performances to the Texas UIL One Act Play (OAP) Contest this spring: That’s a boatload of thespians. Just like Texas football, this monster of a contest gathers high school teams and pits them in the largest U.S. competition of its kind. 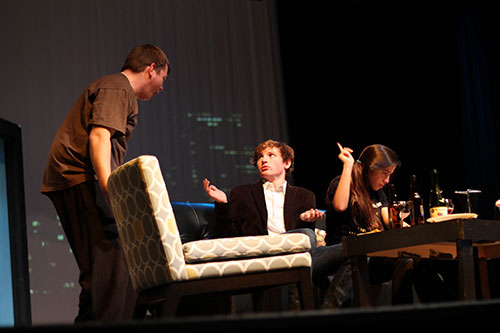 Four or five performances make up a typical OAP day. Adjudicators—hired from a list of more than 200 judges trained and licensed through the Texas Educational Theatre Association—complete written assessments, and give out awards for Honorable Mention Cast, All Star Cast, and Best Actor and Actress and Tech Awards. Only two of the schools will advance to the next level. Each cast performs in a 7/40/7 minute format, using a set of oversized gray building blocks for their set. Each team, advancing or not, is given a complete set of notes by the judge after the awards are done. All teams may listen in on the other teams’ notes, extending the learning experience for every competitor. This process is the same for each level of the competition: Zone, District, Area, Region and ultimately State, held in May after the initial 1,220 schools have been whittled down to 25. For seniors advancing to the finals, it could mean sacrificing the prom and other end of high school events. Success comes at a price.

A RULE BOOK TO REMEMBER

At first glance, the list of OAP rules is draconian; the handbook listing all the rules weighs in at 102 pages. While each individual rule is reasonable, taken as a whole, even an experienced director’s eyes might cross. Set pieces must conform to prescribed size, shape and color. “Scenic additions and restricted properties will be approved only if they are without which the approved play cannot be produced.”

During a 2004 Cy-Fair High School production of Man of LaMancha, the team’s crew built a cart to serve as the primary prop for the chorus. The rules governing that single prop became a major source of panic when the parent scouting for props could only find antique wagon wheels that measured 32 1/2 inches. Luckily, a waiver was granted. Getting it right—or getting a waiver—is imperative, because elimination makes for one really unhappy bus ride home.

Rehearsal times are stricter than Equity rules. From Monday through Thursday the maximum allowable time is two hours, but Friday through Sunday, rehearsal is unlimited. That makes sense since the actors are minor students who have homework to do, in addition to learning lines.

Then there is the process by which a play is picked and the cuts are made to the script to get it under the 40-minute limit. The instructions on choosing a play are short: even if you pick one from the approved list, you must get permission and pay the royalty fee to use that play if it is not in the public domain. If you choose a play not on the approved list…well, the instructions for that are several pages long and contain more cautions than encouragements. A school can jump through all the hoops and still not get permission to enter its first choice. 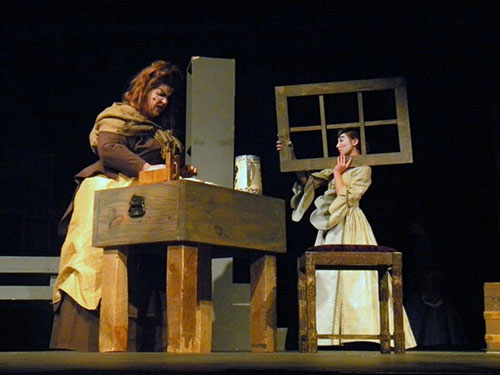 The Cast of The Demons of Fleet Street, directed by Jerry Ayers at Richland High School. Photo by Cassandra Jones.

Texas theater teachers are a driven bunch; many spend the summer months searching for the right script, which will wow the judges. Some even use devised texts, includingTaylor, who has been the Rogers High OAP director for the past four years. In 2013 and 2014, Taylor and his students created the material they performed. Taylor adapted longer scripts from prose and free online stories. “My students then spent a month cutting the longer play to fit into the 40-minute time maximum/limit for the One-Act Play contest,” says Taylor. “The first script devised was Kholstomer: The Story of Horse for the 2013 Contest. I was in constant contact with a theater company in Russia and New York for the public domain version of this story. We received information from both sources and even a Russian translation for the story.”

He even arranged a field trip to a horse facility for their 2013 show, so that the students would have first-hand knowledge of horses for their production. Innovative teaching leads to impressive student efforts; Rogers High has placed at State six times in recent years.

Despite the fact that individuals are recognized, OAP is definitely a team sport. Molly Searcy, a Cy-Fair High School graduate whose production made it to Region, points out that it is impossible to perform within the OAP guidelines without each and every member of the cast and crew working in polished harmony. Searcy brought a sharp edge her portrayal of Nurse Ratched in One Flew Over the Cuckoo’s Nest, and a robust physicality to her Dulcinea in Man of La Mancha.  She loved her experience for the “urgency, import, and camaraderie.”

Notes given Searcy by UIL judges linger with her today. While they might not have made sense to the 17-year-old performer she was then, they make a whole lot of sense now. Searcy has gone on to perform with Stages Repertory Theatre and Houston Grand Opera. 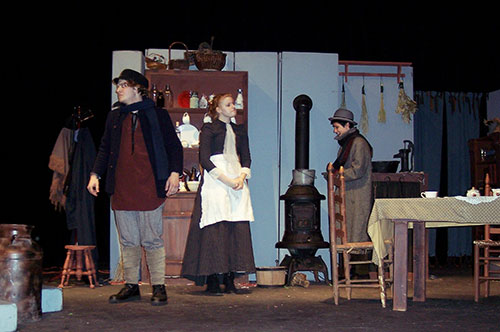 Molly Murphy, a Ball High School graduate, got to perform at State her freshman year.  She appreciated the contest for far more than the competition, leading her to attend the state performances each year with her mom, even if Ball High wasn’t competing. They went for the bonding time, but also because “it was invaluable exposure to an incredible variety of material, ways of performing, and staging.” She currently lives in New York, working as assistant director with the Public and Signature Theaters among others, but, like Searcy, harkens back to her team experience in the OAP as a strong beginning to her career.

Many of our Texas schools have slim budgets, and theater is far down the list for support dollars. Dallas-area actress and musician Elizabeth Evans went to high school in Burke Burnett, outside Wichita Falls. Her school’s theater resources consisted of Mr. Barrow, an intensely committed teacher. For her school’s drama kids, the One Act Play season was the time when they got to be a part of something that showed them theater in a bigger context. Participating in OAP that first year showed Evans that she wasn’t alone. Being in an auditorium filled to the rafters with excited, creative students just like her was a transformative experience. Evans adds, “If your performance is about one person, then you will fail. It has to be about the overall production.”

A newer part of the contest allows junior high and middle school students to participate. Eric Feldman, a former OAP actor from Plano who now teaches middle school theater arts there, says that while some of the students find the rules intimidating, “They quickly catch on and have a great time.” He, like Murphy, found the festival of plays atmosphere a great learning experience for his students.

ONE ACT LEADS TO ANOTHER 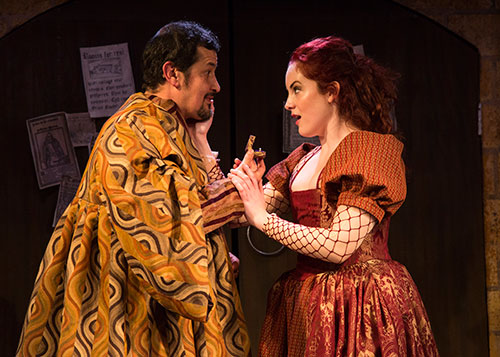 Many working Texan actors are also one-act veterans, and remember their experiences with a mixture of fondness and nostalgia. They often develop a keen ability to spot an unnecessary scene in a script, and do well with limitations, something found quite a bit in today’s smaller theater companies. They often feel as if they were part of something big. Wendy Pratt has been teaching and directing young theater artists for the past several years. “The beauty of the UIL One Act Play Competition is that every school in the state of Texas will expose students to the world of theater,” says Pratt. “Every journey, regardless of whether the school advances or not, will expose students to historical, social, political, and emotional conditions that they explore with a passion and an empathy that will affect them for the rest of their lives.”

In the 87 years since the UIL contest began, it has evolved into something that is “not an event; it’s a phenomenon,” Muñoz said.

This contest has launched many OAP performers onto larger stages. Muñoz listed a stellar cast of television and theater stars, along with  some pretty impressive folks from other walks of life as alumni of this program. Each and every one of the competitors came out with an experience they can carry with them always, whether they go on to be a professional thespian, a teacher, or an enthusiastic theatergoer.