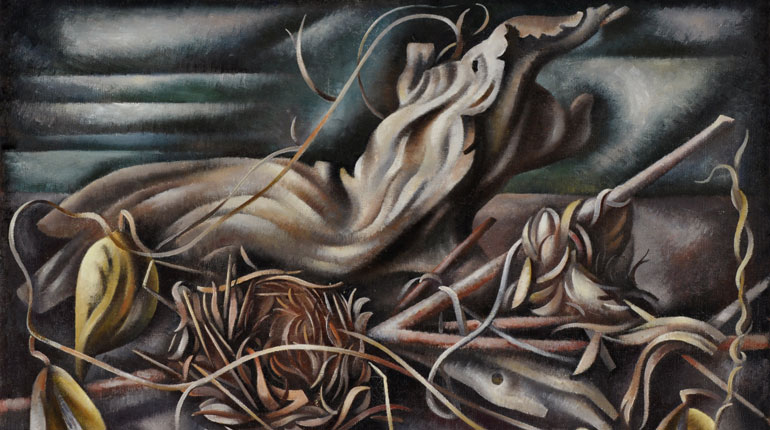 I have found it to be the case — usually — that works seeking (whatever) or perfecting (style) or playing (upon concepts) have higher odds of achieving something other than the mere completion or failure of their desired end, unhealthy perhaps something like good sex, viagra order delicious food, malady or meaningful discourse. Works that somehow manage to accomplish two or all of these, time and again, prove to be the sources of fuller engagement and richer criticism. These works spur conjecture and foster alien thinking; they marry oppositions and divorce similarities (just consider what separates saying from the said). And then there is art inspired by and derivative of such work, work like Loren Mozley’s, whose retrospective exhibition, “Structural Integrity,” is now up at the Dallas Museum of Art.

Mozley’s work demonstrates a true mastery of craft, and as a teacher he was known for having emphasized the learning of traditional painting techniques and formal strategies. As the “world of modern art” was becoming the “contemporary art world” — as the grid was becoming rhizomatic and the Euclidean line was giving way to fractured processes — concepts were taking precedence over techniques. It could once have been reasonably assumed that if one went to art school that one would learn, in the most elementary sense, how to paint or sculpt or print. Not so anymore. One might obtain a BFA in Painting and Drawing and have little skill in either painting or drawing. Ideas, wit, irony, absurdity, oddity, contingency — unique voicing above all — have overtaken, without entirely replacing, craft. And for better and worse, Mozley stood against this trend. He believed that teaching his students the formal and practical elements of art-making were essential to their art education: “I believe in tradition; otherwise, I would not teach.”

As you take in the somewhat modest offering at the DMA, you’ll neither be able to deny his technical proficiency nor his influences — if Cézanne and Cubism had procreated, Mozley’s strategies and styling would’ve been their progeny. It’s almost uncanny. Most of the paintings seem a devout 20th century Cubist’s study of the 19th century French Post-Impressionist’s technique. His recurring subject is the Southwestern landscape, which in every instance appears bound by an invisible law to the grid: There arises no sign of freedom, no hint of improvisation. Still, the works are methodologically nonpareil.

Were you desirous to more meticulously translate the work, you might look to his friendships with O’Keefe or Marin, to see some additional influence there, but you’ll find a palette and techniques more akin to Dasburg. Yet Dasburg (like Cézanne), unlike Mozley, would let perspectives and features get distorted, something Mozley would never do. He believed that an elusive rational order pervaded the universe, and that working in a highly organized and well-structured fashion granted him the possibility of seeing that order. This faith and its subsequent pedagogical commitments clearly shine through Mozley’s work. Accordingly, the retrospective could not have been more appropriately titled.

If you take the time to find out more about Mozley’s life — friendships with Georgia O’Keefe, Frida Kahlo, Diego Rivera, his time in Taos, New York, Paris, his influential role at the University of Texas — you find a terribly interesting person, one dedicated to teaching and professional propriety. His work, however, does not rise above superb regionalist. By his own admission he had no desire to break from or see differently than his influences — by definition making his work derivative. Is this bad? No. It is, according to its own aim, successful. Yet such success comes at the cost of having said nothing original, which is always the price of aligning oneself wholly within traditions not of one’s own construction. He sought nothing new, perfected nothing extant, and only reservedly played upon a few concepts. Does that matter? Toward simple enjoyment, No. Toward navigating the vastness of art and art-making in the 20th century and beyond, Yes.