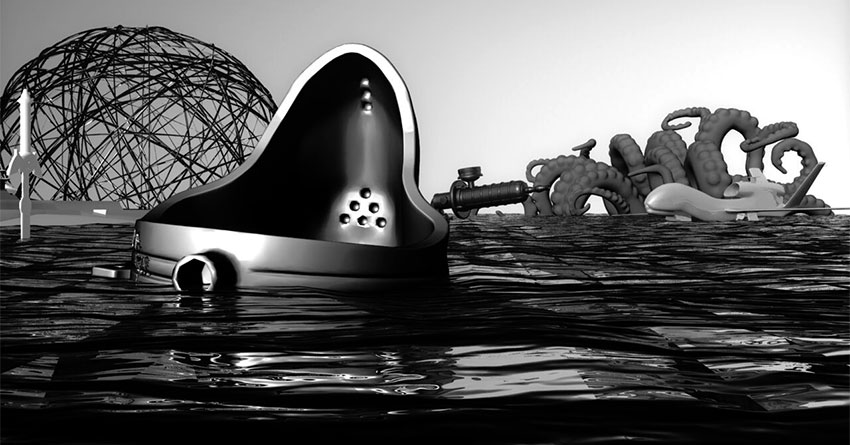 From A – Z: Abracadabra to Zombies

A to Z: Abracadabra to Zombies currently on display at the Pollock Gallery is a phantasmagoria of the now, with our own neuroses as specter.  Here, YouTube rabbit-holes have become otherworldly and the Internet is the stage where the best magic happens. The exhibition is a sort of “ghost in the machine,” the ectoplasm of conspiracy theories and the spiritualism of singularity.

Tracing technology’s magical potential from bygone magic books, artifacts, cameras, and photographs (on loan from the collection of Dallas’ Jack and Beverly Wilgus) to the revolutionary cookbook of Morehshin Allahyari and Daniel Rourke’s 3D Additivist Manifesto, A to Z: Abracadabra to Zombies on view at the Pollock Gallery through Oct. 24, pushes and prods technological insecurities, dependencies, and potentialities.

For this particular grouping, the audio/video work is the strongest. Spanning location and time, the artists chosen for this show connect the dots of humanity’s past 100 years dealing with technology’s mystical growth, and begin to examine how we’ve fared so far as bedfellows. Old Bull Lee himself returns from beyond the grave with an audio piece of his cut-paste recordings, made famous in the 1960s, seeking to mine future realities and progress through collage readings. A prolonged session with the piece can invoke a rhythmic daze, aiding in blurring the line between fact and fiction. It also connects to a projected video piece by Jennifer Procter that has further fun with the alchemy collage work can produce.

Michigan-based Procter’s A Movie (2010) is a shot-for-shot retelling of pioneering filmmaker Bruce Conner’s seminal piece, A Movie (1958), which paved the way for experimental filmmaking and offers multiple gut-punches; cross-cutting imagery collated from online file-sharing sites, meme-mongering home movies, trigger-happy phallic fallacies and the burning towers of 9/11. The film shows how we’ve moved past the political cliché of Conner’s Cold War nightmares, just to transition to the deep ennui of impotent terror-bating on a 24-hour-news cycle.

Is it all a bad thing? Fellow A to Z contributor Neil Harbisson would argue no. Harbisson, a leading Cyborgism artist delivers a video work chronicling the way he sees color through the antenna implanted in his skull. The sight and sound of the piece is rather too reminiscent of a Ted talk, but still manages to haunts with ideas that once seemed science fiction but have now very much arrived.

Part of the show’s foundation is a mining of a personal language, free of sterile jargon, due in large part to the efforts of curator Avram and co-conspirator Morris who both seem interested in excavating technology’s ills and thrills with buoyancy and passion. Avram’s professional history as a photographer plays very much into the framework of the show, as does a long-tenured working history between the two artists/curators from film screenings the pair curated during Avram’s time at Dallas’ Power Station.

Returning to Allahyari, her interests in preservation and the poetry of 3D printing clothe the Pollock Gallery with a different kind of gravitas. There is an immediacy of reflection and preservation embedded in the video for her 3D Additivist Manifesto and Material Speculation: ISIS (2015), a 3D printed sculpture featuring a statue from the Roman period destroyed by ISIS in 2015.  The piece lays out the thesis and goals for the Additivist Movement through a distorted voice, which, when heard through headphones, draws you into a personal, intense one-way conversation that slowly peels away the scales of complicity until you realize the “force” that is to be mobilized against includes our own compliant thinking and doing, both online and in real life. It seems at every turn we are made aware of the physical and existential degradation of language, media, and art. The 3D (re)printing of destroyed artifacts pushes back against such violence with USB implanted replicas, a new twist on an old form of rebellion—creation. The echoes of this video piece created by Allahyari and artistic compatriot, Daniel Rourke, shakes us to our core, out of our dreams, and into a future full of hope and advanced in the intersection of tech and art.

Avram’s and Morris’ interest in our current technological intersection is one that has and continues to be explored across the country. What separates A to Z from the noise is the show’s textured conversations; each piece exists in a timeless conversation with the next, making the issue of our tech-savvy future one of mystery and intrigue. The supplemental artist talks, workshops, and film screenings that corresponded along to the show’s exhibition schedule reflect how the themes of the show are a web of associative questions. The questions you walk away with are personal, and perhaps emotional, reflecting our notions of self through an iPhone darkly.

From A – Z: Abracadabra to Zombies
SMU Pollock Gallery
Through Oct. 24