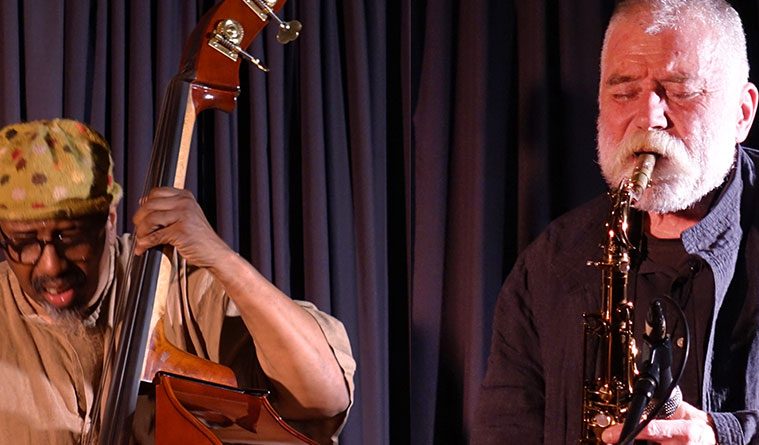 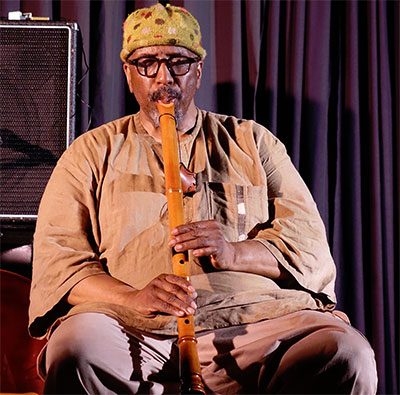 From the first note to the last, they went hard. That’s what they do best. On Friday, May 7th, William Parker, Hamid Drake, and Peter Brötzmann, often referred to as the Die Like a Dog Trio, filled the Eldorado Ballroom with two hours of relentless presence, focus, and intensity. The concert was presented by Nameless Sound and Project Row Houses.

The name, Die Like a Dog, refers to the 1994 Brötzmann recording Die Like A Dog ‎– Fragments Of Music, Life And Death Of Albert Ayler with Parker on bass, Drake on drums and Toshinori Kondo on trumpet. It’s a powerful portrait of Ayler. I wish I had the liner notes on hand because in them  Brötzmann beautifully describes his feelings for Ayler, a saxophone player who shared a similar trajectory, but who never met or played with Brötzmann. Ayler tragically passed in 1970, but listening to that album, his spirit and sound are very much still with us.

This trio plays dense, deep music. They waste no time getting into a full blown fury. It’s amazing how, despite the intensity of the music, they never seem to run out of ideas. There’s no wondering, just a rolling torrent of sound.

I was surprised by the sheer amount of groove. Lots of bands can “groove hard,” but ultimately become slaves to the pulse, or they find themselves unsure what to do with the pulse and abandon it all together, which can go far, but only so far. This trio has found the perfect balance between rhythm and freedom. There were no 10-minute extended funk jams, just a constant stream of focused rhythmic ideas. People say the mark of a true master is effortlessness. Parker and Drake must have such a powerful command of time, it seems so easy for them to slip in and out of the groove. 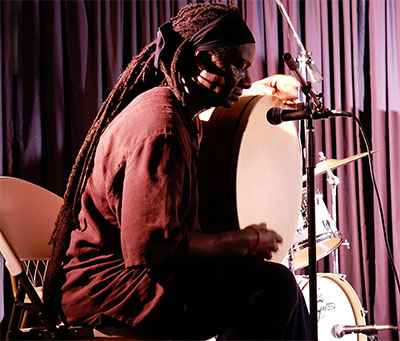 They each have such unique presences on stage. Brötzmann stands still, with his eyes closed, blowing pure energy out of his horn, while Parker digs deep, dancing with his bass. It’s deceptive how easily he seems to be playing it, while producing such a thick sound. Drake’s persona almost steals the show for me. My favorite drummers to watch (and listen to) always manage to command such a huge space. His whole body is so expressive and animated, he looks so excited to be playing each and every idea.

I’m most impressed by how fluid and round their musical vocabularies are. There are so many players who choose to stick to or reject a tradition, trying to position themselves on one side or the other of musical history, but Parker, Drake, and  Brötzmann reconcile tradition and change. I hear ancient ideas in their playing, I hear the history of jazz, I hear the history of free jazz, but it all sounds new. It takes a true master to integrate everything into a focused and coherent body of work.

Going back through Brötzmann’s discography, I like the way he’s mellowed while still retaining power. Some of Brötzmann’s most captivating moments are his most lyrical. I love his insane early recordings, but I’m always a sucker for the bluesy, wailing sax cry toward the heavens moments. 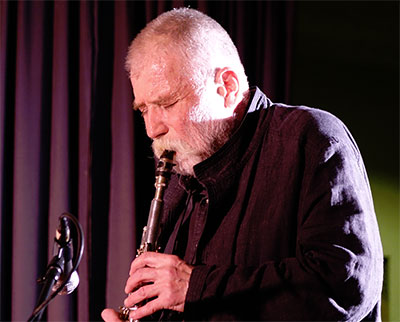 The Eldorado Ballroom is my favorite place to hear this music. I remember my first show there watching Roscoe Mitchell thinking, “this is it.” Drake sounded huge in the room, but never too roomy or washed out. The reverb is just right for a tight, but still thundering, sound. The Ballroom, built in 1939, is an important part of Houston’s musical history. It’s seen its ups and downs but Project Row Houses is doing important work to keep it preserved, hosting community events and incubation projects.

There was a lot of talking at the show, which surprised me. I figure most people that are going to a Nameless Sound show really want to be there and if you don’t want to listen, why are you there? It’s not a punk show at a shitty club where you’re there to chill outside on the patio. Anyway, please be polite and keep quiet. Also, improvised music is wonderful for children, but please take the pups outside if they start crying.