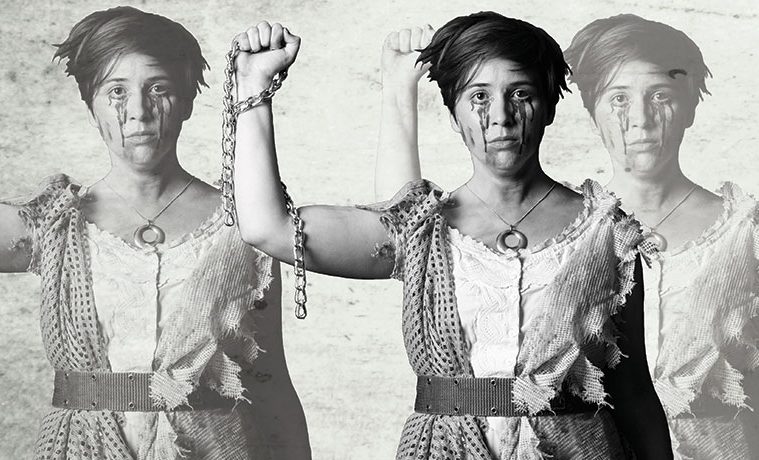 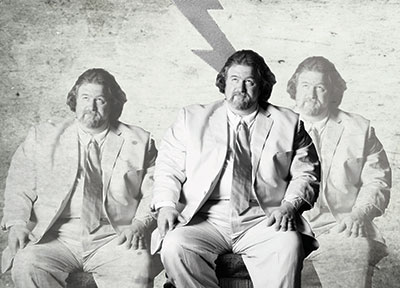 Lowell Bartholomee as Zeus in Deus Ex Machina.
Photo by Will Hollis Snider.

Liz Fisher and Rob Matney want to see what happens when video games and theater collide. Or, rather, if it’s possible to smoothly integrate the technology and protocols of video games into a live-action performance – by giving the audience total control over the narrative.

Through a partnership with Fusebox Festival and Shrewd Productions, the Co-Artistic Directors of Austin’s Whirligig Productions put that question to the test in the company’s inaugural production, Deus Ex Machina, playing at the Long Center For Performing Arts, Jan. 3-18.

A re-imagining of the Greek Orestia tragedies overlaid on a Choose Your Own Adventure structural framework, Deus invites audiences to vote on the performance’s narrative outcome.

Fisher explains, “What we’ve been trying to build is a kind of living video game. Audiences have devices in Deus just like Mario Brothers, just instead of joysticks it’s a phone.” Audience members will text in their votes, but Whirligig wants to make sure that the system is seamless.

Offering twelve major storylines and up to 12,288 unique variations, Deus relies on a sophisticated digital voting system that Matney and Tim Thomas (of Loaded Gun Theory) actually built for the show.  A web-developer with an educational background in philosophy and English literature, Matney’s (and Fisher’s) artistic goal is to see technology and theater gracefully integrated.

But, he laments, “The result is that when technology does get integrated, it tends to be ‘wouldn’t it be cool if?’ And then there’s some gimmicky, bolted-on piece of shit. And it punches you in the face and takes you out of the artistic moment. And so (whether we succeed or fail) our very conscious goal has been to make sure that whatever we do integrate fits the narrative, and that as much as possible it’s submerged within it.”

This often comes down to carefully thinking through banal details, like how to indicate a time frame for voting without relying on a countdown timer. That kind of literal designation detracts from the narrative, in their view, and they hope to be able to define the rules of the game by using the sophisticated tools of the theater itself (lighting, music, ritual).

Fisher sees the relationship of technology and storytelling in her play as a natural evolution: “People understand stories differently now – we’re not in a linear modality anymore for how you tell a story. We understand because of the web that it’s branching. And that’s part of the form that Deus has taken – quite literally, the play branches.”

Her vision for the show began not with her affection for Greek plays, but with a long-time love of Choose Your Own Adventure novels and a desire to see how that might play out in the theater.

She explains, “Theater makers like to talk about, and I think truly believe, that the audience is your scene partner. They’re buying into the world; they’re gonna work with you. And that may be true for some, but not for all – some of them may be anarchists. So we recognize for this show that the audience is an outside force who is imposing its own will on these characters. And once we were able to define the solution like that, we realized there’s a really great precedent for that kind of behavior in the Greek gods. Because they would ask those poor humans to do things that defied the very nature of moral code: kill your daughter because we said so, so you can win a war.”

This realization initiated a long process of reading every single Greek play Fisher could get her hands on, as she laughingly explains, “to find the highest percentage of gods fucking with humans ratio.”

The Orestia became the obvious choice, since the extant variations on the mythology (from Aeschylus, Sophocles, and Euripides) already create a natural sort of multiverse for the story. And if you’re rusty on the storyline, Whirligig has put together a marvelous series of Drunk Orestia videos to catch folks up.

But Fisher’s stories don’t precisely map onto the originals – that would be cheating. Instead her work is a mash up of Greek plays, Shakespeare, and references ranging from Nietzsche to the NBC sitcom, Community, offering audiences a series of delightful allusions to watch for.

Out of the roughly six and a half hours of dramatic content that Fisher has written for the show, each night’s audience will be privy to only an hour and a half to two hours. And what they get to see will be entirely contingent on their collective decisions. 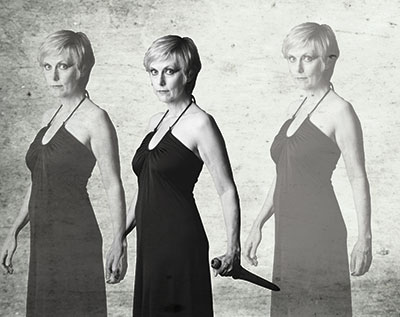 Katherine Catmull as Clytemnestra in Deus Ex Machina.
Photo by Will Hollis Snider.

But since another goal of Deus is to question the role of democracy these days, only the first round of voting will be a simple majority. After that, things get (even more) interesting as the paradigm shifts to an oligarchy – with some audience members arbitrarily gifted more powerful votes and everyone able to buy their way into power at intermission.

With a leaderboard displaying who has the power to turn the narrative tides, Fisher and Matney are excited to see how things play out: if voting guilds will form or actors will solicit friends to attend and campaign for their favorite endings. They’re also curious how differently things might pan out when the audience expands – several performances will be live-streamed, and votes will be accepted regardless of time zone. So audiences all over Texas (and the nation) will get a chance to play God with the actors in Deus.