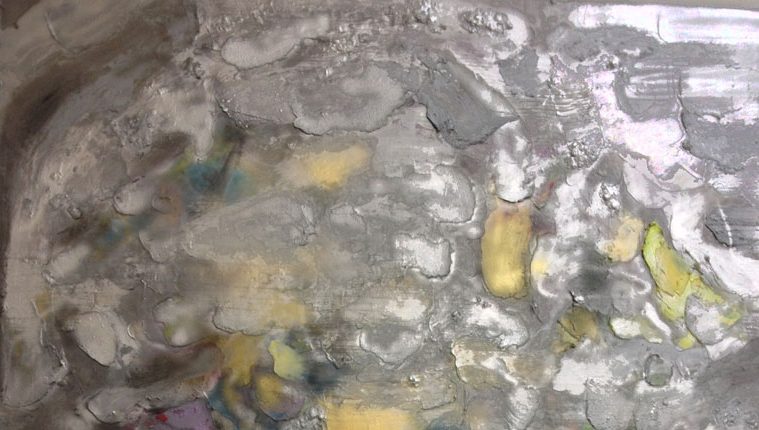 Much has been made – by me as well as others – of the way Houston artist Geoff Hippenstiel moves between figuration and abstraction in paintings that combine over-the-top impasto with metallic silver or gold spray paint. In his second solo outing at Devin Borden Gallery, Hippenstiel turns that movement into a five-part narrative on the progression of a dark yet colorful portrait of a human skull into a gold, abstract monochrome – with the caveat that each “installment” of the story is itself a finished painting.

That’s not to say that they all necessarily look finished. Although – as a wonderful selection of small works in the back room proves – Hippenstiel knows how to make sumptuous, easy-to-love abstractions, he is just as often eager to complicate and even undermine that tendency in his work. That’s what’s happening in Territorial Pissings, his exhibition of large canvases in the front of the gallery.

Indeed, at the opening I was struck by how practically everyone I talked to had one or two paintings they unabashedly loved and one or two that somehow bothered them, yet just which paintings those were varied wildly from viewer to viewer. Some people, for example, gushed about the first painting they approached to the left of the entrance, an expressionist rendering of a human skull in garish polychrome – equal parts virtuosity and kitsch. For me, it was the train wreck I couldn’t turn away from.

Moving clockwise, the next painting’s head is partially obscured by advancing passages of black; its colors are more muted than in the first, though less muted than they appear at first glance. By the third and fourth paintings, metallic paint has mostly taken over, though remnants of color and figurative structure remain. The tension between lavishly painted and Hedda Sterne-like sprayed passages is particularly satisfying in the more silvery of the two.

Gold begins to overtake silver in the fourth painting before obliterating it in the grand finale, a riff on Yves Klein’s gold monochromes. Here, viscous slabs of gold paint congregate around the painting’s edges, while the center bottoms out like a shallow wading pool and bears the last lingering traces of color. In fact, the more you look at those pesky residual traces of red, blue and green, which at first glance look almost like Hippenstiel wiped them from his shoes, the more they register as an afterimage of the skull in the first painting. It’s the damnedest thing.