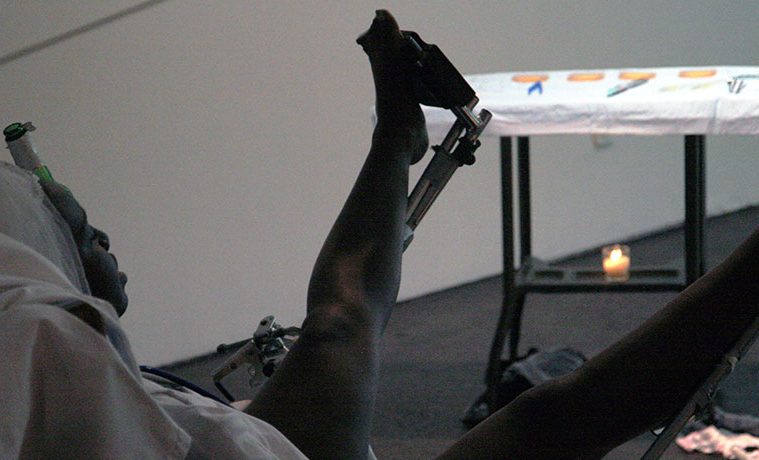 IMAGE ABOVE: Autumn Knight in GYN at Fresh Arts. Photo by Sarah Schellenberg 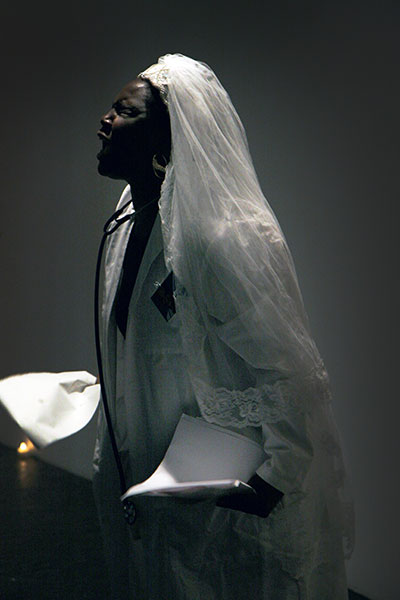 Walking in to Autumn Knight’s installation GYN is to walk into a gynecologist’s office gone completely awry.  The most intriguing object is perhaps the DIY examination chair, an Ikea chair complete with stirrups protruding at an alarmingly high angle. Nearby, the doctor’s steel instruments are laid out on a cart, but at second glance are actually kitchen tools and hardware, such as a peeler, skewers, rusty scissors and bent nails.  There is also a waiting room table, with women’s interest magazines and individually wrapped chocolates.  But, unlike a typical waiting room, the wrappers are littered across the floor and the magazines are bookmarked with sticky notes.  These pieces become clever, and somewhat ominous, foils to their real-world counterparts, highlighting the air of absurdity and possibility of violation that underscores every visit to the gynecologist.

Over the last few years, Knight has been producing a stream of works addressing women’s issues. In this latest work, Knight points to the vulnerability of female patients in the health care system.

GYN also included a coinciding performance.  For the event, Knight would select an audience member to stand-in as a gynecologist, and then read aloud letters written to her past male gynecologists. The letters were based upon experiences that she crowd-sourced specifically for the piece, and Knight masterfully wove together the comedy and the tension of doctor-patient relationships. The anonymous stories touched on everything from changing into examination robes to a particular doctor commenting that his pregnant patient was too poor to support a child.

And yet, despite these distressing narratives, acute political commentary remained largely elusive.  At one point, Knight screamed, “You said my period would be LIGHT,” and then almost as an afterthought added, “it’s not light beer, it’s not light skin.” Knight’s prior work has deftly spoken to the mistreatment of black women within medical communities. It would have been interesting to see a more focused commentary of the politics of sexual health as it relates to women of color within the performance. The installation, however, did include images of pseudo-scientific examinations of black women taped to the front window. 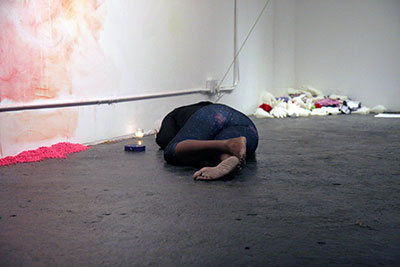 Between reading the letters, the performance also included fantasy-like interludes, for example when Knight sat in the examination chair and viewed a projection of a male doctor sterilizing his hands. As Knight watched the video, she swigged a beer and mimed the doctor’s movements, channeling the clichéd ritual of a woman reminiscing about a past boyfriend.  Surrounded by votive candles and with Sade on the record player, the character Knight plays in GYN undoubtedly has agency in her own erotic fantasies.  But, is it possible that her fantasy is fueled by a desire to just speak frankly and directly to a health care provider? GYN makes a strong case that access to health services and a healthy sexuality go hand in hand.

Such compelling visual and linguistic constructions were abound in GYN.  There are many sections of the exhibition that could easily stand alone as works unto themselves – I haven’t even mentioned the piles of panties in front of the air vent, or the princess vanity mirror secreted away in the corner.   However, this also means that the sheer quantity of ideas and objects present here can be hard to sort through and unite as a cohesive project.  Taken together, the exhibition is an overload of signs and symbols and narratives.

Then again, the female experience is one of overload.  It is one of too many expectations and too many representations, and of impossible contradictions that we must hold in the balance daily.  GYN is scrappy, intractable, hilarious, and heartbreaking.  And it that sense, it rings so, so true.