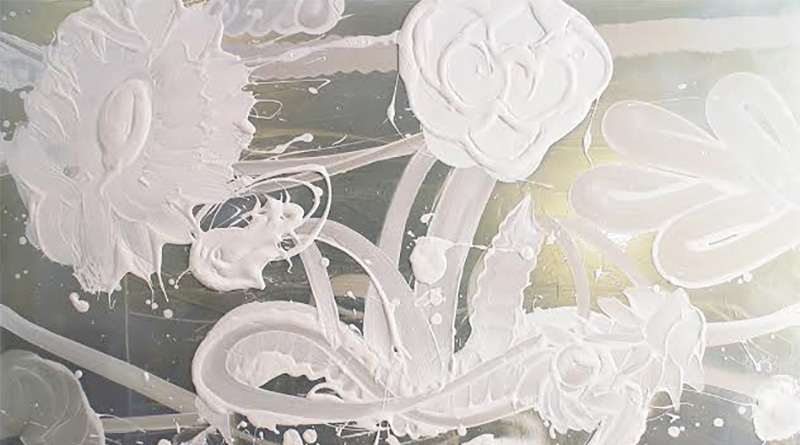 Laptisophon, Geva, and Howe at Conduit

Paint that flows and gracefully frames ideas with gesture and abstraction decidedly reigns in Conduit Gallery’s three newest solo shows.  Each artist sits confidently in the mature period of his or her career as evidenced by the ambition and quality of the work on display.  In the front room, paintings by Tsibi Geva (b. 1951, Israel) exude a strong presence that sets the tone for how to view and experience each of the spaces.

Geva primarily uses bold gestures to propel and push paint over the surface of multilayered canvases, sometimes done in diptychs, which often include recognizable images like birds, tree branches, and flowers.  Earth tones are repeatedly put to good use as a contrast to strong black and white elements set upon a lighter background in paintings that reflect not only the light in Israel but the political tension that wrestles with the formal, psychological, and aesthetic issues proposed by the paintings. Geva contends that this tension “should remain unresolved” suggesting that visitors ponder the work and continually try to pose the right questions about how it reflects conditions in reality.

As a contrast to Geva’s aesthetic propositions, the central space is devoted to Catherine Howe’s (b. 1959, New York) splashy, gesture driven monochromes.   These large paintings offer forms that resemble vases and other still lifes painted over shiny carborundum that makes them seem to flutter and sparkle.  Forms in either black or white flow over surfaces of silvery paint, sometimes an off white, creating depth and visual resonance.  They represent very personal and unique references to Dutch still-life paintings, taken to a new level with the use of reflective materials sometimes applied with a type of automatism.  This notion of chance from surrealist automatic writing adds to the spontaneity of the playful surface and intensifies the experience of these visually arresting paintings.

In the project room, a type of finale comes in the form of mixed media drawings by Stephen Lapthisophon.  These intimate pieces are representative of his practice over the last several years.  They feature not only bold gestures but also various media that he drips, splashes, and pours onto the surface, punctuated with text and scribbles.  These elements share the space with any number of materials not usually associated with painting like coffee grounds, spices, tea, or rosemary, combined with found items from the studio that include newspaper clippings, leaves, and string.  The abstract components are challenged through their juxtaposition with recognizable elements like numbers and letters that sometimes form a particular word.  Lapthisophon’s methods could be compared to the Arte Povera artist’s in Italy during the aftermath ofWorld War II, whose materials and strategies also looked to their immediate environment.  The difference being that Lapthisophon’s concerns, like Howe’s and Geva’s, embrace the here and now.