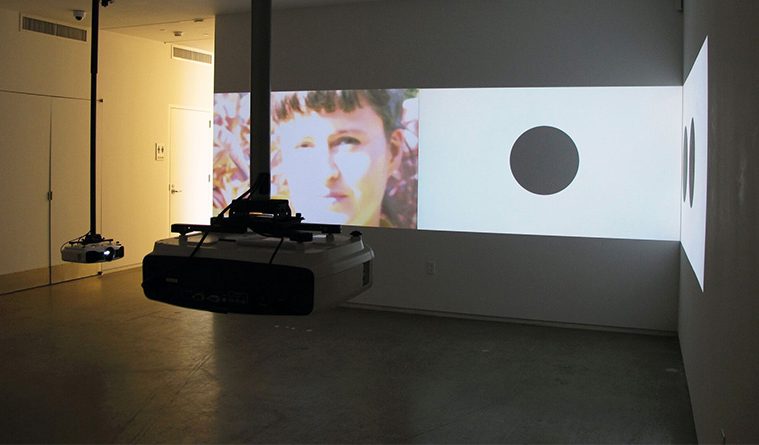 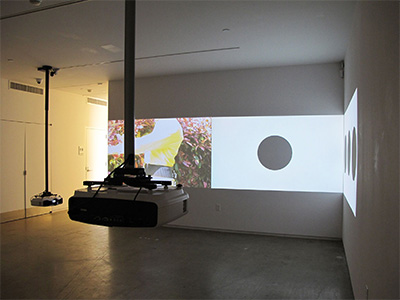 “Casual elegance” is a phrase too often bandied about by women’s clothiers and wine marketers, who would have you believe that it is something that can be purchased or assumed as a posture. For something to be “casually elegant” its level of refinement must be so high that it has become habitual, and only appears casual. Hilary Lloyd’s U.S. debut at the Blaffer Art Museum in Houston, which is on view until September 10, is an object lesson in this definition of casual elegance. And she’s tossed in a few wicked turns of humor to let us know she doesn’t take herself too seriously.

Working in the medium of video and using the language of painting (Lloyd is trained as a painter), the artist sets up certain expectations of how these works will be viewed. But she has dismantled the traditional viewing structures: this experience is neither cinematic nor galleristic; it’s singular. For example, the works are not sequestered in dark rooms. The first work we experience in the larger gallery is Easter Bunny, in which the eponymous cellophaned character “hops” maniacally in a closely cropped shot. Cat greets us at the top of the light-flooded stairs of the Blaffer museum. Projected in a bright space, on a painted surface, Cat would be blinding in traditional cinematic conditions, but here it’s just right. It literally pulls out of the darkness. Whether it’s an Internet obsession or a mere observation, Lloyd casts no judgments one way or the other.

The exhibition holds some 16 works created across 2 continents, some in or near the artist’s London studio, and some filmed around Houston’s very own skyscrapered swamp during her September 2015 visit. Yet location—even subject—doesn’t seem nearly as important as the individual formal elements of each image. Lloyd prioritizes color and shape above all else, and the occasional vague narrative or recognizable thread serves merely as the door through which we may enter a protracted, physical interaction with these works. Tex Mex is a relatable example of this multi-layeredness, an Ed Ruscha-like presentation of text that slowly shifts, loses meaning, and regains new import. She has halved the abbreviated words: each hovers about on its own screen. The sign is reduced to its parts: light, washed out color, and darkness creeping in around the corners.

These videos mostly avoid, and sometimes defy, a sense of narrative. Gun comes the nearest to traditional narrative only in that it sets up an expectation of happening. Chekhov said that if you introduce a gun in the first act it must go off by the third, but what if the “gun” is a goofy cardboard cutout, as in Lloyd’s film? Violence loses all power and meaning, becoming an overplayed cinematic trope. The camera’s interest is in the vibrant yellow of the cardboard-gun-wielder’s dress, or the interplay of leaf shadows on her figure.

Lloyd’s knowledge of her medium: video (and thus light) is such that these highly attuned works come across as easy, an impression which is accented by the fact that you’re likely to view them from the comfort of one of the various cushions she’s generously strewn about the gallery. The arrangement of the works, that the screens are at times propped against the wall, or the projectors propped on humble handmade tables, makes these video works highly approachable.  Adding to this is Rocket Print, long tie-dyed prints that the artist has included as a subtle geometric send up to Houston’s space-exploration past, languorously drapes from floor to ceiling. Similarly, Lloyd wants us to drape ourselves across a cushion and sit a while as the vibrantly colored, bright lights of her video paintings shift and dissolve.