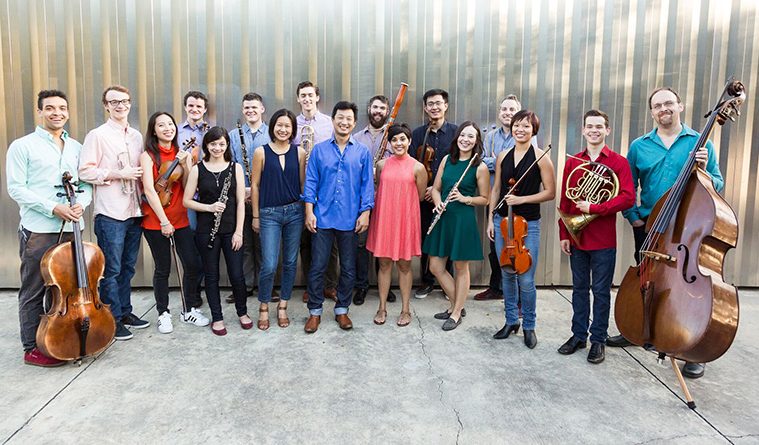 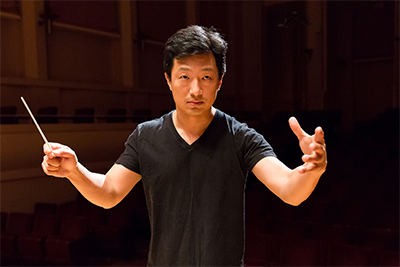 Traditional tunes, rhythms and harmonies played no role.   Instead, the chamber ensemble offered up an ever-shifting soundscape of shimmers, glimmers, rustlings and wisps —Finnish composer Kaija Saariaho’s salute to the Northern Lights. This time, her Lichtbogen for instruments and electronics wafted beneath the southwestern lights of James Turrell’s Twilight Epiphany Skyspace at Rice University. Tucked away at the ground level, Houston’s Loop38 new-music ensemble performed Saariaho’s 1986 tone painting.

“I thought it would be a perfect match for the Skyspace,” Loop38 co-founder and conductor Jerry Hou explained later via e-mail. He and the one-year-old ensemble will unite music and setting again on May 2, when they play Georg Friedrich Haas’s in vain amid the famously dark canvases of the Rothko Chapel. The Austrian composer goes Rothko one better: During part of his hour-long score, the entire concert venue goes black.

“The listener will be plunged into a fluid, changing psychoacoustic world. There are two extended sections of the piece in which Haas instructs that there be total darkness, representing sunrise and sunset, which will be punctuated with pulsing flashes of light. “The music is full of throbbing and pulsing colors that could be considered an aural equivalent of looking at a Rothko,” Hou said.

Hou, who earned a master’s degree in trombone from Rice University’s Shepherd School of Music in 2004, returned three years ago as the school’s assistant conductor. Having worked with new-music groups in New York and Europe, he surveyed the Houston scene and noticed something missing. While Musiqa and other groups spotlighted new works that might involve a handful of players, he said, the city lacked “a larger ensemble of 14-16 players, dedicated to contemporary music.” 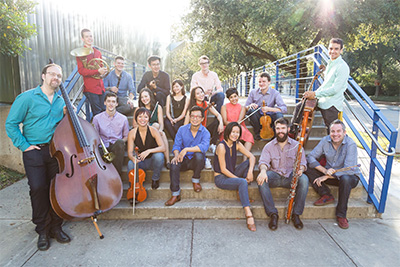 “There was a body of contemporary music that I love and wanted to share with audiences in Houston,” Hou said. “There are many composers whose music is being performed in other major cities in the U.S. or in Europe that we’re not hearing. A lot of the organizations in Houston would present a variety of different performers throughout the season, but I wanted to create an ensemble with a fixed roster, driven by the individual artists in the group.”

So he and pianist Yvonne Chen, a Shepherd School doctoral student, founded Loop38. To flesh out the core group of instrumentalists, Hou said, they enlisted present and past Shepherd School students “because of their artistry, virtuosity, passion for new music, and camaraderie in working together.” The group devised a name that evokes its locale and its mission: Interstate 610 is a 38-mile loop, and tape loops of recorded sound became musical building blocks in the hands of 1960s trailblazers.

Hou is a relatively recent convert to the new-music cause. Raised in Jonesboro, Arkansas, he took up the trombone in junior high school, and he soaked up all the music the public schools offered. “I really didn’t know you could pursue a career in music,” Hou said. “I loved all kinds of music, from top 40 radio, Broadway, jazz to rap.” College introduced him to orchestral music and opera. But new music didn’t draw him in until after his first stint at Rice, when he went to Europe and worked with groups including Pierre Boulez’s Ensemble Intercontemporain. The experience “changed my life artistically,” Hou said.

“I love the process of working with composers and the idea of bringing a new work of art to life. All music was new music at one point, and the possibility of helping the creation of a possible new masterpiece is thrilling. New music challenges us in many ways, both as a listener and performer.”

Performers get plenty of challenges from in vain creator Haas, who has taught at Columbia University since 2013. His works often deal in microtonality—pitches between the ones that a piano’s black and white keys produce. He calls for his 50-minute String Quartet No. 3 to be played in the dark from start to finish. During the two stretches of darkness of in vain, the work in store at the Rothko Chapel, the music unfolds freely and interactively, Hou said. So it demands that the performers not only know their parts by memory, but create their own “individualized aural maps” to guide them.

“Haas wrote in vain in response the rise of the right-wing Freedom Party in the 1999 Austrian elections. The piece conveys, in part, his despair in the face of decaying hopes for social progress. (That) could apply to themes in America today,” Hou said. He thinks resonances like that make new music compelling. “Contemporary music is created by composers who are exposed to the same experiences of daily life as us, and they are expressing these experiences with sound,” Hou said. “Hopefully it allows us to connect with each other in a deeper, more meaningful way, going beyond words.”