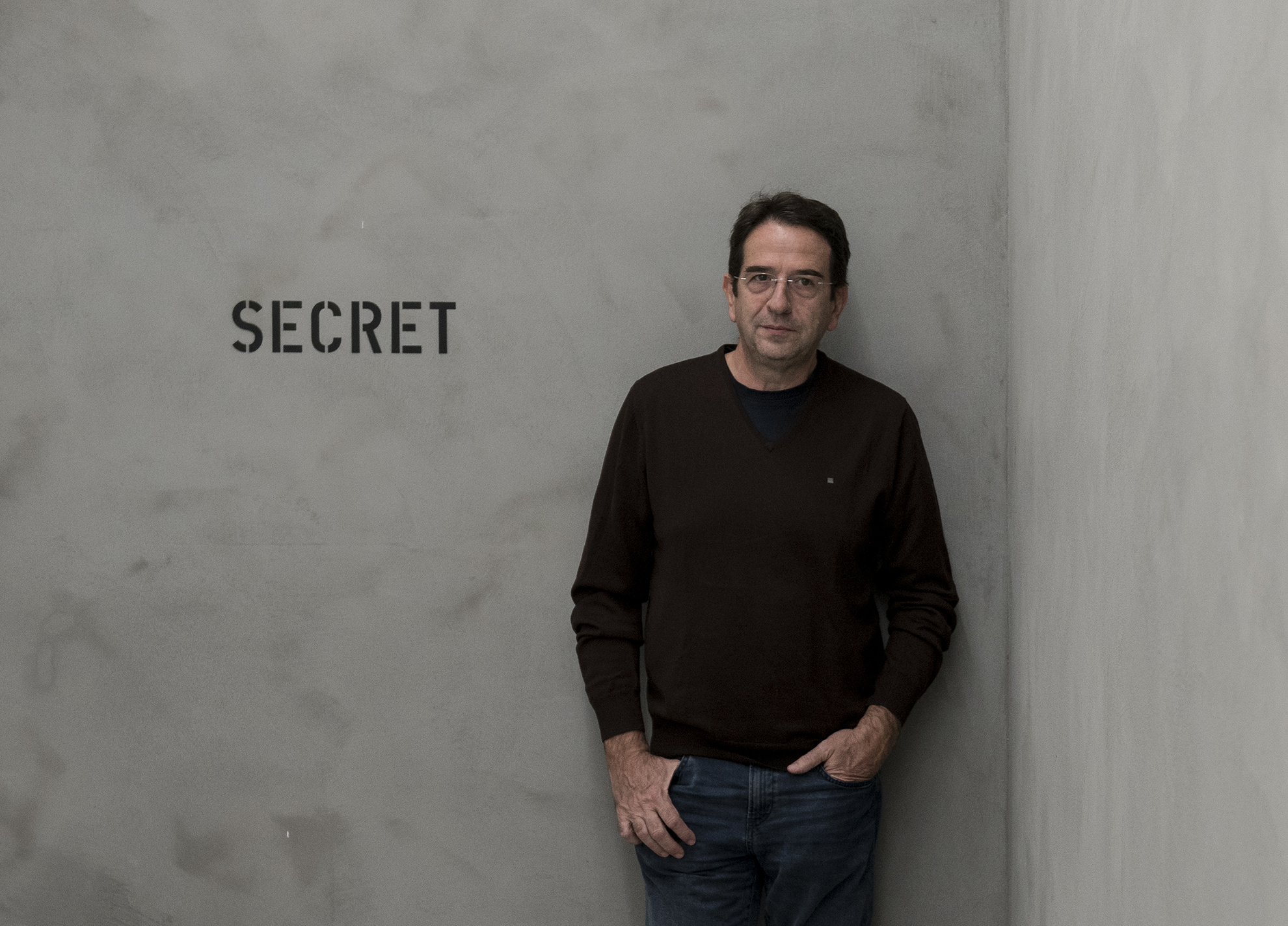 There’s an uncanny feeling you get if you stare at a single word for too long. Like gazing at your own face in the mirror until your reflection becomes unrecognizable—a word can unravel into abstractions, momentarily unmoored from its meaning. It’s a sensation even easier to induce if you are learning a second language, and the mental work of translating symbols into sounds into meaning requires even further effort. I’m not sure if that’s why Ignasi Aballí chose to create his Palabras Vacias in English rather than his native tongue, Spanish, but the ultimate effect is to imbue words with importance and then just as quickly dissolve them into nothingness. Aballí has said that he selects words, such as INVISIBLE, ERASED, and VANISHED, for their lack of associated mental imagery, and yet we are left with a very specific bodily sensation after viewing his installation. The words are cut out of refined stainless steel rectangles and mounted so that they appear to hover in front of the stark wall.

Palabras Vacias, which means “Empty Words”, is on view at SMU’s Meadows Museum through June 26, a minimal contemporary installation in an institution more often associated with the gilded frame than the white cube. Curator Amanda Dotseth met with me to talk about the museum’s pivot, Aballí’s role in their new program to introduce Spanish “artists who haven’t received as much recognition in the U.S.,” and the surprising connections between medieval Spanish art and Aballí’s conceptual minimalism.

MAS: Meadows/ARCO Artist Spotlight was formed in 2019 as a partnership between the Meadows Museum and Spain’s Fundación ARCO. The program, and thus Aballí’s exhibition, was set into motion only to be promptly delayed by a global pandemic. As Dotseth explains, “his exhibition should have been in 2021.” Consequently, the Meadows Museum exhibition lines up with the year in which the artist’s work will represent Spain in the 59th Venice Biennale. This makes 2022 a whirlwind year for Aballí and brings even more attention to the Meadows show. In her curatorial role, Dotseth has worked with Aballí to lay out the site-specific piece in a new way, discussing the arrangement of the walls and the height and placement of the stainless-steel incised palabras. “All of those things matter in a different way when dealing with a contemporary artist,” she says. For example, “I sent him the color Balboa Mist,” to which Aballí responded, “That’s not white enough!”

­­­
“The Meadows has always been interested in contemporary art, all the way back to our founder,” Dotseth explains. Algur H. Meadows “bought works by Joan Miró while he was still alive. Miró himself recommended the two paintings that are now in the collection.” The museum already features work by contemporary sculptor and architect Santiago Calatrava, and one of Jaume Plensa’s ghostly heads graces its front porch. The Meadows/ARCO Spotlight, of which Ignasi Aballí is the official first participant, is meant to be a “continuation and expansion of the Meadows Museum.”

Last year, artist “Secundino Hernández tested the waters, bringing a painting for a pilot program which was eventually acquired by the museum. This gave the Meadows a chance to get “a sense for how people responded to the work.” Dotseth says, “The educational component is really important,” from speaking with a Spanish language class to visiting with SMU’s MFA students. But, “it depends on the artist, it’s very organic.”

With her background in medieval architecture, I asked Dotseth if she sees parallels between the work that Aballí is doing and some of the work of his forebears. “He’s participating in a longer tradition,” she says. “He’s playing with words and imagery, and medieval artists were doing the same thing.” Both historical and contemporary artists are “imagining a world beyond. It’s similar,” she says. Dotseth describes “spaces created knowing that there is going to be ritual or performance,” but in Palabras Vacias the performance is a magic trick—an art piece that implants an idea and shows you how flimsy our communication of ideas can be…built as they are on ever-changing language and fickle symbols.

In recent years it has become (understandably) unfashionable to refer to the medieval era as the “dark ages,” but I wonder if we are living through a similarly “dark” era now, one where our symbols and communications, built and experienced largely in the digital realm, will render us inscrutable to future generations. “Art transgresses limitations of time and materials,” as Amanda Dotseth says, and thankfully Aballí’s Palabras are rendered in steel.