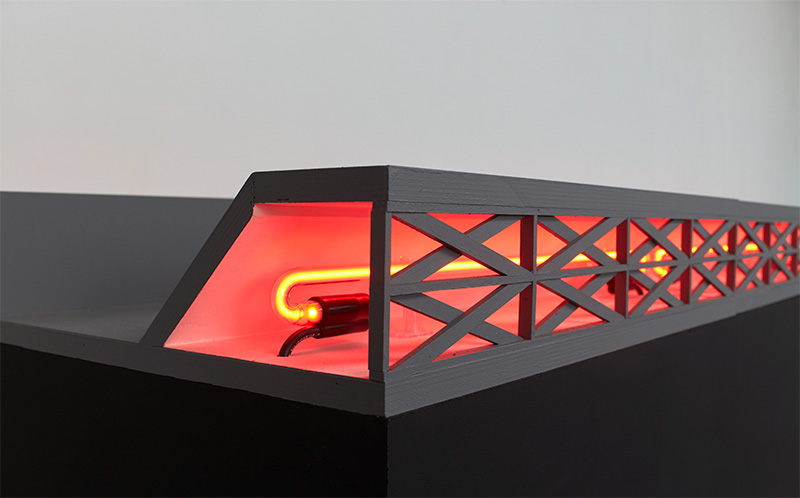 Hypnotized by the Highway with Will Boone at the CAMH

“This morning my wife told me she wants a metal detector for her birthday,” said Will Boone when asked about his artistic process. “I guess being an artist is kind of like that. You’re out there on the beach—this endless and free place—and you’re going around trying to find something of value that you can show people. Some people care, and some people don’t.”

Boone, gearing up for his solo exhibition at Contemporary Arts Museum Houston, The Highway Hex (Nov. 9-Feb. 17), has concocted a body of work inspired in its way by both Leatherface and Stanley Kubrick.

He continued, saying that ultimately more can be gained from the process of digging through the sand, imagining what you might find, than from looking back at what you’ve already found. “That stuff is for other people to enjoy,” he added. “You let it go and look for more stuff because it was never even yours in the first place.”

This sense of meandering motion and forward momentum is key to understanding The Highway Hex. Rooted both in transition and horror movies, the exhibition takes its name from the hypnotic state many enter while on long drives across the country. People have been known to space out for hours at a time, entering their own sort of cruise control and losing themselves in the repetitive nature of the scenery, the asphalt that looks the same ahead and behind.

“Leading up to this show, I was thinking about two kinds of space: the low cavernous subterranean space in the CAMH and the horizon line out in the desert where we spent a long time walking around and filming,” Boone stated, referencing the film at the center of his exhibition, titled Sweet Perfume. “I was spending a lot of time driving along I-10 between Houston and LA, looking at the desert, hanging out at rest stops, that kind of thing.”

Boone’s paintings are seemingly influenced by his locale. While his past works, created during his time in New York are more semiotic—letters stacked on top of one another like the city itself—his new series is one of long, stretching horizons coated in blood.

“It’s funny that a basement and the open sky somehow worked together to influence me,” he ruminates, “and now I have these long paintings that are stretched out sideways, which gives them a different energy.”

Boone calls this new series of paintings “Arterials.” Inspired by its dual reference to “a through road” and oxygenated, bright red blood, he utilizes the intensity of the color in eye burner cadmium paint to mimic the stunning and overdramatic effects of low budget horror flicks.

“I was thinking about how it often looks more like hot rod car paint than something that would come from a person,” he said. “Why would they choose to use that over something more realistic? It’s about the intensity of that color.”

Boone’s interest in the occult, at least insofar as it is portrayed by filmmakers, will become all the clearer upon viewing his own film, which stars Leatherface—of Texas Chainsaw Massacre fame.

“Leatherface is a complicated archetype,” Boone stated as he began empathizing with the character. “He’s sort of like an abused pit bull, sort of like Frankenstein. His behavior is problematic, but you feel bad for him.” He continued, stating that Leatherface was a man-made monster, a product of his environment and the abuse suffered at the hands of his own family.

“It’s probably been 10 years since I watched Texas Chainsaw Massacre, but what I’m talking about is evident at the end of the movie,” he added. “There’s this beautiful scene where the woman has escaped. The sun is coming up, and

Leatherface is left with nothing to do. He begins to dance in the sunshine. I think that’s what he really wants to be doing. That’s what I wanted to explore within my video work.”

In Sweet Perfume, Boone lifts the horror icon, now portrayed by his wife Stephanie Boone, from his traumatic environment and shows her living peacefully in the hills overlooking eastern Los Angeles. Alongside the film, Boone will display props of his own design.

“I love props,” he explained. “I like how they’re ‘fake’ but at the same time imbued with value and meaning through their cinematic employment.” As he made his movie, he noticed that his prop making would sometimes alter the course of the narrative, becoming more important to him than the scene in which it existed. The main sets, he continued, were created inside of his painting studio: a bar and a pawn shop.