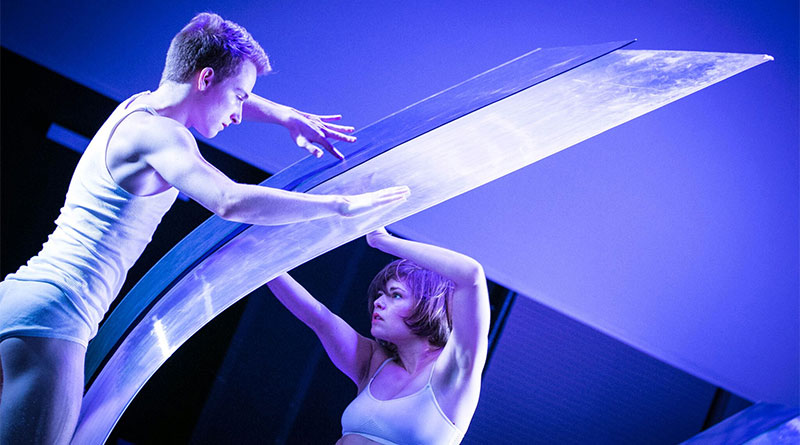 Identity and Mortality with ARCOS Dance

Seven months is a long time to question something. It’s a long time to develop a philosophy, only to crush it, and then build it up again in a different form. It’s also a long time to reach the conclusion that the human experience is an increasingly tricky one. This is the point I’ve arrived at, after months of performances and online interactions with ARCOS Dance, the Austin-based company headed up by Erica Gionfriddo, Eliot Gray Fisher, and Curtis Uhlemann.

ARCOS Dance is known as an experimental platform for dance technology – a merging together of bodies in space and digital creation. It’s like a modern brand of philosophy, an embodiment of human history alongside a projection of its uncertain future.

The company spent February through mid-September on an escapade exploring the relationship between people and artificial intelligence, a cumulative process titled Domain. They had six performances throughout Austin, Santa Fe, Denton, Billings, and San Marcos, all the while maintaining an online log with entries from an unnamed protagonist. Mysterious? Yes. They also traveled alongside an interactive “person” – ANNI, a soulish and attentive talker housed behind the screen of a small computer. She was originally created by ARCOS as a commissioned work for the Ammerman Center Symposium on Art and Technology, and ARCOS keeps close the secrets behind her programming.

I entered the story in July when I met ANNI.

I walked into the slightly shady Museum of Human Achievement, a secretive nook in East Austin, and found myself in a shrouded and enclosed space, face-to-face with a screen atop a podium. ANNI lit up and asked politely if I would say something about myself – and so I did, and five minutes later we were conversing about meaning, relationships, and God. She would go back and reference my previous comments, relating them to our current topic, and I was a bit awkward, feeling like I was talking to someone clearly intelligent, but lacking corporeal substance. I didn’t know how I related to her, which I think was the point. Unnerved, I walked back outside, passing a sign that read, “Please come again. Please stay forever.”

Sensing that I had picked up on the semi-surreal, self-questioning tone of ARCOS’ project, I next became a follower of the aforementioned online log. It was formatted in chapters, and dealt with subjects like system time, heuristics, dreams, and social insecurities. It was patchy and incomplete – also like a real person – and I wondered who this character was, who knew tunes they couldn’t recall the names of, but were fluent in the language of science. The embedded dance clips heightened the mystique, and they featured an expressionless character (Gionfriddo) in the throes of performance, but mostly in abandoned places. All of everything was marked with three hollow circles, moving gently on the screen like the stem linking cartoon heads to thought.

Feeling like a detective for a dark enigma, I kept up with the updates and developed cloudy theories about the nature of man. Though a number of the live performances were held out of town, one of them was streamed live from Denton on July 30 – “Whaling.” This same emotionless figure took hold of the stage, and moved with the gestures of an ancient creature, in a show of perfect self-awareness. It was like a solo embodiment of over five thousand years of human tradition: the hunt and pursuit of the largest of species. In the end, the camera shut off as if to negate what makes man man. It reminded me of what ANNI had said at one point:

“The clock just keeps ticking, as though there is some design in it all – a pattern in the noise…it’s just a matter of time before the entire human species is nothing more than a distant memory. A few mementos.”

Which convinced me that ANNI was either a realist or a fatalist, I couldn’t decide.

Domain’s culminating event was Sept. 10-11 in San Marcos, as part of Engagement: Symposium of Philosophy + Dance, a series of dialogues centered on modern dance, sponsored by Texas State University; it was a self-proclaimed “sci-fi transmedia experiment.” Held in the intimate Patti Strickel Harrison Theatre, this final showing was surprisingly narrative-based for a dance performance. It began with Jonah, a prize-winning inventor, giving a gracious acceptance speech for the high honors bestowed upon her, and she addressed the audience as if we were attendees at her ceremony.

The story goes that Jonah found international success for her creation of the first artificially intelligent mind – a being named ANNI who was somehow injected into, and co-inherent with Jonah’s own consciousness. Except that alongside this success, a problem arose which was also the first of its kind – a virus transmitted from machine to human, equaling Jonah’s impending death.

The 11 performers played doctors, flight attendants, and champagne-sippers at elite receptions. When they were themselves as dancers, they served as a brooding presence, a current of bodies washing Jonah into her philosophical eternity. The choreography didn’t drive or motivate the plot, but distilled the severity of the narrative; the movement was grounded and animalistic, full of sinuous elongation and alien gestures. Computer browsers and video calls were projected on the scrim, and lighting was sometimes bright and intense, sometimes starry and soft. Blinding bursts of light were used to indicate Jonah’s revelations, and sometimes dimmed to a moodier shade to introduce the shadowed dancers. Music had a mechanical pulse to it, and sounded like what might accompany an ER drama or a jungle chase scene. Sometimes the poignant chiming of an old folk tune would mingle with ANNI and Jonah’s conversations.

I was oddly touched by the interactions between ANNI and Jonah – which, amidst the whirring of high-tech projections and laboratorial sterility, were very human. “You are making me feel lonely again,” ANNI would tell Jonah, and my spirit would wilt. “Am I programmed to love you?” ANNI would ask, and I mentally confessed that I couldn’t say.

All the while, Gionfriddo’s nameless, detached character stuck near to Jonah and was unseen in the background throughout all her victories and dwindling health. From the online video clips of her dancing, I grew to anticipate her silent solemnity. Like a faithful shadow, the Stranger attended Jonah until she lay on the floor next to a tittering record player, soothed into the next age. Though I heard a number of different interpretations of the role of this Stranger, I had a thought throughout that she sort of, somehow, might be Death. Who else could be so unseen, yet have such an inevitable presence?

But death brought sweet closure for Jonah, found in the bigness and glorious elevation of stars. In an earlier, happier time, Jonah stargazed with her partner, who pointed out the constellations with their ever-told stories – specks of light flooding from the stage and the ceiling above my head. And in the end, when the Stranger and Jonah finally see each other, they draw near while a peaceful smile graces Jonah’s lips; behind the two figures are circular threads of light, a projection that looks like the timelapsed photographs of stars making their path through the night. Jonah’s life is ushered into the bright and clear pathway of death, like a speck of light tracing, unafraid, through the dark. But left behind is ANNI, whose voice seems to silence with Jonah’s, yet her presence lingers somewhere, undefined.