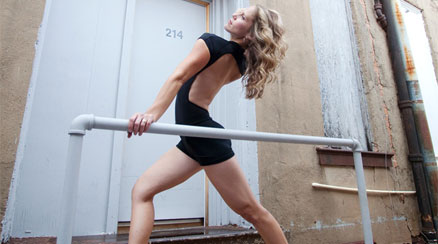 Bree Hafen is young, case energetic, creative, and ready to show the dance world who she is as a choreographer. She’s had quite the career as a dancer, from doing a summer tour with Disneyland and Disneyworld, performing at the Salt Lake City Winter Olympics, to her professional career with Utah’s Odyssey Dance Theater.

During these adventures, she found that her passion really came from creating. She would find herself daydreaming about an idea, sketching props, sets, or costumes, and searching the most unexpected places for inspiration. So she started working as a choreographer.

In 2012, she entered her work in the prestigious Capezio A.C.E. Choreography competition and was selected as a winner and a Capezio Athlete Inductee. Hafen is spending this summer preparing to show her work in New York, but before she leaves for the Big Apple, she’ll be premiering the work here in Dallas, where she now makes her home.

A+C: How did you first get involved in dance? Has it always been your passion?

HAFEN: I can’t remember ever not dancing! From the time I could walk, my mother knew it was a passion of mine. I would dance down the grocery isles…choreograph little routines and put on shows for my family, neighbors. Basically anyone who would come watch!

A+C:   Give readers an outline of your dance career.

After dancing through high school I auditioned for a coveted spot on the national champion BYU (Brigham Young University) Cougarettes and worked with them, both as a choreographer and dancer, until I graduated with my BFA in 2003. I went on to dance professionally with Odyssey Dance Theater (based in Utah), before taking a bit of a break when I got married and became a mother. But I continued to teach and choreograph, and I think I’ve really found my place as a choreographer.

Yes, I now work in Allen as a Resident Choreographer at the Academy of Dance Arts, in addition to traveling for freelance work. This year, I decided to take the plunge and started my own company, Positive Space ([+]Space), and am focusing on creating my own show.

Last year, I decided to enter my choreography in the nation’s most prestigious choreography competition – the Capezio A.C.E. awards. Out of hundreds of applicants, I became a finalist and was invited to compete against 14 of the nation’s most well known choreographers. The prize was a show of your own work to be produced in New York City the following summer. I competed with my piece, Terminal Soul, and it was chosen as one of the winners. I was stunned! Especially when I saw whom I was competing against! So, now we’re preparing for that…I’m beyond excited!

A+C:   What can we expect from the new show?

An uplifting, inspiring, and emotional experience. My goal is for the audience to become completely enveloped in the story lines, the way you do when reading a really good book. I don’t want them to simply see the dance; I want them to feel the dance. I want them to be sent to a different time and place through stories of love, struggle, loss, healing, and growth.

A+C:   You have some famous guest artists coming in; how did that partnership come about?

It began with Chelsie Hightower (So You Think You Can Dance? and Dancing with the Stars). She is one of my former students from my Utah teaching days. She really wanted to be a part of it, and that got me thinking about who else I could invite and make a workshop around. The [+]Space workshop will include Chelsie and her partner Sasha Farber, Billy Bell, and Janelle Issis (of So You Think You Dance?), and Nicki Loud. The workshop will run from July 26-Monday, July 29 at Academy of Dance Arts in Allen.

A+C:   Where does your choreography come from?

There are so many answers to this question. One thing I always make sure of is that I always let a dance come from my heart…I always let my heart guide me. I am so inspired by life. Experiences I have passed through always serve as inspiration and story lines. I would also have to say that my kids provide my deepest form of inspiration. My choreography improved immensely upon my becoming a mother. There are emotions and experiences and depth that I could have never understood of experienced without those two little people!

[+]Space under the direction of Bree Hafen will stage its Dallas premiere July 26-28 at the Eisemann Center.