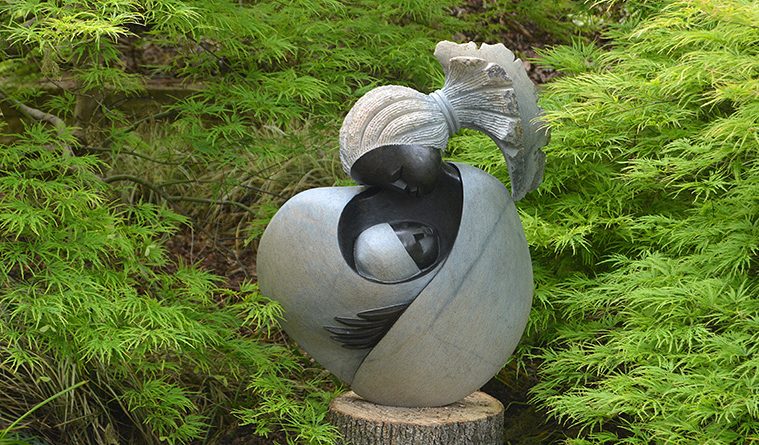 In the Garden: Zimbabwean Sculpture at the Dallas Arboretum 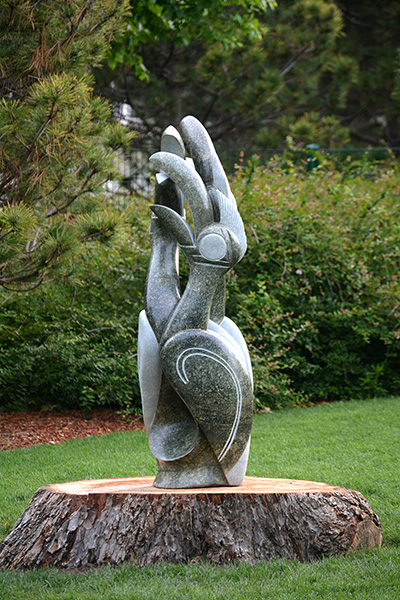 Placed strategically throughout the lushly-landscaped grounds of the Dallas Arboretum and Botanical Garden is a selection of sculptures of African women, birds, safari wildlife and abstracted forms. There are 101 works to be exact,on view through July 31. The show, called ZimSculpt, is unlike previous exhibits at the arboretum. In the last five years, the non-profit organization has been bringing more temporary art exhibitions to its grounds on White Rock Lake, aiming to reach a wider audience.

ZimSculpt is a sampling of perhaps the largest and most extensive collection of Zimbabwean sculpture in the world. Amassing it was no small feat for Vivienne and Joseph Croisette, who have worked for years to build the Zimsculpt company that Vivienne started 17 years ago. The couple trekked through Zimbabwe, recruiting artisans into the fold, and now count nearly 500 in their roster. They have traveled this exhibition all over the world and now it’s made its way to Dallas—the only viewing in the Southern United States “We want to bring in exhibits that are one of a kind. The type of thing that will make you drive across town,” says Terry Lendecker, vice president of advertising and promotions for the Arboretum.

The fact that the work traveled thousands of miles, and the sheer magnitude of the exhibition— the largest ever done in the garden—brings with it a significant “wow” factor. Over 165,000 pounds of stone were transported from Zimbabwe. There are more than 150 Zimbabwean sculptors represented between the works in the exhibition and the 300 works in the marketplace on the arboretum grounds.

Two ZimSculpt artists who traveled to Dallas for the exhibition, Aron Kapembeza and Passmore Mupindiko, sit under tents on opposite ends of the marketplace. For the next several months, they’ll spend their days chipping away at blocks of springstone until figures appear.

Kapembeza specializes in renderings of women in traditional activities of carrying children or baskets from the market. Mupindiko fulfills his love of wildlife with his stone carving of birds—making the native guinea fowl appear from a jagged block of stone and sanding a crane sculpture to an almost unbelievably smooth finish. “I love nature, and these are very good birds—they’re warning birds,” says Mupindiko of the guinea fowl he’s currently working on. 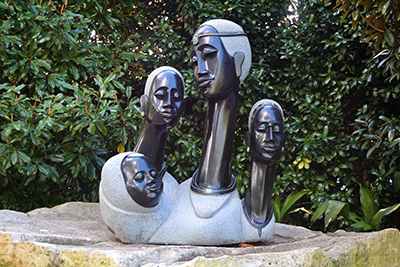 Mupindiko was trained in one of the most well-known and oldest artist communities in Zimbabwe called Tengenenge, which translates to “of the beginning.” The name is quite poetic considering the rock harvested there is literally the beginning of these sculptures that end up in homes, businesses, and institutions around the world.

Mupindiko is a third generation sculptor from the community, who’s now teaching his children the trade. Nearly 80 artists live and work in Tengenenge, and with their families, more than 300 people live in the community, which was started by a Dutch farmer after government sanctions forced his farm to close. “It’s quite rural, which is one of the issues we’re facing in trying to market it. But they love tourists to come in,” says Croisette.

Since most of the stone Mupindiko works with is harvested from Tengenenge, it makes transportation convenient, a luxury considering many of the other Zimbabwean artists in the exhibition have to travel for days to the nearest quarry to fetch their stone.

On the other side of the lawn, Kapembeza works on his sculpture of a woman. He also comes from an art background. His aunt, Collen Madamombe, is one of the most famous women artists in the country according to Croisette, and taught him how to carve stone. Perhaps to pay homage to the woman who taught him his trade, his chosen subject matter are women. “I do respect ladies so much. Back home, ladies work very hard. I think it’s everywhere, not only back home,” he says. “When I get a piece of rock, I think of the lady inside.”

While the the flavor to the exhibition is local, the appeal is worldwide. Apparently Zimbabwe sculpture brings with it a bit of cache—one of the most famous Zimbabwean sculptors, Sylvester Mubayi, who has pieces in the arboretum exhibition, is showing at the Venice Biennale this year. The Museum of Modern Art in New York, Rockefeller Foundation, and Rodin Museum in Paris all have pieces of Zimbabwean sculpture in their collections.

The Croisettes bring international flair to their African art dealings as well. Now settled in Zimbabwe, Joseph is originally from France, and Vivienne is from the United Kingdom. She began her career representing British artists. “I used to vet all of the sculptures coming in and one day somebody turned up with Zimbabwe sculpture. I was so amazed, that I said I’d like to go to Zimbabwe. Three months later I gave [notice] to my job,” she relates.

The arboretum has been bringing in more big name artists for exhibitions within the gardens. Last year they exhibited the bronze sculptor Gary Lee Price and five years ago they showed Dale Chihuly’s glass. The outdoor stone sculptures found a perfect home within the gardens—although they represent native life in Africa, they’re not out of place in Dallas. “We’re trying to cross the cultural divide and bring people in who wouldn’t normally come to a botanical garden,” says Croisette.

“People know about the garden, and they think we’re all about flowers, but there’s so much more,” Lendecker adds. “It’s that extra layer to have a world-renown exhibit in a world-renown garden.”