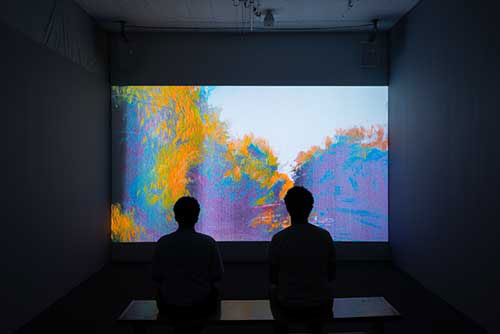 In Invasive Species: Landscapes, currently on view at the Hudson Showroom at Artpace, landscape finds its way into contemporary art. The works on view show the physical landscape, but also the landscape of the mind. They delve into the process of thinking and the thinking of process—the rhythm of observation, interpretation, observation, and reinterpretation that has become so necessary in our socially and technologically networked present.

In the show, the artist that most clearly taps into this rhythm is Joey Fauerso. Her work, Guadalupe—After Images begins with an airboat tour into marshland near San Antonio Bay where she shot significant amounts of video that she would return to in her studio. Using stills from the footage, Fauerso created nearly 200 paintings —fast expressive works hearkening back to the impressionists, but much looser. These works were then scanned and printed through a low quality ink jet printer. This part of the process, depending on ink levels, fundamentally changed the images from the original paintings. A giant grid of these prints is on display at Artpace.

These images were additionally manipulated by placing them back into video sequence. The video is projected in a dark viewing room with a meditative, constant (perhaps motor-like?) sound. What’s left is a heavily processed, but no less real tour through the landscape; one in which the work draws your attention to color, form, and audio, and above all, process rather than individual recognizable elements.

After that calm space, the viewer may be primed to grapple with the implications of Adriana Corral’s memorial-like installation, Per Legem Terrae (By The Law Of The Land). Corral produced a database of 1800 names of women who were violently murdered in Juarez. These names were then transferred directly onto the far wall of the exhibition space. Through the repeated process many names are blurred to the point of being unreadable. Regardless, the collective weight of the names is jarring and easily felt from a distance. After compilation, the original papers listing the names were burnt by the artist, and their ashes make up a large grey rectangle, one half of a large diptych on the floor. The other half is composed of earth taken from the border between Juarez and El Paso, the color of skin.

The earth and ash on the floor directly reference the ashes to ashes, dust to dust religious idea of inevitable death, but the names cannot be removed from their ultra violent connotations. It’s a comment that this saturation of violence is becoming as banal as the landscape itself. Furthermore, this installation does not commemorate the individual victim, but rather the sum of their victimhood, and their re-victimization through our own unwillingness to remember.

As overtly didactic as Corral’s work is (like any memorial, really) the work successfully spells out in concrete terms a new reality, a new proverbial landscape. In Justin Boyd’s video work Two Tracks other elements of that reality are fleshed out in a looser, more atmospheric approach. While less political and certainly less of a call to action than Corral’s work, Boyd’s is equally engaged with ideas of the unseen commonplace and the reluctantly accepted. When working with a recording of a passing train outside his apartment Boyd entered the audio feed into the video input on a display and vice versa. Using the strange digital translation of sound to visual information (streaks of static whipping across the screen) and image as audio information (didgeridoo-like drones) the artist produced a second recording. In Two Tracks, Boyd melds the two creating an abstract synesthetic experience in which you see sound and hear light.

Together the exhibition could be described as two meditation chambers separated by a mausoleum. It’s heavy stuff, but done in a way in which the art’s aesthetic appeal trumps the impulse to escape its transformative character. The show provides a powerful new view of our contemporary landscape where our own invasive imprints on the environment are everywhere and unavoidable.