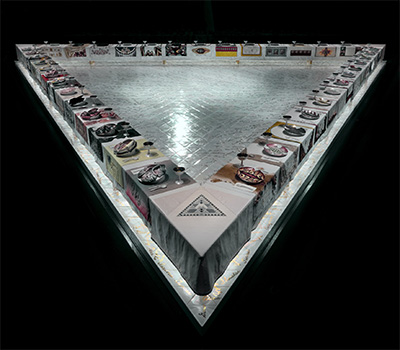 It Happened in Houston: Judy Chicago’s The Dinner Party at UH Clear Lake

Judy Chicago’s monumental installation, The Dinner Party, debuted March 14, 1979, at the San Francisco Museum of Modern Art, the first stop on a planned nine-year tour of the U.S. and abroad. After a successful three-month run, during which it was viewed by more than 90,000 people, the remainder of the tour was cancelled for a variety of reasons, one of which may have been that art critics (mostly male) dismissed it as “craft” due to the ceramics and needlework involved. No doubt they also were shocked by the so-called vulvular imagery of the plates and were also challenged that it was created by a community of women. San Francisco art critic Thomas Albright compared Chicago to Andy Warhol, writing “Both specialize in forms of conceptualized schlock, totally dependent on the aura that the art world provides to distinguish it from objects at a supermarket or crafts bazaar.”

That’s when the University of Houston–Clear Lake came into the picture. Due to the efforts of Houston bookstore owner MaryRoss Taylor and Calvin Cannon, UHCL dean of human sciences and humanities, as well as many of the artist’s supporters, the piece was installed in the university’s Satellite Theatre some 18 miles south of Houston from March 8 to June 1, 1980.
“The Dinner Party drew more people to UHCL than have ever been here before or since—altogether 36,000 people,” said Gretchen Mieszkowski, professor emeritus of literature/women’s studies at UHCL. “It was a major, major event for the Houston arts community and for people interested in art from all over the south and west, and it was greeted with great excitement. I was proud when we brought the installation to UHCL, and I remain proud that it was displayed here.”

Chicago chose an equilateral triangle for The Dinner Party, with the sides signifying equality. Each of the 39 ceramic plates, which are dedicated to a major historical or mythological woman in history, are three-dimensional, 14 inches wide and of various heights. Each arm of the table was devoted to a different period in history; the first side began with the Primordial Goddess and addressed prehistory through the Greco-Roman period. The second side covered the beginnings of Christianity through the Reformation, and the third was the 17th-century through Georgia O’Keeffe, whom Chicago refers to as “the mother of us all.” The china-painted porcelain plates were inspired by the butterfly, Chicago’s symbol of women’s liberation and resurrection. Vaginal, floral, and architectural imagery, as well as pink lace, African masks, and even a piano were used in plates inspired by the women they represent.

Handmade chalices, flatware, and gold-trimmed napkins completed each place setting. They were presented on needlework runners that explored idiosyncratic stitching techniques from the past and present. The needlework crew was the largest in the project, with some 50 volunteers working on them. The table rested on an opalescent porcelain floor bearing the names of 999 additional women hand-painted in gold. The scholarship involved in researching all these women throughout history is impressive, and the 256-page catalog includes their biographies. The table was installed in a dim room with dramatic lighting, prompting one writer to describe it as a “sacred space” and another as a “temple.”

“The first thing I noticed after all the pieces were uncrated was that it wasn’t about the surroundings,” said Nick de Vries, UHCL professor of fine arts (retired). “It wasn’t about the embroidery, it wasn’t about the tiles. It was an installation. It was everything about it.”
Hanging in the entryway to The Dinner Party were six large banners designed by Chicago and woven in the traditional French Aubusson tapestry style. They expressed with words and images the artist’s philosophical creed. There were also two panels of photographs, one with histories of the women artists included in The Dinner Party and the other with photographs of the five-year process of creating the work. Hundreds of women produced the piece over a five-year period at a reputed cost of $200,000.

How did The Dinner Party end up in Clear Lake City?

Feminist bookseller MaryRoss Taylor operated a store called simply The Bookstore in Houston from 1973 to 1983. Her shop opening coincided with the publication of Chicago’s autobiography Through the Flower. According to Taylor, she noticed that women who were not artists were buying the book, so she read it and admired Chicago’s story and her mission to bring women’s achievements to light. Sometime later, Doubleday sales representative Evelyn Rochell Hubbard heard Chicago speak at a sales conference about The Dinner Party, which was being completed for the SFMoMA show. Doubleday was publishing books by Chicago about the piece and Hubbard told Taylor, “We need to get this art to Houston. It would be the perfect follow-up to the International Women’s Year conference …. You know the art people; see what you can do.” The minute Hubbard left The Bookstore, Taylor called Los Angeles information and got the number for The Dinner Party studio. She asked the person who answered if she would be interested in having the piece come to Houston. “I didn’t know until last year that Judy herself answered the phone,” Taylor said.

That call launched an 18-month effort to bring The Dinner Party to Houston. To transport the piece, install it, and provide security was going to be expensive, so they formed a committee and got creative. The Bookstore became a community base for sharing information, brainstorming related programs, and fundraising. Taylor approached various art venues that could accommodate the large piece, but everyone said no. Volunteers talked to women’s and civic groups, and project administrator Diane Gelon came from L.A. to speak at the Glassell School. Finally the late Rema Lou Brown invited UHCL Dean Cannon to a program about The Dinner Party. After consulting with UH Chancellor Alfred Neumann and other officials, he agreed to the project. Taylor and Cannon worked together from that point on, writing grant proposals in the name of both UHCL and the former’s nonprofit, TACO (Texas Arts & Cultural Organization). There was a small admission charge of $2.50 for the general public and $1 for students. The committee sought sponsors for the plates ($500 each) and the 999 names on the floors ($10 each). There was an exhibition catalog for sale, as well as posters and related items. It was also funded in part by the National Endowment for the Arts, the Women’s Fund, N.O.W., and Chicago’s nonprofit, Through the Flower Corp.

Numerous community events surrounded the opening of The Dinner Party, including a series of symposia with subjects like “Sexuality or Iconography: The Dinner Party Plates” and “Art as a Vehicle for Social Change.” There was an exhibition by the Women’s Caucus for Art, Houston Chapter; a quilting demonstration and exhibit; two related gallery shows in Houston; and the world premiere of the film “Right Out of History” by Johanna Demetrakas. There was even a box supper auction with boxes decorated to represent 50 Texas women not well-known in history.

“As a feminist activist, my goal was to make changes in Houston through the presence of the exhibition,” said Taylor. “I think we succeeded pretty well at that goal, but Houston made a much bigger mark by becoming the model for The Dinner Party tour, using a variety of women’s organizations—from existing museum support groups to ad hoc coalitions formed to bring the art.” Chicago’s team worked with community groups in Boston, Chicago, Cleveland, and Atlanta to organize showings outside of traditional museums. The piece went on tour for nine years and was seen by roughly one million people at 16 exhibitions across six countries. The Brooklyn Museum, which showed it from 1980 to 1981, was the only art museum to show it other than SFMMA. Jane Gerhard’s book, The Dinner Party: Judy Chicago and the Power of Popular Feminism, 1970-2007 documents much of how the tour was realized.

Taylor ended up working with Judy Chicago full time from 1983 to 1990 as the executive director of Through the Flower Corp. After that, she became the director of the Lawndale Art and Performance Center (1991 to 1997). Unfortunately, Cannon lost his job as dean in the midst of fundraising for The Dinner Party. According to the Houston Post, the administration maintained that Cannon mishandled donations and was demoted to director of special events. He left the university at the end of the semester.

In 1988, The Dinner Party went into storage, where it remained until 2002. Chicago, who was 39 at the time of the UHCL exhibition, would have been distressed had she known that by the time The Dinner Party found a permanent home, she would be 68 years old. Eventually, philanthropist Elizabeth Sackler acquired the work and donated it to the Brooklyn Museum. In 2007, the Elizabeth A. Sackler Center for Feminist Art was established with The Dinner Party as its foundation, thanks to the Elizabeth A. Sackler Foundation. A permanent exhibition space was constructed at the Brooklyn Museum, and in March 2007 the installation opened to the public. According to the museum, it is “one of the most important artworks of the 20th-century and one of the most popular in our collection” and “upon its public debut in 1979, it immediately became an icon of feminist art.”

Subsequently, back in Texas, the Department of Women’s Studies at UHCL presented Setting the Table: Preparing Judy Chicago’s The Dinner Party in honor of the 30th anniversary of the UHCL show. It was organized by ACA Galleries in New York and ran Feb. 25 through April 30, 2011.

In 2017, the Brooklyn Museum opened Roots of The Dinner Party: History in the Making (Oct. 20, 2017–March 4, 2018), the first museum show to examine the creative process behind the work. Included were rarely seen test plates, research documents, ephemera, notebooks, and preparatory drawings from 1971 through 1979, including research cards that Chicago’s team assembled on 3,000 notable women. According to the Brooklyn Museum’s website, “Chicago’s ambitious research project combatted the absence of women from mainstream historical narratives and blazed the trail for feminist art historical methodologies in an era of social change. It also validated mediums traditionally considered the domain of women and domestic labor, as the artist studied and experimented with China painting, porcelain, and needlework.”
In collaboration with Prospect New York, which produces homewares and accessories in partnership with artists, Chicago has adapted four of the plates from The Dinner Party into two-dimensional versions that will be sold in editioned sets. Rounding out the collection are two pillows and a scarf pulled from the banners and table runners, as well as a puzzle based on the installation’s floor.

Chicago is having something of a renaissance, having made Time magazine’s list of “100 Most Influential People” last year. The Institute of Contemporary Art Miami is hosting Judy Chicago: A Reckoning with six bodies of work from the artist’s wide-ranging career, through April. 21, 2019, during Art Basel Miami. At the time of the creation of The Dinner Party, Chicago lived in Santa Monica, Calif. She now lives in Belen, N.M., 100 miles south of Santa Fe, in a converted hotel with her husband, Donald Woodson, a photographer.