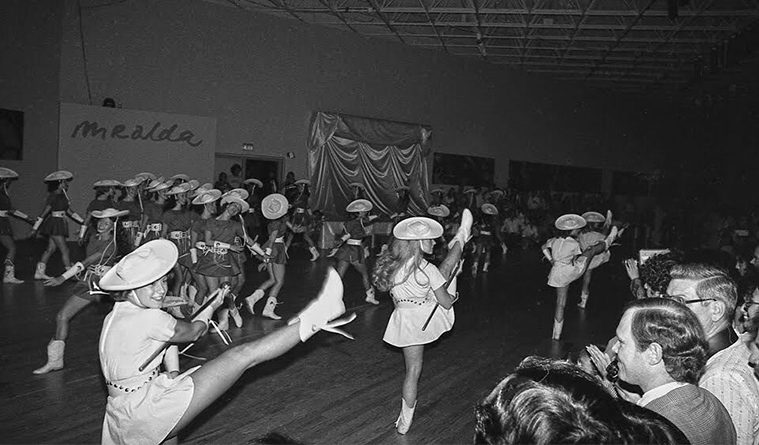 It Happened in Texas: Antoni Miralda, the Kilgore Rangerettes and Flying Bread at the CAMH 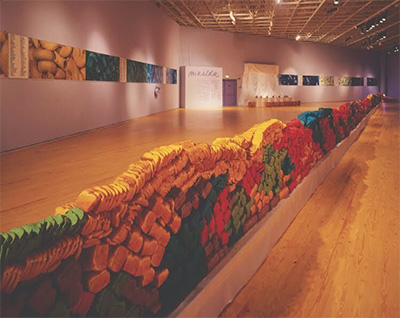 Jim Harithas was the maverick director of the Contemporary Arts Museum Houston from 1974 to 1978.   Hired away from the Everson Museum of Art in Syracuse, he arrived at the corner of Montrose and Bissonnet to find an impoverished museum with a rag-tag staff that had just spent about everything it had on its expensive new corrugated metal building. In no time, Harithas was criss-crossing the state in his truck, seeking out artists wherever they could be found. He immediately launched a series of exhibitions that would in almost all cases be the first museum show in Houston for some of Texas’ finest artistic talents: James Surls, John Alexander, Luis Jimenez, Terry Allen, Jim Roche, Richard Stout, Hannah Stewart, Forrest Prince, Mel Casas, and Lynn Randolph. He even took a chance on a persistent University of Houston graduate out of Brownsville named Julian Schnabel. The shows were inexpensive to mount and their local focus helped to develop an art community in Houston that was not just viable, but dynamic. Harithas felt that what he found in Texas was every bit as good as what he’d seen in New York.

A devastating flash flood in June 1976 inundated the museum’s lower gallery and destroyed the building’s infrastructure; Harithas and Alexander donned scuba gear to try to rescue hundreds of thousands of dollars’ worth of waterlogged art. Thanks to a successful benefit auction, the museum bounced back, and in 1977 Harithas rebuilt momentum with a retrospective of the works of New York-based sculptor Salvatore Scarpitta; a groundbreaking exhibition of contemporary Chicano artists from Texas called Dale Gas; and an exhibition conceived by the Spanish interdisciplinary artist Antoni Miralda.

Miralda was internationally-known for his installations linking food, energy, and power. For the show at the CAM, he hung color photographs of brightly hued macaroni, labeled huge mounds of salt and sugar with garishly flashing neon signs, and showed videos by Rita Gardner, a twenty-seven-year-old redhead who Harithas had recently hired as the CAM’s1 new video curator. They presented views of food being prepared and eaten in restaurants from around Houston, including Ballatori’s, Hilltop Herb Farm, Shanghai East, Las Cazuelas, Foulard’s, and Baskin-Robbins, displayed on monitors surrounded by elaborate place settings—complete with wine glasses wired like headphones so that museum goers could lift them to their ears and listen to music while they watched. Guests could browse an adjoining trophy room honoring the high-kicking Kilgore Rangerettes drill team, stocked with cowboy hats, boots, toy pistols, and of course, photographs of the comely dancers. On opening night, the Rangerettes were there in the flesh, bused in from Kilgore College and looking curiously at a display of fish-themed pieces by the contemporary artist Marisol Escobar in the downstairs gallery as they waited patiently for direction from Miralda. 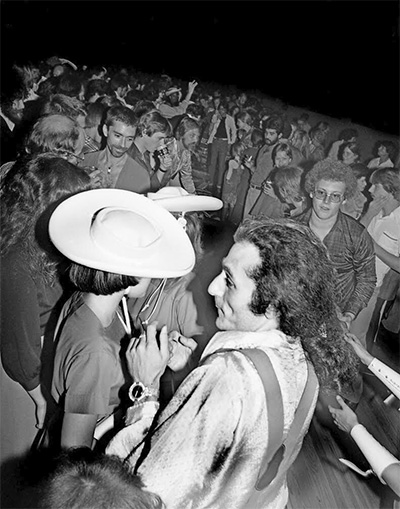 Antoni Miralda with Rangerettes and crowd. Photo by Tony Johnson.

At 8:00 p.m., dressed in suspenders and cowboy boots, Miralda clapped his hands and shouted “Vamanos!” In a shuffle of satin and pom poms, the Rangerettes made their way up the stairs and strutted into the main space, decked out in red, white, and blue cowboy hats, vests, and boots, to perform a trio of greatest hits—their high kick, red cape, and blue box numbers. An intermission ended with a last-minute pep talk by their leader (and founding Rangerette) Gussie Nell Davis, dressed in a melon-colored double-knit pantsuit. “Everybody kick as good as you can,” she urged, “but kick without falling on your fannies.”

At 9:30, the sixty-five teenaged Rangerettes again marched up the stairs and into the main gallery space, stepping diagonally across the gallery floor, along the way stacking four thousand loaves of bread dyed with food coloring on a 175-foot row of benches bisecting the exhibition space. Trays of brightly colored dips circulated throughout the audience, and by 10, dainty nibbling had given way to the playful tossing of slices of the rainbow-hued bread. “It could have been a Holy Week procession in a Spanish village,” observed Charlotte Moser in the Houston Chronicle, “and with only red wine free to the guests, Miralda’s reference to communion bread and wine was obvious.”

The air conditioning gave out early in the evening, and the temperature rose in the crowded room. More wine was consumed. Then things went too far. As Surls looked out across the room, he noticed Jamie Jones, a notorious troublemaker from the St. Thomas art crowd, handling one of the loaves like a football. Surls said to himself, “Oh my God, he’s gonna throw that.”

“He just flung it,” Surls remembers. “I don’t think he really threw it intending to hit anyone, but he did.” The loaf sailed through the air and knocked a six-year-old girl off her feet. John Alexander saw it happen and, according to Surls, “went all snake eyes.” He angrily confronted Jones, and finding him belligerent and unapologetic, dragged him through the back entrance to slug it out while a mob of people surged toward the door to watch. “Some people thought I overreacted,” says Alexander sheepishly, “and maybe I did. But it cost a fortune to make all this bread, Miralda’s show was ruined, this little girl was crying, and it certainly wasn’t unprovoked. I really beat him up pretty good.”

Meanwhile, inside the gallery the scene quickly escalated to a full-scale, Texas-sized donnybrook, with flying bread and flying fists. Surls and the CAM’s board president Marilyn Lubetkin both vividly remember the participation of a group of leather-clad gay men who were clearly new to the museum. They eagerly entered the fray; perhaps they thought this happened at the CAM all the time. Harithas’s videographer Andy Mann had been filming the event, and he dropped his camera long enough to throw a few punches. The cashier at the bar was held up at gunpoint during the melee, and the stickup artists left with the cash box. 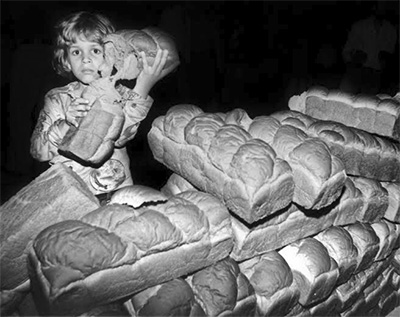 “Now, some people say that those sixty-five girls, moving and wiggling, changed the smell in the room and made people crazy,” chortles Harithas, clearly relishing the memory. “Texans in those days loved to fight. If you went to a bar, there was a fight. That’s just what happened. And I thought, goddamn it, no museum in the world ever had a fight like this.” Alexander is much less sanguine, recalling “a terrible, awful, ugly scene.” Whatever the case, by 10:15, Harithas and Lubetkin had cleared the gallery (“and mopped up the blood,” Harithas adds). Alexander disappeared to his Montrose studio, the Rangerettes changed back into their blue denim traveling outfits, and the police arrived to disperse the crowd outside. Miralda was in ecstasy, and Harithas took him out to Gilley’s to unwind.

The next day, the Post’s Mimi Crossley attempted to sort out the aftermath. “Who is making fun of whom?” she asked. “What’s the intent here? When does good fun stop and elitist satire begin? What’s left to see is a long pile of gamey-smelling bread, a happening played out in an overlarge space that seems vaguely menacing in semi-emptiness.”1 Writing in the Chronicle, Charlotte Moser had questions of her own. “Does throwing an outrageous and bizarre party, turning cultural characteristics into stereotyped social data, and stretching for long-shot meaning really do anything for art or, for that matter, Houston’s appreciation of it?” She suspected that the crowd had been duped into carrying out Miralda’s plan, albeit “with a few ad-libs of their own thrown in.”

“Miralda’s script was a familiar one,” she continued, “but one not often adapted to art. It was the script of the pep rally, the political convention, and the rock concert. It was based on providing enough visual and group stimuli to heighten the tempo of the crowd until it exploded into some form of physical behavior, often violent. At the CAM it resulted in cool museum goers pummeling each other with purple bread.”Surls sees a distinct strategy in the division of the gallery with the long wall of bread. “Anytime you’ve got a barrier like that,” he says, “you’ve got a this side and a that side. It’s two sides. Factions develop. It’s psychology 101. And then you add the Rangerettes? What are they for? Their job is to whip people into a frenzy. It’s impressive enough seeing them on a football field. You put them inside a building, right up next to people? Come on. Miralda and Jim knew what they were doing.” 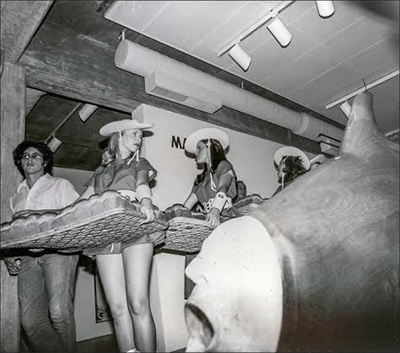 Kilgore Rangerettes prepare to deliver trays of bread to to the CAM’s upper gallery. Photo by Tony Johnson.

Sure, Surls, Harithas, and Miralda were delighted, and John Alexander was willing to throw a couple of punches when the situation called for it. However, members of the CAM’s board groaned. It didn’t help that a bread shortage hit Houston the following week. Never mind the fact that the loaves were being rotated out daily and offered to the city’s homeless, Crossley observed that the “art works that were supposed to satirize high art suddenly looked elitist and ‘let them eat cake.’” To make things worse, the video artist Rita Gardner was killed in a head-on automobile accident outside of Austin a few days later, her video work in the Miralda show suddenly transformed into a haunting elegy. “That was devastating,” recalls Paul Schimmel, who got his start in Houston as Harithas’s curatorial apprentice before moving on to become one of the art world’s most influential curators. “I think it was at that point that I began to think about finishing up [in Houston] and getting on to graduate school.”

This article is adapted from Pete Gershon’s Collision: The Contemporary Art Scene in Houston, 1972 – 1985 to be published this fall by Texas A&M University Press.