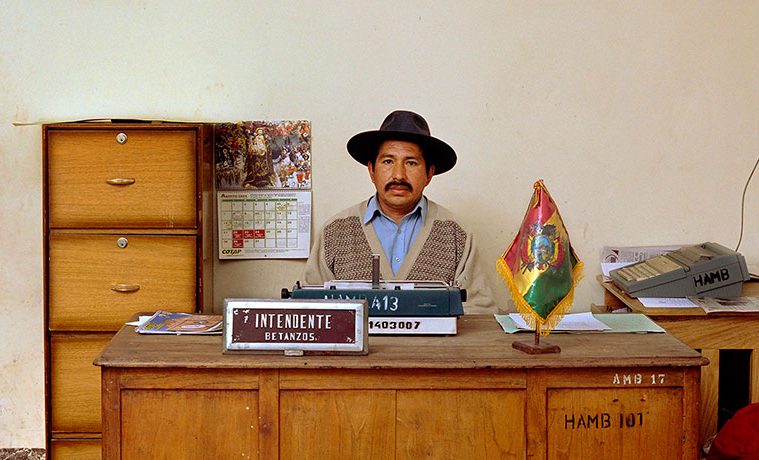 Documentary photographer Jan Banning’s current exhibition at the Museum of Fine Arts, Houston began with an assignment on the decentralization of Dutch aid in Mozambique. It was not a topic readily suited to photography, and Banning was forced to question what a bureaucracy was, and if an image of its inner workings could be made compelling. Years later, we have Banning’s response. In his body of work Bureaucratics, it is the bureaucrats themselves who come to the fore.

For each photograph, Banning and reporter Will Tinnemans wandered the corridors of town halls and government offices, popping in unannounced on local officials. Tinnemans would begin interviewing the subject, with Banning quickly setting up his camera and snapping a photo. Banning took each photograph from the perspective of a citizen entering the office, dead center from the entryway and angled slightly downwards. 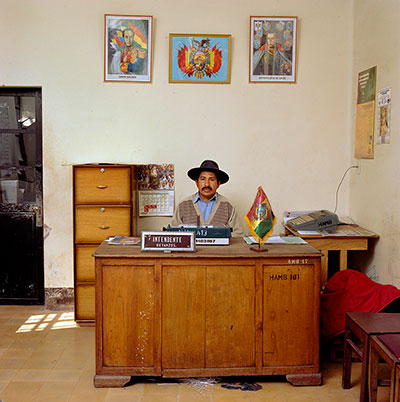 Bolivia-09 [Bet., MCC (b. 1951)] portrays a government official against a blue wall with images of leaders past and present scattered across it. Russia-29 [She., YLB (b. 1976)] shows an office that looks like it could have been former hotel room, with fan-patterned wallpaper, lace curtains and a massive safe behind the desk. Each photograph is filled with details that seem to uncover individuality behind the label of “bureaucrat.” The text accompanying the show even suggests that the images be read like a portrait, with details like uniforms and magnets a telling statement about the subject in question.

Banning’s images attempt to humanize the negative connotations of regulations and procedures nearly synonymous with bureaucracy. And within the project of Bureaucratics, we are encouraged to see their subjects as individuals, not mere representatives of government. 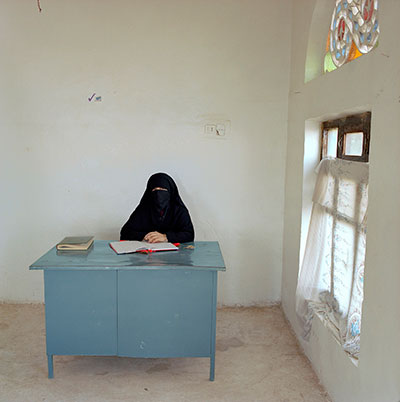 And yet, Banning’s conceptual approach makes the photographs disconcertingly repetitive. Framing each image in exactly the same format creates an equalizing effect that suggests bureaucracies and a citizen’s experience of them are the same everywhere—a negligent oversimplification. Bureaucrats are frequently perceived as separate from ideology, and to promulgate this idea of feckless people buried in paper as the literal face of government is troubling.  Bureaucrats don’t enact laws, but they do actualize them at the local level. This exhibition loses sight of that bigger picture.

Despite the shortcomings of Bureaucratics, each image remains gripping on its own terms. Thankfully, this set of photographs has been gifted to the MFAH, and I hope to see a few of the works resurface in the context of another, more insightful, exhibition.