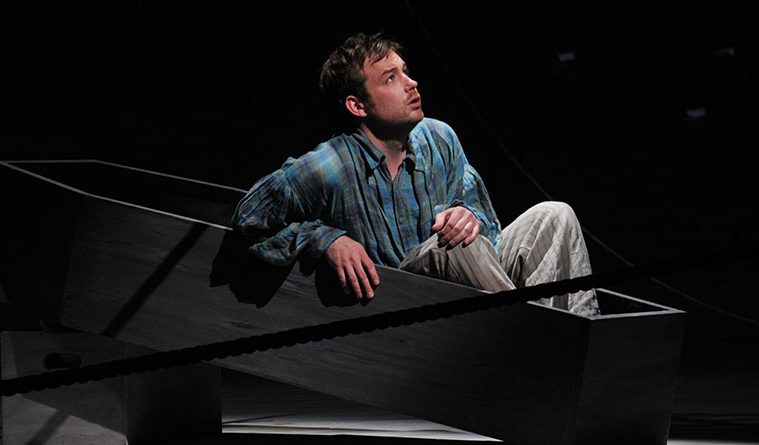 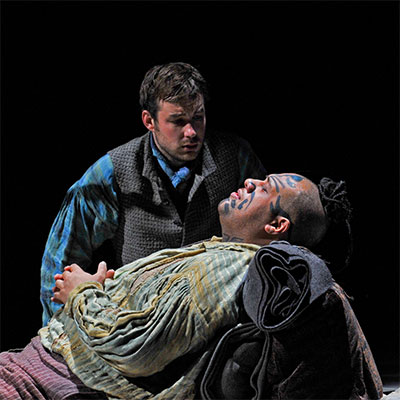 Stephen Costello thinks back to when he agreed to perform in a then-unfinished opera. Despite all the effort that goes into creating and staging new works, many have disappeared after their premieres. How much mileage, tenor Costello wondered, would he get out of this one?

The first sign came when he sang through composer Jake Heggie’s score. “What he wrote was damn good—and vocally fantastic,” Costello said. “The way he approached everything was really good for the voice. And the same thing with the text: It was perfect.”

The music and text had a lot to live up to: Heggie and librettist Gene Scheer had made an opera of Melville’s Moby-Dick. Since Dallas Opera premiered it in 2010, this intense and haunting adaptation of Herman Melville’s seafaring saga has established itself in the opera house. Playing Greenhorn, the only crewman who survives Captain Ahab’s Cetological obsession, Costello has traveled with Moby-Dick to San Francisco, where it was filmed for a 2013 PBS telecast, and Washington, D.C. The voyage comes full circle Nov. 4, when the whaling ship Pequod and its crew return to the Winspear Opera House—again as incarnated in the eerie, towering multimedia production by director Leonard Foglia and designer Robert Brill.

A couple of changes since last time: Texas native and Wagner heavyweight Jay Hunter Morris, who played Ahab in the Great Performances telecast, will introduce Dallas to his biting portrayal of the seafaring captain, and Dallas Opera music director Emmanuel Villaume will conduct. Baritone Morgan Smith returns as Starbuck, the first mate tempted to kill Ahab, and Costello reprises a role in which his freshness and commitment have won acclaim.

Costello’s Greenhorn opens and closes the opera, and he undergoes his own personal journey amid Ahab’s hell-bent quest. His Act 2 soliloquy, accompanied by little more than oboe, offers a poignant moment of reflection before the last, catastrophic attack on Moby-Dick. “It’s a character I love doing,” Costello said. “He’s either going to survive on this boat or he’s going to die at sea. He feels that he has nothing left. Through the arc of the story, he discovers friendship. He watches everyone else and how they handle life. I think he becomes a complete person by the end of the opera.”

Moby-Dick requires its cast to go above and beyond opera’s usual call of duty. Costello and others sometimes have to sing as they’re perched 15 feet above the stage on the Pequod’s masts. “It’s a little weird,” Costello said. “When you’re singing onstage, you have the stage underneath you—your legs underneath you. When you’re on these mastheads, you don’t have that. You’re trying to hold yourself up. I find myself extremely exhausted after a run of Moby-Dick. It’s a long role, and there’s a lot of running around and climbing. If you’re out of shape, it’s a real killer.” 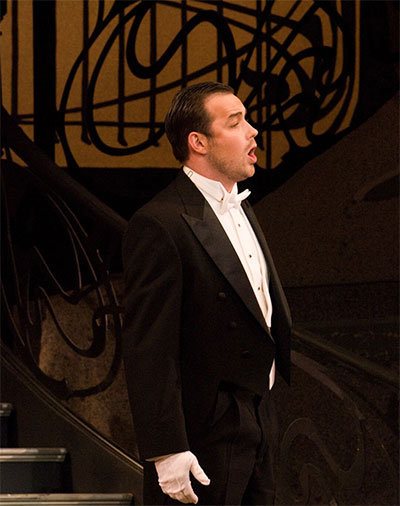 Costello spoke by phone between performances of Charles Gounod’s Romeo et Juliette at Santa Fe Opera, where the Wall Street Journal’s critic hailed him as “a stunning Romeo, his tenor beautifully poised and free.” But he couldn’t just bask in praise. Some of Costello’s down time had to go toward preparing for his other Dallas Opera assignment: helping open the company’s season Oct. 28 with his first portrayal of Lensky, the ill-fated poet in Tchaikovsky’s Eugene Onegin.

“The music is incredibly beautiful,” Costello said. But Lensky has demanded even more work than most new parts, because this is Costello’s first role in Russian—a language he doesn’t speak. Before starting to learn the music, he tackled the words, drafting a Russian-speaking friend to help him pronounce them.

“When I was in school, I had a Russian coach, but I only did two pieces, an aria and a duet. I didn’t get to sing an entire role,” Costello said. “So this is like starting from the beginning. It’s a beautiful language to sing in. I like the vowels and the way it feels when you’re singing it. It feels good in your mouth. Comfortable.”

Lensky is the latest in a series of roles—including the Duke of Mantua in Verdi’s Rigoletto—that Costello has added to his repertoire at Dallas Opera’s invitation, beginning when his career was young. He credits former artistic director Jonathan Pell, who “heard me and took a chance on me. Jonathan has done a lot of good work bringing great talent to the Dallas Opera,” Costello said. “He has a great ear for finding talent. Some people have it, some people don’t. … And he’s supportive of the people he hires.”

Top opera companies across the United States and Europe call on Costello to play leading roles. Next spring, he’ll be Romeo in a new production of Gounod’s drama at New York’s Metropolitan Opera. Sometimes, though, Costello keeps his singing in shape by going back to his musical starting point: the trumpet, which he studied for eight years as a youngster before his voice took precedence. “When you’re playing the trumpet, you can’t not breathe correctly,” Costello says. “So when I feel like I’m doing weird things breathing-wise, I’ll pick up my trumpet and start playing again. It helps.”