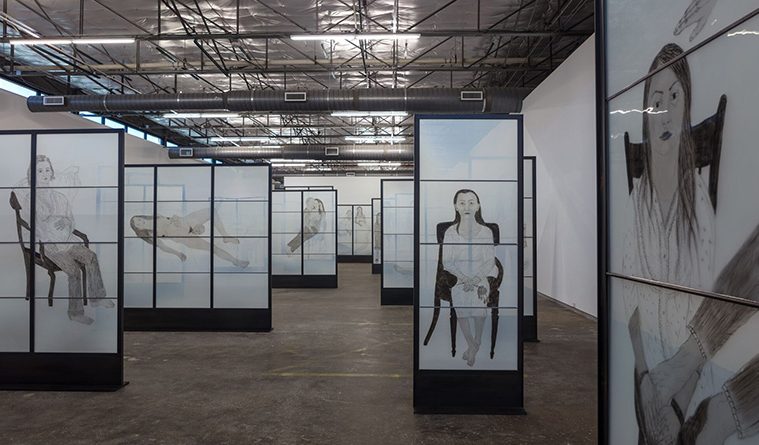 Mortal, an exhibition of work by Kiki Smith at the Dallas Contemporary, on view through Dec. 17, spans the last 10 years of the artist’s output and includes the installation of Pilgrim, a set of thirty industrial steel windowpanes of mouth-blown stained glass. This massive collection has rarely been seen together due to space constraints, a problem easily surmountable by the Contemporary’s ample size.

World renowned, New York-based Smith commands a mastery of disciplines that range from drawing, painting, photography, printmaking, sculpture, and textile art, exploring themes not limited to gender studies, sexuality, mortality, bio-politics, and feminism. The daughter of the geometric artist Tony Smith, she came of age during a time when abstraction was in vogue only to reject those currents by privileging representation. She has been credited with the return of the figure to contemporary art as a viable subject, filtered through her Catholic upbringing and inspired by the then current AIDS crisis that resulted in the loss of several of her friends, including her sister Bebe Smith, an underground performance artist.

The loss of her father and sister, and more recently her mother, led Smith toward investigations of mortality, loss, and rebirth, themes that inform Pilgrim. In this installation, Smith hand-painted the slightly opaque glass panel surfaces with an emphasis on line. The installation suggests intimacy, like looking through a window into someone’s home and observing the passing of everyday life.

Smith’s rendering style is simple and detailed; the images are almost flat, like black and white film animation, and can be seen from the front and back, as well as through the glass itself, making visible the succeeding pieces installed in the space. They depict several different women and their similar life experiences, moments in a woman’s life cycle: a young girl sitting, standing holding a light bulb, pregnant, giving birth, with the child or children, aging, and death. These images quietly build through repetition and sequencing, taking the viewer on a meditative journey through emotions such as the joy of starting a family, the innocence of childhood, and the feeling of loss when a parent dies.

In a second gallery are the remaining twelve pieces drawn from several completely different bodies of work. Of note is Mortal, a set of twelve woodcut prints that ruminate on the passing of Smith’s mother. They feature delicately rendered symbols like a set of crosses hanging from a chain or a hospital wristband. These are placed around the head, arms, and torso of her mother as if to memorialize her final days.

Although all of the pieces were executed recently in Smith’s career, a clear thematic line traces all the way back to where the artist began, revealing a consistent grappling with the human condition. This is evidenced in Pilgrim where she uses images of women to depict the cycle of life in all its joy, pain, and loss, as well as in the woodcut prints in Mortal. Additionally, a set of six etchings titled Touch advance a metaphor treating the human life cycle, transience, and the passing of time as expressed through withering flowers such as hyacinth, gladiola, and lilies. Also drawn from nature, the ink on paper series Blue Rain depicts gentle blue raindrops over a manila background. These are lighter and more whimsical in tone when compared to Touch, and still capture blue emotional states and the transience of life.