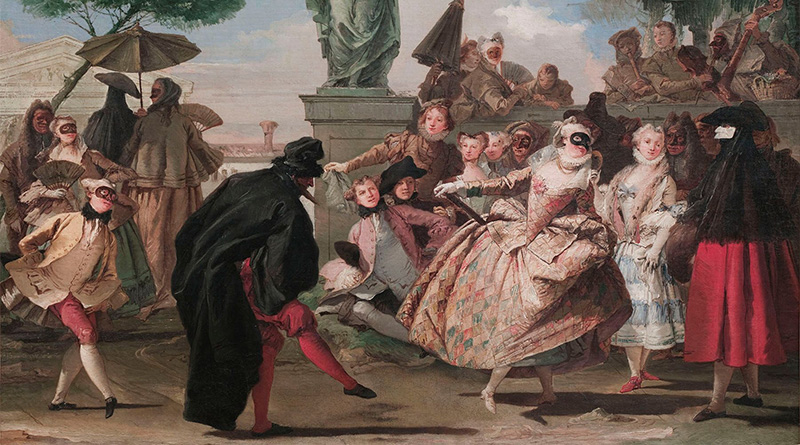 Audiences rarely flock to exhibitions about 18th century European art with the enthusiasm shown for Impressionism and ancient Egypt, but the Kimbell Art Museum is hoping Casanova: The Seduction of Europe, on view Aug. 27 through Dec. 31, will change that. Kimbell senior deputy director George Shackelford took a break from installing the show—co-organized with the Fine Arts Museums of San Francisco and the Museum of Fine Arts, Boston—to chat with Devon Britt-Darby.

Even Casanova’s Wikipedia entry is complicated beyond belief. What a life!

GEORGE SHACKELFORD:  The nature of his amazing life is why my colleague C.D. Dickerson, who’s now head of sculpture and decorative arts at the National Gallery of Art, got this notion, after reading Casanova’s memoir over a summer vacation, that Casanova would be the ideal personality around which to structure a really exploratory exhibition around the art of the 18th century, which we think is really hard to get people to focus on.

Casanova’s the hook, but he’s an appropriate hook, because he did know Madame de Pompadour; he did know George III; he did know the pope; he did know Catherine the Great; and so, you’re not forcing it. He did go to fancy dinner parties; he did screw around; and he did get thrown in prison.

He could have made the Dos Equis commercials.

Absolutely. You know, the problem is he wasn’t so good-looking, but he was apparently an incredible charmer and, I suppose, a great craftsman in the bed.

He had a sense of avocation about it, didn’t he?

No, no, no, no. You know, he’s born in Venice in the 1720s and his mother’s an actress; she goes off to Dresden and leaves him and puts him in a school. He gets out; he has a law degree at age 16, but he never practices law. He thinks of becoming a preacher for a while, but he never sticks with anything for very long except the lovemaking, which is the constant through-line.

But imagine, in 18th century Europe he logged 14,000 miles of travel, so he really was a mover. So he goes all the way to Constantinople, which is not so far from Venice, but he goes to St. Petersburg and comes back through Poland and through Dresden. He stays for a while in Dresden, and then he’s back down to Venice and then ends up in Bohemia, in kind of a sad way, as the hermit librarian to a minor nobleman. But that gives him the library in which to write this amazing memoir.

Is the exhibition structured biographically?

It’s roughly biographical, though not stupidly so. The first two galleries are about Venice, with a grand gallery of views by Canaletto to start, and a gallery with four Tiepolos about the grandeur of the Venetian interior and the grandness life in Venice. We’ve got a gallery of paintings by artists like Fragonard, Boucher and others that are about lovemaking.

Then there’s a gallery devoted to the notion of the troublemaker. We show paintings by Pietro Longhi about alchemists and a fortune teller and a friar swooning over the cleavage of the lady he’s looking at.

Then there’s the first of three tableaus that we’re doing of mannequins wearing 18th century costumes from the Museum of Fine Arts, Boston’s collection. They’re not just standing there; they’re posed in little tiny dramas—in this case, we see the visitor to a girl who’s living in a convent for her protection. She’s not taking religious orders, but she’s been sent off to the convent school to keep her safe, and this man is coming to visit her there. She’s on the other side of a grate, but he’s passing her a ribbon through the opening.

And then the troublemaker, you have him in prison represented by six fantastic impressions of the Piranesi prisons.

He escapes from there, and then he goes to Paris. So the central gallery, the biggest single room in the exhibition, is this very red gallery about Paris, with fantastic 18th century French furniture, our big cycle of Boucher paintings, and a tableau of things like toilette sets and snuff boxes and fans and a men’s silver shaving set. And we have a tableau within that of a woman, very fancily dressed sort of à la Boucher, making herself up while her suitor passes a note to her maid.

All of these tableaus have as their backdrop, not some stage set—we wanted something very, very abstract, because you can’t try to do something that doesn’t go with the Kahn building—but these 18th century engravings that we’ve blown up to life size, basically. So it’s like a room in a house as engraved by an 18th century artist and printed in gray on beige—the Kahn colors. So it’s very abstracted and flat—very severe but, I hope, very suggestive.