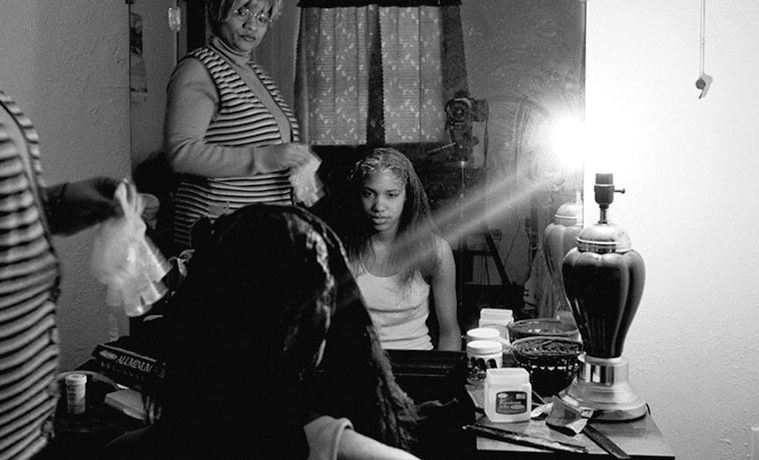 “Welcome to Historic Braddock, store ” a black-and-white photograph greets visitors near the title wall to the Contemporary Arts Museum Houston exhibition, there LaToya Ruby Frazier: WITNESS. The gelatin silver print presents a straightforward, close-up view of the friendly advertisement printed on what appears to be the temporary wooden fencing one might see surrounding a construction site or abandoned property. The bold lettering stands out against a black background, and hovers over the white silhouette of a skyline – Braddock’s, one would assume.

Below the salutation, the photographed sign continues: “Compliments of Air-Scent International, Surco Products, Pestco Incorporated Pest Control.” Muddying the proverbial (and literal) waters of “Historic Braddock,” this subtext reveals a more loaded picture of the town on view – one that suggests polluted air and infestation. 1980s Welcome to Braddock Signage and a Lightbulb (2009) ushers viewers into LaToya Ruby Frazier’s socially-activist work, and announces its primary subject – the artist’s home town of Braddock, Pa. and its history of rise and rapid, perpetual decline.

The Rust Belt town of Braddock is a suburb of Pittsburgh, located in Allegheny County just upstream from the mouth of the Monongahela River. As the birthplace of Andrew Carnegie’s first steel mill (1872) and public library (1888), Braddock thrived in the first half of the twentieth century. However, as is the case for many US cities whose economic stability was dependent on industrial manufacture – Detroit being a prime example – the collapse of the steel industry in the early 1980s resulted in an ongoing period of postindustrial urban deterioration, severe economic depression, and concomitant social and environmental degradation.

Frazier documents such decline with candor and familiarity in the photographs and digital videos that inhabit the basement galleries at the CAMH. Frank in its frontal format and matter-of-fact in its subject, Home on Braddock Avenue (2007) portrays the façade – or rather the lack thereof – of a dilapidated brick building. Ravaged by time and in total disrepair, the structure is collapsing, its innards spilling onto the narrow sidewalk. The photograph is nonchalant and almost mundane, but arresting in its immediacy.

U.P.M.C. Braddock Hospital and Holland Avenue Parking Lot (2011) shows a similarly stark view of an abandoned and ruined building – the Braddock Hospital. As the wall label informs, despite the fact that the hospital provided health care to residents (including the artist’s family) suffering from exposure to environmental toxins released by the steel mills and was the town’s largest employer, the hospital closed its doors in January 2010 and was subsequently demolished. As in Home on Braddock Avenue, parts of the hospital’s exterior are gone, revealing a frail skeleton of I-beams and crumbling sheetrock. A large portion of the building has been razed, causing the roofline to visually merge with the barren landscape in the background.

Frazier addresses the interwoven relationship between people and the environment in which they live in her overtly political-is-personal documentary practice. Her images link the disintegration of the Braddock cityscape with the deterioration of the human body – namely, her own, her mom’s, and her grandma Ruby’s, all of whom feature prominently in the work on view.

While this connection is made clear in the text that accompanies much of the work, it is most apparent visually in two diptychs: the photograph Landscape of the Body (Epilepsy Test) (2011) and the video Self-Portrait (United States Steel) (2010). The former shows a hospital patient on the left and the rubble of Braddock’s decimated medical center on the right. Body and building are equally vulnerable: the patient is photographed from behind, her hospital gown open to expose her bare back and butt crack. She is hooked up to a tangle of wires that is echoed in the image of the demolished building, which has been reduced to nothing more than a web of twisted metal.

Hung next to the diptych is the video, in which Frazier records herself on the left side of the frame, standing topless in front of a thin, floral curtain and staring directly at the camera. Appearing tired and listless, every few seconds she takes a deep, labored breath. Meanwhile, on the right side of the video thick clouds of smoke steadily billow from industrial chimneys. The message Frazier communicates through this juxtaposition is explicit – Braddock’s history of steel manufacturing has taken a toll on its citizens’ health.

Frazier’s work is in dialogue with this artistic history, but rather than depicting a romanticized, sensationalist, or voyeuristic view of socio-economic decline, she presents an intimate and quiet body of work that speaks to personal loss and pictures the effects of deindustrialization on her own family and community. LaToya Ruby Frazier: WITNESS welcomes viewers to Historic Braddock – to its deterioration, its people, and their bedrooms – but the town’s future remains unclear.