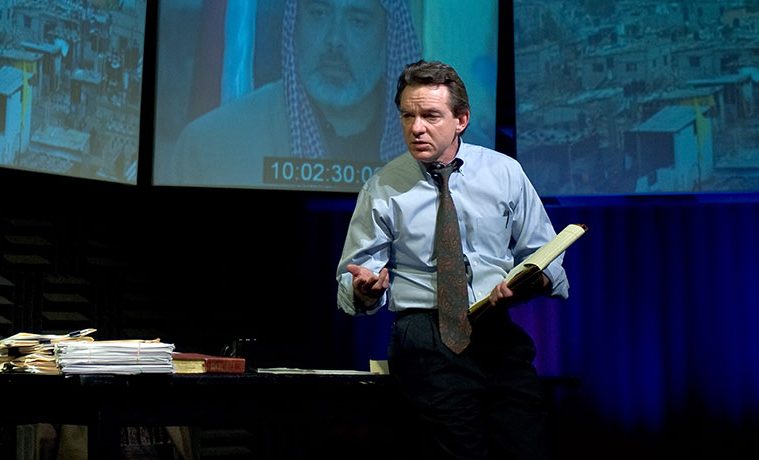 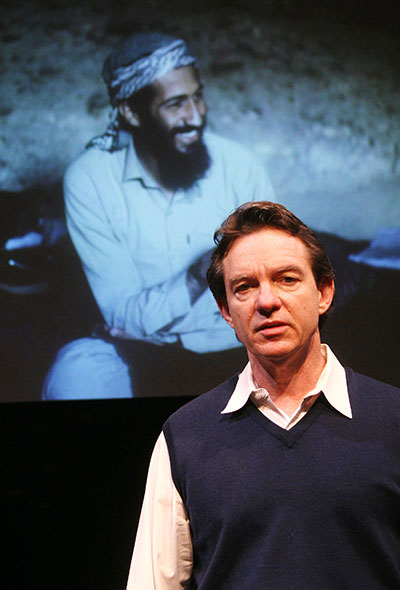 Lawrence Wright, a Pulitzer Prize winning author, has spent his career pursuing his subjects through extensive research. He spends thousands of hours recording his interviews on scores of yellow legal pads, then transcribes each string of information onto notecards which are each filed into a folder and placed into an intricate box system. At the University of North Texas’ 2014 Mayborn Conference for Literary Nonfiction, Wright described this process, after performing with his blues band, Whodo, and showing segments from his one-man show, My Trip to Al-Qaeda.

A consummate Renaissance man, the Texas native has so far written scripts for five plays and three films. His first screenplay, The Siege, a 1998 film about a terrorist attack in New York City, starring Annette Bening, Denzel Washington and Bruce Willis, all but foretold the events of 9/11.   HBO was recently quoted as saying they had nearly 160 lawyers reviewing a documentary based on his 2013 project, Going Clear: Scientology, Hollywood, & the Prison of Belief. The film premiered at this year’s Sundance Film Festival.

Thirteen Days in September is Wright’s ninth book, but he has written on a wide range of issues for publications such as Rolling Stone and Texas Monthly. He is now a staff writer for The New Yorker. In February, he will be awarded the Texas Medal of Arts for lifetime achievement in Literary Arts. He visited with A + C writer Nicole Zaza about his creative process and his Texas roots.

You started out writing about race relations in Nashville in 1971. Do you think that experience was formative for you?

When I graduated from college, I was really sheltered in terms of my exposure to people of other races. So suddenly to go all over the country writing about the struggle, not just of black people in the South but Indians in the West and…bilingual education and Chicano politics… I really got an education in terms of the ethnic quilt that America really is.  That helped me understand my country a whole lot better than I had ever understood it before. It also forced me to accommodate different perspectives. I had to understand people who had quite legitimate perspectives that hadn’t at that point been mine. I had to acknowledge that they had truth on their side. So that was an education for a young white man from Dallas that had limited exposure to other points of view.

Is there something from your childhood that formulated this interest in you?

I don’t know…About the most exposure to another culture was when we lived in Oklahoma. Sometimes I would go to the tribal dances. I had the experience of playing cowboys and Indians with actual Indians.

Were you the cowboy?

We kind of went both ways…We all carried six-shooters when we were seven…They were my friends.

How do you avoid getting lost in details of extensive research?

I think that when I am researching, I am always looking for things that are of interest to me. Go through a pile of material and go through many, many interviews. What of that do you intend to use? Of course I use notecards. I am fond of research, so I do a lot of it. So what I would write would be different then something that you might write because I am arrested by certain ideas or details that other people might not be drawn to.

You have to trust that kind of intuitive sense because that is what sets you apart as a writer. It’s not just your voice, the sound of the words coming out of your mind. It is that your inner being resonates to this story, rather than that story. You choose to put certain people forward rather than others because they exemplify what you see as being the central issue of the characters that you are writing about. All those things figure into who you are as a writer.

You are working on a new show, God Save Texas.

It’s based on a play I wrote several years ago, called Sonny’s Last Shot. It’s set in the Texas House of Representatives. It’s about the world of Texas politics. For a while, I was working with a producer to try to make it into a musical, and that didn’t go anywhere. Now, a producer in Hollywood took it to HBO and HBO got very excited about it. So now I have now been commissioned to write the pilot.

I can’t even imagine where you’d start with all the stuff going on.

I always like to draw from real events and real personalities. I always feel that reality is more interesting than stuff is that simply made up out of whole cloth. That doesn’t mean I am copying certain personalities, just Xeroxing them and putting them into the script…But, yes, my process is informed by certain issues and personalities that everybody in Texas is pretty familiar with. Certainly, it’s like a smorgasbord. I’ve got all of these personalities to work with. Texas is boiling with issues with national import. We are likely to be confronted with more presidential candidates from Texas in the next go round. Texas is like the Middle East: People have opinions about it. And what comes out of Texas tends to affect everybody’s life. 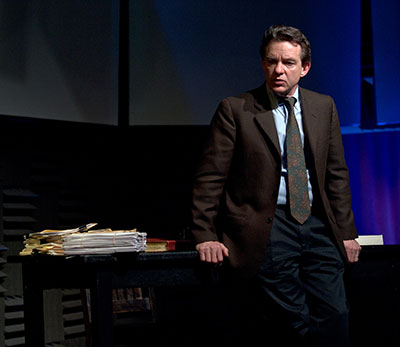 You won the Pulitzer Prize in 2007 for The Looming Tower: Al-Qaeda and the Road to 9/11. How did that change the landscape as a writer?

Well, it’s nice to be honored. I spent so much of my career being unknown. I certainly appreciate the recognition. It’s a little weird because my obituary has already been, essentially, written. I can imagine, “Lawrence Wright, Pulitzer Prize Winner…” It’s a certain marriage with a title.

There was a study done about Nobel Prize Winners and those who had been named as possible Nobel Prize winners but didn’t get it. The people who actually won the prize lived longer. The theory is that this is a certain relaxation that comes, that in some ways you rang the bell.

But the thing is, I always want to feel like my best work is in front of me and nobody else believes that. Once you’ve won a Pulitzer Prize for one thing, that was your great work. It’s probably true that The Looming Tower was a mission for me and I don’t know if I will ever have the opportunity to equal it. But I want to think I do. So I go forward with the hope that the best stuff is I am going to ever write is still waiting for me.

I would be very remiss if I didn’t ask your band Who-do. You play keyboard.

I took up the piano when I was 38 and a half in order to play “Great Balls of Fire” on my 40th birthday. It was the hardest thing I ever did in my life. I thought it was kind of a simple song, but it’s not at all. Just getting two hands to do different things at different times, it was very, very hard for me. I am still taking lessons. I know I will never be a great piano player, but I love doing it. …A friend of mind, Rico Ainslie, a guitar player…he grew up in Mexico City…he recorded the first rock and roll song in Mexico when he was a kid. Rico and I started playing some music together and I asked my sister for a blues harmonica for Christmas. So she sent me a blues harmonica, but I couldn’t play it…I don’t know why I thought I just could just pick it up and play it. One day my friend John Burnett, who is an NPR correspondent, came over and saw it sitting there and he said, “What’s this?” and I said, “Well, it’s supposed to be a blues harmonica, but apparently there isn’t any blues there.” Well, he picked it up and started playing the most profound blues and I realized that maybe he knew something that I didn’t know. So he, Rico and I started playing together. And, by that time, we realized we needed a rhythm section. This started almost 20 years ago…Rico and John are lifelong musicians and then Brian Turner [guitar and vocals], he’s a lawyer… an Aggie… he chews tobacco, he wears a cowboy hat and he’s the president and the assistant cantor at his temple…And then we have the Umstadts.  Jimi Umstadt is our bass player and his son, Christian, is our drummer. Then, finally, Ruby Jane [Smith], who is our fiddle player. When she started playing with us she was fourteen and she had already played the Grand Ole Opry. She was the youngest fiddle player to ever play the Opry. She tours with Willie Nelson and plays with us. That’s the group. So that’s been a lot of fun.