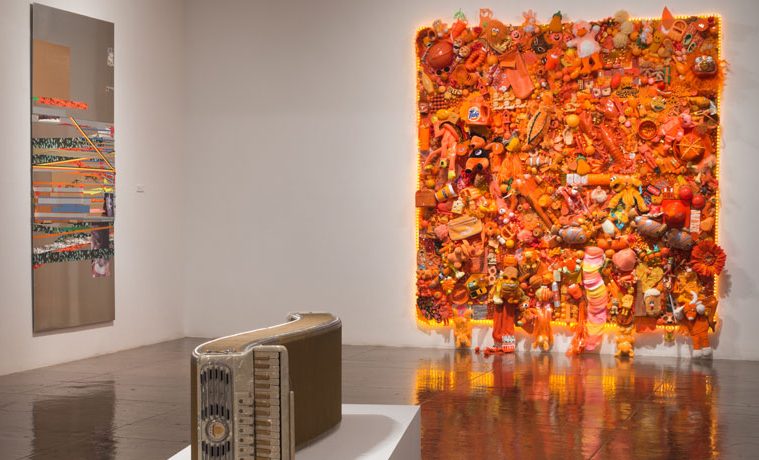 SAN ANTONIO—Gazing at Linda Pace’s Orange Crush is like flying over a monochromatic landscape of childhood – stuffed Elmos and other Sesame Street characters, Halloween pumpkins, teddy bears, plastic toys, soda cans, baby angels, and boxes of Tide. The mind can’t help but weave narratives and imagine associations for these tokens of innocence, banal yet oddly endearing, glued together in a crowded, large-scale assemblage to form a three-dimensional tapestry of memories.

For guest curator Fairfax Dorn, co-founder of Ballroom Marfa and a former interim director of the Linda Pace Foundation, Orange Crush is the catalyst of Localized Histories, showing through Dec. 29 in the Hudson (Show)Room at Artpace, the international artist residency program founded by Pace in 1993. While her fortune was made with Pace Picante Sauce, she trained as an artist and worked in drawing, painting and sculpture.

Pace began creating assemblages as a result of Jungian analysis, when she was assigned to make something using images from her dreams. Aware of the persistence of the color red in her dreams, she collected red objects from dollar stores, botanicas and flea markets all over the world. She used a glue gun and screws to attach them to plywood squares to make her first assemblage, Red Project.

“My emotional life appeared in front of me like a photograph emerging in a developer in the darkroom,” Pace recalled in Dreaming Red: Creating Artpace co-written with Jan Jarboe Russell. “The variety of objects – keys, makeup, photos, fragments of fabric and forbidden apples – described the intimate details of women’s lives.”

Red Project became a turning point in her life, leading directly to the creation of Artpace when she realized she had “a hunger for contemporary art: for creating it, buying it, making it, and, most of all sharing it with others.”

Sadly, Pace died of breast cancer in 2007, but her legacy lives on through Artpace and her foundation, the repository for her collection of more than 500 contemporary art works, many created by internationally-known artists who had residences at Artpace.

Dorn says the title for Localized Histories derives from an essay Donald Judd wrote in the mid-1960s called Local History. Judd argued that it was OK for art to be messy, and it did not have to be linear and neat, Dorn notes, and minimalism had a connection to found objects – monochromatic ready-made, mass produced, everyday objects. By this definition, Orange Crush could be categorized as minimalism. Well, maybe baroque minimalism.

Pace’s intuitive collage method also has something in common with the “cut and paste” technique James Joyce used to write Ulysses. The objects and their associations form a pool of memory and experiences individual viewers can dip into to swell their own stream of consciousness.

Dorn selected the other collage works in Local History from Pace’s collection, which is usually shown by the foundation in her former penthouse apartment at the CAMPStreet Lofts. The largest and most notable is Leonardo Drew’s #48, which the New York artist, who has a studio in San Antonio, created during an Artpace residency in 1995. Made with rows of wooden boxes covered in found fabric and treated to produce a rusted, antiquated appearance, the wall-covering is mutely monumental, enigmatic and grimly mysterious – providing a chillingly stark contrast to the playfulness of Pace’s creation.

Swiss artist Thomas Hirschhorn uses an excerpt from French author Georges Bataille’s L’Abbe’ C in his collage Relief Abstract No. 549 (Bataille) combined with cardboard, foil and packing tape that appears to be a window into the story of a tragic love triangle involving two brothers, Charles, a libertine, and Robert, a priest, who both share a passion for the free-spirited Eponine. For Hirschhorn, collage is a way to “put together what cannot be put together” in order to create something new, which he uses to explore issues of justice and injustice, power and powerlessness, and moral responsibility.

German artist Isa Genzken cut up reproductions of the famed medieval tapestries of The Lady and the Unicorn for her untitled collage featuring abstract strips of orange, yellow, black and blue that read like lines of text, perhaps a symbolic essay on romantic love.

Houston’s Trenton Doyle Hancock uses felt, plastic and other found objects to replicate the pattern of Sturd-I-Floor tiles, which he remembers from his grandmother’s house in Paris where he grew up in northeast Texas. His cuddly collage suggests a child’s scrap book. Formed by marbles, nickels and dimes, Tony Feher’s circular installation, hope i, references childhood’s randomness and risks.

Christian Marclay altered a Titano piano accordion so the squeezebox is about 8 feet long, humorously transforming the sustained notes of music into physical form. It’s one of the funnier moments in an often-poignant exhibition about artists using their personal mythology to imbue common objects with meaning and emotion.