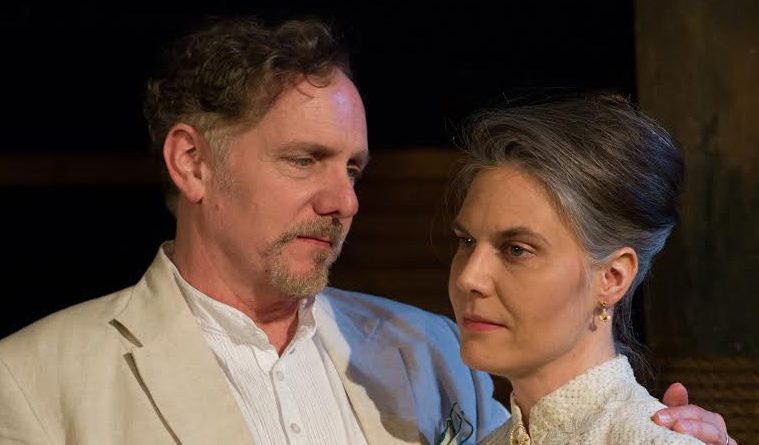 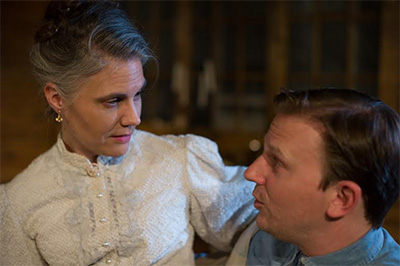 Long Day’s Journey into Night, Eugene O’Neill’s masterful family saga went a long way to defining the new (at the time) American theater as one of oppressive gloom. The autobiographical masterwork spares no punches in its brutally personal examination of the Tyrones, a theatrical family confronting their deepest vices and neuroses over the course of a day in their summer home.

As Undermain Artistic Director, (and Director of the production of Long Day’s Journey on stage at Undermain through March 6) Katherine Owens mentioned in her curtain speech on opening night, it’s fitting for Undermain to produce O’Neill; the company has a rich history of engagement with the type of American theater the playwrights of the 1950’s, O’Neill along with Tennessee Williams and Arthur Miller, helped birth, having produced countless plays deeply indebted to O’Neill’s penchant for emotional devastation.

I only wish Undermain had done it justice.

John Arnone’s rendering of a New England seaside cottage in the Undermain basement provides a lovely backdrop and stark contrast to the play’s dark subjects. Joanna Schellenberg plays Mary, the Tyrone family matriarch recently returned from her stay in a sanitarium recovering from an addiction to morphine. Bruce DuBose plays her husband James, a well-intentioned if feckless patriarch who copes with Mary’s unravelling with addictions of his own. Shelby Davenport and Josh Blann round out the family as James Jr. and Edmund respectively, the two sons who never had a chance at either peace or emotional stability.

I would be remiss not to also mention Katherine Bourne’s performance as Cathleen, the charming household maid. It’s a small part but Bourne delivers a much needed dose of levity and energy with a perfect sense of disaffection and timing.

The requisite sense of fatalism and predetermined unhappiness in the play is certainly present under Owens direction, with the actors all but resigned to their fates from the beginning. That sense of being trapped in one’s own destiny however, comes across in rather emotionless and drained performances from the cast; lines are delivered hastily and without energy which artistically might make sense, except for that it causes the performance to drag.

Schellenberg is the notable exception. Her performance as Mary is chilling: her small frame exudes gentleness, which makes her increasingly vitriolic and desperate words all the more sinister. As the play progresses it becomes increasingly clear the lip-service she pays to the well-being of her family is just that, she resents everything about her life and Schellenberg delivers Mary’s caustic attacks on her family almost as though she were speaking only to herself, perfectly encapsulating the distance of drug addiction.

“Don’t talk about things you don’t understand,” she tells her family, eliminating the possibility for connection or reconciliation.

Two intermissions never help when energy is at a minimum, and while Blann and DuBose mustered a sense of passion in some of their early lines, by the fourth act, the two’s late-night banter (despite hosting some of the more beautiful lines in the play) feels tired and emotionless. Maybe it was intentional? This is after all a play of resignation, but O’Neill’s poetic lines occasionally demand an impassioned delivery or their meaning is lost.

“The past is the present isn’t it? The future too,” Mary queries amidst one of her cruel ramblings. It’s O’Neill’s perfect encapsulation of his nihilistic view of fate and one of many poignant, gut-wrenching lines in Long Day’s Journey. Owens stayed true to the play in her direction, if only her actors had more effectively brought out the poetry of O’Neill’s words.

Any fault aside, Owens and Undermain do the city a great service by ensuring classic American theater remains alive on the stage. It’s an important and made all the more relevant given the presence of another powerful play running across town at Kitchen Dog Theater, Haley Feiffer’s I’m Gonna Pray For You So Hard, a play greatly indebted to O’Neill’s darkly pessimistic evocation of the emotional devastation we seem fated to wreak on those closest to us.